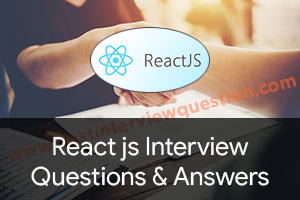 ReactJS is a JavaScript library for building reusable User interface components. It is a template-based language combined with different functions that support the HTML. Our recently updated React Interview Questions can help you crack your next interview. This means the result of any React's operation is an HTML code. You can use ReactJS to build all kinds of single-page applications.

If you are looking for a job as a ReactJs developer, we have a vast collection of React Interview Questions and Answers.

React is a JavaScript Library which is used to show content to user and handle user interaction.

JSX stands for JavaScript XML. It is a file type used by React that utilizes the expressiveness of JavaScript along with HTML. This makes the HTML file easy to understand. This file makes applications robust and boosts their performance.

Hete is is an example of JSX:

suggest an answer 0 Answer
3 0
Q. 3.How to install react js on your local machine?

1. You have to install node first on your local machine.

suggest an answer 0 Answer
1 1
Q. 4.What are controlled and uncontrolled components?

NOTE: This information is likely to be asked in React interview questions

Props stand for Properties in React. They are read-only components that must be kept pure. These components are passed down from the parent to the child component throughout the app. A child component cannot send prop back to the parent component. This can help in maintaining the unidirectional data flow and is used to render the dynamically generated data.

suggest an answer 0 Answer
1 0
Q. 6.What is the difference between createElement and cloneElement?

JSX gets transpired to createElement and React uses it to make React Elements. cloneElement is used as a part of a request to clone a component and pass new props.

suggest an answer 0 Answer
0 0
Q. 7.What is the difference between Element and Component?

A component describes what you need to see on the screen. An element is a protest representation of user interfaces. A component is a function that acknowledges input and returns a React component.

suggest an answer 0 Answer
0 0
Q. 9.What is the difference between Stateless and Stateful Component?

The Main Difference is of Syntax. Function Based component used props as an argument and is also called stateless component and In class based component we extends all the property of predefined function and used according to our need.

Class Based Component use state and the state is used as props in child component.In Class Based component we can use different lifecycle method of component.

Arrow functions, also called ‘fat arrow‘ (=>), are brief syntax for writing the expression. These functions bind the context of the components because auto binding is not available by default in ES6. Arrow functions are useful if you are working with the higher order functions.

It is compulsory for each React component to have a render(). If more than one element needs to be rendered, they must be grouped inside one tag such as <form>, <group>,<div>. This function goes back to the single react element which is the presentation of native DOM Component. This function must return the same result every time it is invoked.

suggest an answer 0 Answer
0 0
Q. 14.What is the differnece between Real DOM and Virtual DOM?

Components are the essential elements of a React application's user interface. These elements split up the entire UI into small reusable pieces, and renders these components independent of each other without impacting the rest of the UI.

States are at the heart of components. They are the source of data and must be kept simple. States determine components’ rendering and behavior. They are mutable and create dynamic and interactive components, and can be accessed via this.state().

No, React uses JSX that is similar to HTML.

suggest an answer 0 Answer
1 2
Q. 18.What is the component lifecycle in ReactJS?

Flux is an illustration that helps to maintain unidirectional data stream. It also controls construed data unique fragments and makes them interface without creating issues. The configuration of Flux is insipid, and is not specific to applications.

suggest an answer 0 Answer
1 0
Q. 22.How can we build React in Production mode?

We can utilize Webpack's DefinePlugin strategy to set NODE_ENV to production. This will remove things like propType approval and other notices. It is a good idea to reduce your code because React utilizes Uglify's dead-code end to remove advancement just code and remarks.

The server needs to be regularly monitored for updates. The aim is to check for the presence of new comments. This process is considered as pooling. It checks for the updates almost every 5 seconds. Pooling helps keep an eye on the users and ensure there is no negative information on servers.

suggest an answer 0 Answer
0 0
Q. 24.In what cases would you use a Class Component over a Functional Component?

If your component has a state or lifecycle method, use Class component. Else, a Functional component.

suggest an answer 0 Answer
0 0
Q. 25.What can you do if the expression contains more than one line?

Enclosing the multi-line JSX expression is the best option. Sometimes it becomes necessary to avoid multi-lines in order to perform the task reliably and for getting the expected results.

Yes. This is a complex process, and the best way to do it is by using a spread operator.

suggest an answer 0 Answer
0 0
Q. 28.How it is different from other front end language?

In React we divide the front end content into different components so that we can reuse the component when we need them at other place.

Component is a building block of any React app which is made by either JavaScript Function of Class. Ex. Header Component, Footer Component etc.

There are two types of Components.

suggest an answer 0 Answer
0 1
Q. 30.What is Function Based Component?

Basically Function Based Component are the component which are made by JavaScript Functions.It takes props as argument and return JSX.

suggest an answer 0 Answer
1 0
Q. 31.What are Class Based Component?

It is a cross-browser wrapper that is around the native event of the same browser. This is the most important question in react interview questions.

It is a technique that implies an exchange of ref through the components and enables descendants to receive ref and pass it.

Jordan Walke, a Facebook engineer, developed the React framework in 2011. After using it on Facebook’s news feed, it was implemented on the Instagram network. React became open source in 2013.