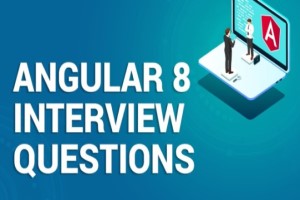 Angular is one of the foremost frameworks, has released its latest version namely Angular 8 on 23rd of May, 2019. The latest version of Angular is incorporated with unique and attractive features. In general, Angular 8 supports new and unique features such as CLI (Command Line Interface), core framework and angular material library. Angular 8 Interview Questions And Answers contain these important questions and answers. Read them carefully and score well.

Q. 1.What are the new features in angular 8?

Angular 8 it has following new features such as

In Angular 8, Bazel is a new build system and it is available for a short period of time. It is the new feature of Angular 8, which provides a platform to make your backends and frontends with a similar tool. It has the possibility to have remote builds as well as cache on the build farm.

suggest an answer 0 Answer
7 0
Q. 4.How Performance Improvements on the core in Angular 8?

Steps for the Installation of Angular 8 environmental setup

Before installing Angular IDE using Angular CLI tool, make sure that Node.js has already installed in your system.

To check the node and angular CLI version, run command ng –version on the console terminal

Steps to upgrade Angular 7 to 8

suggest an answer 0 Answer
1 0
Q. 8.What Are the features of Bazel?

The main features of Bazel are-

The working of typesofchecks in Angular 8 is similar with the enabled and disabled flag, which means if you want to test whether the selected value is an object or not, then the following syntax is used " Typeof value = = = 'object' ". In angular 8 the folwing types of checks are used such as “Typeof value.ngOnDestroy = = = 'function' “.