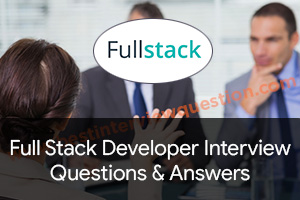 A Full Stack developer is expected to have the functional knowledge and the ability to work on all aspects involved in building an application. A Full Stack developer should be able to write front-end code in Java, HTML, and JavaScript; create APIs and write backend code in Python/Java and Ruby; work on hardware and OS; have knowledge of networking and security; understand design and query databases. Here is the list of Full Stack Developer Interview Questions that will help you to crack your interviews.

1. What is the difference between GET and POST?
suggest an answer 0 Answer
10 2
2. What is RESTful API and why it is used?

suggest an answer 0 Answer
5 0
3. What should full stack developer know?

A full stack developer should know:-

Must be proficient in multiple languages, including PHP, Java, C #, Ruby, Perl, Python, etc. Must be familiar with different ways to structure,design, implement and test the project based on languages.

Must master necessary front-end technologies such as CSS3, HTML5, and JavaScript. Additional study of third-party libraries such as JQuery, SASS, LESS, AngularJS, or REACT is also required.

Knowledge of at least one database is expected. Currently, the popular databases are MySQL, Oracle, MongoDB, SQLServer and Redis.

Basic knowledge of the principle of prototype design, UI and UX design is needed.

suggest an answer 0 Answer
6 0
4. What do you mean by data attributes and why it is used?

HTML 5 has “data-*” which are custom attributes defined by the developer. They are used when any existing characteristic is not suitable to be used. These attributes are only used on the page they are written on, and they do not need AJAX calls.

These are Global attributes, so they can be applied to any element.

Point to be noted: Go through this Q&A very thoroughly as this is one of the essential full stack developer interview questions.

The acronym ACID stands for Atomicity, Consistency, Isolation, and Durability.

Normalization means merely a process of reducing or eliminating the data redundancy. As a result, space is saved, and the consistency of data is increased.

suggest an answer 0 Answer
1 0
11. What are two phases commit in the database? Explain

Two-phase Commit (2PC) is the feature of transaction processing systems which enables databases that they return to the pre-transaction state if an error condition occurs. The two-phase commit strategy is designed to make sure that either all the databases are updated or none of them is updated. As a result, the databases remain synchronized.

Note: The following Full Stack Developer interview questions are a guide to a basic understanding of the subject. Must read for Engineers switching to Full-Stack.

suggest an answer 0 Answer
0 1
14. What is event bubbling and capturing in javascript?

Event Bubbling and Event Capturing are the ways of the event propagation in the HTML API when an event occurs in an element which is located inside the other part and both the parts have registered a handle with the recently happened event. Here the event propagation mode identifies that in which order the elements receive the event.

A Promise is an object which shows the result of the asynchronous operation. The result can be a resolved value or a reason why the process failed like “a network error occurred.

A promise can be any of the 3 states:-

suggest an answer 0 Answer
1 0
16. What is the prototype in javascript and how do you use it?

Prototypes are objects created in Javascript. They are the “parent” objects. If we want to create common tasks (properties/methods) for all the objects inherited from the parent object we need to define them in the prototype object.

Final classes cannot be subclassed; it is not open for change and can be used reliably for common execution of routines. “String” class in Java is an example of a final class. This is done for security and sometimes for efficiency.

Final methods cannot be overridden. They are not open to change. This prevents accidental changes which may result in crashing of application.

Express.js is a web application server framework. It is used for Node.js. It helps to create node.js applications in less time. It also provides security-related help for node.js.

Node.js is a server environment to be used for web development. Node.js is an open-source server. This is based on google chrome’s JavaScript engine V8.

A Callback Function is a function which is passed as a parameter to another function,.The callback function run inside of the function into which it was passed. JavaScript Callback Functions can be used synchronously, and it can also be used asynchronously. Application programming interfaces of the Node are written in such a way that they all support callbacks.

MEAN stack is a user-friendly free and open-source JavaScript software which is used for building the dynamic web sites and the web applications. The advantage of using the MEAN stack is that only language JavaScript runs on all the levels of the applications which makes it efficient.

MEAN stack is the composition of:-

suggest an answer 0 Answer
0 0
27. What do you mean by routing in angular js?

Also Read: Angular Questions and Answers
suggest an answer 0 Answer
0 0
28. What is the difference between directive and component?

Note: These are Full Stack developer interview questions. Candidates who are deciding to switch to Full Stack or looking for a job must read this.

Multithreading is the ability of the Operating system or the program to handle the multiple user requests at a time for its resources. Here a user can be a human or another program.

CORS stands for Cross-Origin Resource Sharing. It is a standard to share the selected resources between the web applications running on two different domains.

suggest an answer 0 Answer
0 0
32. How can the web application load time be reduced?

The ways to minimize the load time of a web application are:-

Common Technologies a Full Stack Developer Should Have Expertise in:

Must master necessary front-end technologies such as CSS3, HTML5, and JavaScript. Additional study of third-party libraries such as JQuery, SASS, LESS, AngularJS, or REACT is also required. These Mean Stack Interview Questions will help you prepare for your interview

Knowledge of at least one database is expected. Currently, the popular databases are MySQL, Oracle, MongoDB, SQLServer and Redis.

Basic knowledge of the principle of prototype design, UI and UX design is needed.