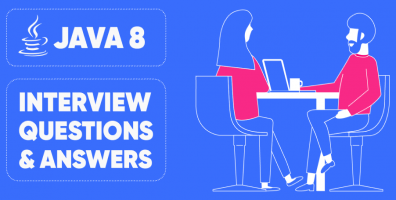 JAVA is an open-source object-oriented programming language that is secure and robust. JAVA is the language that can run on all the platforms which support JAVA without recompilation. More than 3 billion devices run on Java. JAVA is used for developing Mobile applications, Desktop applications, Web servers, and application servers etc.JAVA was developed by James Gosling at Sun Microsystems now ORACLE in the year 1995.

The Java 8 interview questions we are mentioning below will help you to gain enough of the knowledge about Fortran.

Here in this article, we will be listing frequently asked Java 8 Interview Questions and Answers with the belief that they will be helpful for you to gain higher marks. Also, to let you know that this article has been written under the guidance of industry professionals and covered all the current competencies.

1. What is the difference between intermediate and terminal operations?
suggest an answer 0 Answer
10 1
2. What is the purpose of functional interface in Java 8?

Functional interfaces are those interfaces that have a single functionality.

New features introduced in Java 8 are:-

Related Article: What are the new features of Java 8
suggest an answer 0 Answer
10 0
4. What is a Java Lambda Expression?

Lamba expression is considered as the most significant feature of Java8. A Lambda expression provides functional programming, and that has simplified the code to a great extent. A lambda expression is fundamentally a function which can be created without belonging to any class.

This is a fundamental question in java 8 interview questions.

suggest an answer 0 Answer
2 0
6. What do you mean by of String::valueOf expression in Java 8?

In java there a NullPointerException which can crash the code. It is complicated to remove the null checks from the code. Java 8 introduced Optional class in java. util package. Use of Optional class results in clean code without null checks. By using the Optional class, the programmer can specify the other value or other code to return. This makes the code more readable.

suggest an answer 0 Answer
1 0
8. What is the use of default method in interface?

The default method implementation was introduced by Java 8 so that the old interfaces can use the lambda expression without implementing the methods in the implementation class.

suggest an answer 0 Answer
1 0
9. What is the syntax and characteristics of a Lambda Expression in JAVA 8?

The syntax for the Lambda expression is:-

Characteristics of the Lambda Expression:-

Related Article: How should I start JSP and Servlet
suggest an answer 0 Answer
1 0
10. Define Nashorn in Java8.

Along with Java 8, a new improved engine Nashorn was introduced. Nashorn gives very high performance because it straightaway compiles the program code in the memory and then passes the bytecode to JVM. It uses the invoke dynamics feature of Java 7 to improve the performance.

A Spliterator is a type of Java8 Iterator in java. util package that traverses and partitions the elements of a source in Java into another Spliterator. A source can be a collection or an IO channel or a generator function

Java 8 introduced a command tool jjs for the Nashorn to execute the javascript program codes at the console.

The Stream API is used to process a group of objects. A stream is a series of objects which supports different methods that can be pipelined to produce the expected result.

The features of the stream are –

suggest an answer 0 Answer
1 0
18. Write a program to print count of empty strings in java 8?

The code to print the count of empty strings in Java 8 is:-

Point to be noted: Go through this Q&A very thoroughly as this is one of the most asked java 8 interview questions.

suggest an answer 0 Answer
0 0
19. What is sequential and parallel stream in Java 8?

Parallel streams divide the provided venture into many and run them in unique threads, making use of a couple of cores of the computer. On the other hand, sequential streams work just like for-loop the use of a single core. The duties supplied to the streams are generally the iterative operations performed on the factors of a series or array or from different dynamic sources. Parallel execution of streams run more than one iterations concurrently in extraordinary accessible cores.

Collectors perform the reduction operations. It combines the result of the processing ongoing on the elements of the stream like collecting the elements into collections, summarizing the elements according to the different criteria. Collectors return the list or a string. As a result, the readability is increased. Static import used here is static import java.util.stream.Collectors.*;

The Chrono unit was added in Java 8 to replace those integer value that was used in old API to represent the month, day, year, etc. unit is defined in the java.time.temporal.ChronoUnit

Type inference is a feature of Java that gives the capability to the compiler to seem at each method invocation and corresponding announcement to determine the type of arguments. Java provides multiplied model of type inference in Java eight

JAVA 8 is one of the versions of JAVA programming language which was released on March 18, 2014. Java8 provides supports for functional programming, new JavaScript engine Nashorn, new APIs for the date and time manipulation, new streaming API, etc. Now the coding has become simple.

Please enter your details to download Java 8 Interview Questions PDF
Click here to subscribe our email newsletter to receive updates on the interview questions and blogs.
Hey, care to share your feedback?
Visit our blog