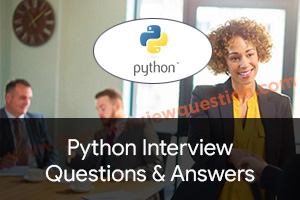 A high-level, interactive and object-oriented scripting language, Python is a highly readable language that makes it ideal for beginner-level programmers.  Here we can help you to prepare for the best Python interview questions. It uses English keywords and has fewer syntactical constructions as compared to other languages. Similar to PERL and PHP, Python is processed by the interpreter at runtime. Python supports the Object-Oriented style of programming, which encapsulates code within objects.

If you are looking for a job as a Python developer, we have a vast collection of python coding interview questions .

1. What are the main features of Python?

Here are some important features of Python:

suggest an answer 0 Answer
3 0
2. What is self variable in Python?

In Python, a self variable is used for binding the instance within the class to the instance inside the method. In this, to access the instance variables and methods, we have to explicitly declare it as the first method argument.

PEP in Python stands for Python Enhancement Proposal. The PEP 8 is basically Python’s style guide. It helps in writing code to specific rules making it helpful for large codebases having multiple writers by bringing a uniform and predictive writing style.

suggest an answer 0 Answer
3 0
4. How is it possible to share global variables across various modules?

In order to share global variables across different modules within a single program, you need to create a special module. After that, just import the config module in all of the modules of your application. This will make the module available as a global variable across all the modules.

A Flask is a micro web framework for Python based on the "Werkzeug, Jinja 2 and good intentions". Werkzeug and jingja are its dependencies. Because a Flask is part of the micro-framework, it has little or no dependencies on the external libraries. A Flask also makes the framework light while taking little dependency and gives fewer security bugs.

Note: These python programming interview questions have been designed specially to get you familiar with the nature of questions.

The process of picking can be defined as: Pickle, which is a module, accepts an object, converts it into a string, and dumps into a file using dump function.

The process of retrieving Python objects from the stored string is called unpickling.

Everything in Python is like an object. All variables hold different references to the objects. The values of references are as per their functions. As a result, the programmer cannot change the value of the references. However, he can change the objects if they are mutable.

A session allows the programmer to remember information from one request to another. In a flask, a session uses a signed cookie so that the user can look at the contents and modify. The programmer will be able to modify the session only if it has the secret key Flask.secret_key.

Related Article: Top programming languages 2019
suggest an answer 0 Answer
2 0
12. What is lambda? Why do lambda forms not have statements?

Lambda is an anonymous expression function that is often used as an inline function. Its form does not have a statement as it is only used to make new functional objects and then return them at the runtime.

suggest an answer 0 Answer
2 0
13. What is the module and package in Python?

suggest an answer 0 Answer
2 0
14. How to create an empty class in Python?

In Python, an empty class can be created by using the “pass” command. This can be done only after the defining of the class object because at least one line of code is mandatory for creating a class. Here’s an example of how to create an empty class:

suggest an answer 0 Answer
1 0
16. How is memory managed in Python?

Memory is managed by the private heap space. All objects and data structures are located in a private heap, and the programmer has no access to it. Only the interpreter has access. Python memory manager allocates heap space for objects. The programmer is given access to some tools for coding by the core API. The inbuilt garbage collector recycles the unused memory and frees up the memory to make it available for the heap space.

Note: This is a type of most frequently asked python developer interview questions.

suggest an answer 0 Answer
4 0
17. What is a negative index in Python?

suggest an answer 0 Answer
1 0
18. What is pass in Python? What are the differences between pass and continue?

Pass means where there is a no-operation Python statement. It is just a placeholder in a compound statement where nothing needs can be written. The continue makes the loop to resume from the next iteration.

suggest an answer 0 Answer
5 0
19. Why multithreading is not possible in python?

Python does not support the unary operators; rather, it supports augmented assignment operators.

The arithmetic operators it supports are as follows-

Method resolution order or MRO refers to when one class inherits from multiple classes. The class that gets inherited is the parent class and the class that inherits is the child class. It also refers to the order where the base class is searched while executing the method.

Also Read: DevOps Interview Questions
suggest an answer 0 Answer
1 0
22. What is the use of repr function in Python?

suggest an answer 0 Answer
1 0
23. Narrate the difference between Python arrays and lists.

Both lists and arrays in Python can store the data in the same way.
The difference is-

It refers to the method which adds a certain value to the class. It can’t be initiated by the user rather only occurs when an internal action takes charge. In python, the built-in classes define a number of magic methods.

A high-level, interactive, and object-oriented scripting language, Python is a highly readable language that makes it ideal for beginner-level programmers. It uses English keywords and has fewer syntactical constructions as compared to other languages.

The entity that changes the data types from one form to another is known as typecasting. In programming languages, it is used to make sure the variables are processed in the correct sequence by the function.

E.g., while converting an integer to string.

Also Read: Django Interview questions
suggest an answer 0 Answer
2 0
28. What is the type () in Python?

suggest an answer 0 Answer
1 0
29. Do you know the number of keywords in Python? Why should you know them all?

In total, there are 33 keywords in Python. It is important to know them all in order to know about their use so we can utilize them. In additon, while we are naming a variable, the name cannot be matched with the keywords. This is another reason to know all the keywords.

suggest an answer 0 Answer
1 0
30. What tools can help find bugs or perform the static analysis?

For performing Static Analysis, PyChecker is a tool that detects the bugs in source code and warns the programmer about the style and complexity. Pylint is another tool that authenticates whether the module meets the coding standard.

Decorators are specific changes that we make in syntax to alter functions.

suggest an answer 0 Answer
0 0
32. What are Dict and List comprehensions?

Dict and List are syntax constructions that ease the creation of a Dictionary or List based on iterables.

suggest an answer 0 Answer
0 0
33. What are the differences between Pyramid, Django, and Flask?

A Flask is a microframework build for small applications with more straightforward requirements. Flask comes ready to use.

Pyramids are built for larger applications. They provide flexibility and allow the developer to use the right tools for their projects. The developer is free to choose the database, templating style, URL structure, and more. Pyramids is configurable.

Similar to Pyramids, Django can be used for larger applications. It includes an ORM.

suggest an answer 0 Answer
1 0
34. How is multithreading achieved in Python?

A thread is a lightweight process. Multithreading allows the programmer to execute multiple threads in one go. The Global Interpreter Lock ensures that a single thread performs at a given time. A thread holds the GIL and does some work before passing it on to the next thread. This looks like parallel execution, but actually, it is just threading taking turns at the CPU.

The output of the following code is as below.

suggest an answer 0 Answer
8 0
37. In Python, how can you generate random numbers?

In Python, an array of random integers can be generated through the function randint () NumPy. This function usually starts with three arguments; from the lower end, the upper-end range and the number of actual integer values to successfully generate the size of the array.

suggest an answer 0 Answer
1 0
38. How web scraping is done in Python, explain in short?

The way of using the operating system dependent functionalities is an OS module. Through this function, the interface is provided with the underlying operating system for which Python is running on.

suggest an answer 0 Answer
0 0
40. What do you understand by DeQue in Python?

DeQue module is a segment of the collection library that has a feature of addition and removal of the elements from their respective ends.

It is a Python library used to optimize, define, and execute the mathematical expressions including multidimensional arrays.

There are two categories of ‘types’ present in Python, which is mutable and immutable.