Kubernetes vs Docker: Which is better?

Docker vs Kubernetes, a comprehensive primer

Kubernetes versus Docker is a prevalent topic and has been raised multiple times in the cloud-computing industries. Whether you have a non-technical background and only need a summary or jot down the finer points to make an important business or career decision, we hope this article will clarify your queries on this matter.

Before starting, you need to look beyond the puffery surrounding both of them. What these words mean is more vital to get a hold on before making business or career decisions on top of them.

The Symbiosis Between Docker and Kubernetes

The evergreen question, “What should I choose: Kubernetes or Docker?” is straightforward absurd, more like comparing apples with oranges. One is not an alternative for the other. On the contrary, Docker can run without Kubernetes and vice versa.

So, what’s the actual difference between Docker and Kubernetes?

Basically, Docker is standalone software, and it is used to run containerized applications by installing it on any computer. Containerization is a process of executing applications on an Operating System in a way to isolate that application from the rest of the system completely.

Kubernetes outdoes itself with Docker, so to speak. Now, if you have Docker installed adequately on multiple hosts (with different operating systems), you can easily leverage Kubernetes. These Docker hosts, also known as nodes, can be as simple as physical metal servers or even virtual machines.

Here are the two main reasons behind it:

So, Kubernetes is primarily used to automate the process of scaling, management, updates, and the removal of containers. In simple words, Kubernetes is known as a container orchestration platform. Although Docker is at the heart of the containerization process, it is responsible for us having containers in the first place.

The Tabulated Difference Between Docker and Kubernetes

Although both are completely independent of each other and can be used separately, we have compiled a tabulated list of differences between these two to make you understand the excellent points with clarity.

Google trends for Docker and Kubernetes 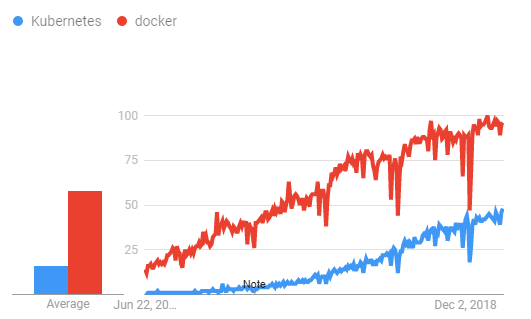 The Similarities Between Docker and Kubernetes

Kubernetes and Docker are both thorough solutions for intelligently managing containerized applications within a system and then providing robust capabilities. Both platforms are substantially different technologies.

These are some similarities that both Docker and Kubernetes have. Such as:

Now that here you have learned a bit about the similarity and difference between Docker and Kubernetes, it is safe to say that comparing Kubernetes and Docker is just illogical. Both of them have their advantages and disadvantages, what makes it better or worse is actually the way you use it.

Hopefully, now you might not be swayed away with jargon and carefully look at the application to determine whether Kubernetes and/or Docker might be a good fit.

What is the difference between django and flask?

Top 10 Python Frameworks to learn for web development in 2020

How to crack Python Interviews

Hey, care to share your feedback?
Visit our blog