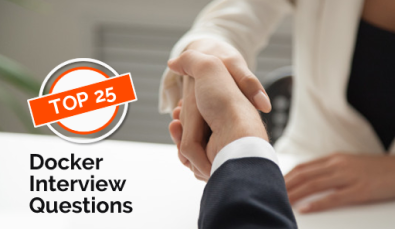 Docker hit the IT industry and enterprises in the year 2013. By the end of last year, it almost hit 10 billion container images and so is the demand for Docker and its professionals are increasing enormously. This has also resulted in an exponential rise in job openings for the same. If you want to be on top of the pre-race preparation in Docker software it is advisable to go through the advanced set of Docker interview questions. These will not only assure success whether you will achieve a supreme position amongst other competitors. So go ahead and take advantage of the below-mentioned question and answers set.

Most significant features of Docker from other competitive technologies are-

Here in this article, we will be listing frequently asked Docker Interview Questions and Answers with the belief that they will be helpful for you to gain higher marks. Also, to let you know that this article has been written under the guidance of industry professionals and covered all the current competencies.

1. What do you understand by ‘Hypervisor’?

Hypervisor refers to software which has a tendency to make virtualizations possible and it is also known as virtual machine monitor. The hypervisor also segments the host system by allocating the resources to the individual virtual environment. With this utility, the user can have various operating systems on a single host system.

Type of hypervisors are-

suggest an answer 0 Answer
1 0
2. What do you understand by Docker?

Note: As we are going through Docker interview questions and answers it is very important to have a brief over what is Docker.

Docker presents a containerization platform packaging applications along with its dependencies together in a container form. It is yours that the applications work seamlessly under any environment (no matter if it is a test, development of production). The Docker containers wrap the piece of software in an entire file system containing the essentials like code, runtime, system libraries, system tools and many more. It also wraps everything which is installed on a server guaranteeing its run time regardless of the environment.

The lifecycle of a Docker is as follows-

suggest an answer 0 Answer
0 0
4. Can you explain the Docker container?

The application and its dependencies are included in Docker containers. It can also share the kernel with various other containers running on individual processes in user space on any of the host operating systems. These containers are not bound to any defined specific infrastructure or any computer or infrastructure. They are compatible with the cloud and runtime instances of images.

suggest an answer 0 Answer
0 0
5. Explain in brief what are Docker images?

A docker image is the fundamental source of Docker container it is better to say that they are used to create the Docker containers. When the user runs these images corresponding instance for the container is developed automatically in it. These images can be used for any other Docker environment as well.

suggest an answer 0 Answer
0 0
6. Explain the concept of virtualization?

Virtualization is a process of creating the virtual session of computer storage, service or applications which are software-based. This virtual environment is created from a single segment of the physical hardware system and through it, you can split one system into various other sections acting like a separate and distinguishable system. With the help of hypervisor, this splitting is executable and the virtual session created by this medium is known as a virtual machine.

suggest an answer 0 Answer
0 0
7. Explain the constituents of Docker architecture?

The Docker architecture majorly consists of an engine which refers to a client-server application having three major components, these components are-

It is justified in Docker that the containers are made up of Docker images. These Docker images are defined in a separate registry which is known as Docker Hub. From this defined registry it is easy for the users to pick images and use them to create containers and customized images. At present Docker Hub is the world's largest public repository for image containers.

suggest an answer 0 Answer
0 0
9. Explain what are Docker objects and namespaces?

suggest an answer 0 Answer
0 0
10. Can you name a few of the important commands in Docker?

The most important commands in Docker are-

suggest an answer 0 Answer
0 0
11. Please elaborate on the benefit of using Docker over hypervisor and its unique features from other competitive technologies?

On broad terms, Docker and hypervisor form the same working but still, there is a wide range of differences between them. Docker is a lightweight technology as it raises fewer resources and also hosts kernel. Hypervisor technology creates the Colonel rather than hosting.

Most significant features of Docker from other competitive technologies are-

suggest an answer 0 Answer
0 0
12. What do you understand by Docker Swarm?

Docker Swarm is a way of orchestrating the Docker containers where Dockers can be implemented in a cluster. To support the easy monitoring and Management Docker pools can be converted into an individual Docker Swarm.

Note: This is one of the essential Docker interview questions and answers.

suggest an answer 0 Answer
0 0
13. What is the utilization of a Docker file?

A complete set of instructions that are used to pass on the Docker to help in the image build-up is known as Dockerfile. It can be also considered as a text document having all the necessary commands which are required for creating a Docker image. An automated build can also be created which executes various command lines one after the other.

suggest an answer 0 Answer
0 0
14. What is the difference between Docker and a virtual machine?

The difference between Docker and the virtual machine is as follows-

suggest an answer 0 Answer
0 0
15. Can you explain how to create a Docker container?

suggest an answer 0 Answer
0 0
16. Name a few of the platforms where Docker runs?

At present doctor is actively available on the platforms mentioned below-

suggest an answer 0 Answer
0 0
17. What is the major difference between up, run and start?

The user required Docker-compose up UP is used to start or restart the services which are defined under Docker-compose.yml. In the default attached mode, all the logs from containers will be visible to you. In detached mode composed exits by starting the container but containers pursue running in the background.

The Docker-compose run command is utilized for ad hoc or one-off tasks. They also require the services name in which the user wants to utilize run and only start the container for the same services which are dependent on the running services. It is also used to test or perform administrative tasks like removing or adding data to the volume container.

The Docker-compose start command is used to restart the containers that were created earlier but stopped. With this command, new containers cannot be created.

suggest an answer 0 Answer
0 0
18. How will you justify that Ansible can take 20X long to provision?

Docker uses cache to enhance the speed of building the project and other instances. All the commands mentioned in the Docker file are used to build other Docker containers and its outcomes are separately stored in a layer. These layers are built on top of every other layer.

Docker runs the Docker file and makes an effort to execute steps one after the other before the finalization. Developing the Docker images with a Docker file is extremely faster as compared to the provision with ansible. This is possible because of the utilization of Docker cache and supreme based images.

suggest an answer 0 Answer
0 0
19. How does cloud automation overtake containerization?

Docker containers are rapidly gaining popularity at the enterprise level and it is certainly becoming an essential part of several professional pipelines. Docker is one of the supreme and effective platforms for organizations that understand the consequences of containerization.

suggest an answer 0 Answer
0 0
20. Do you know how many containers can run per host?

In Docker, there can be as many containers defined per host because Docker does not restrict anyone of them. The only thing to be considered is that every container requires the storage space, memory and CPU supporting the hardware as well. It is also advised to consider the size of application as containers are lightweight and extremely dependent upon the host operating system

suggest an answer 0 Answer
0 0
21. Is it possible to remove a paused container from the Docker file?

No, it is not possible to remove a paused container. Before it can be removed the container needs to be in the stopped state.

This guide of best Docker questions and answers was presented to you by considering all the essentials regarding the same. This will help to increase the crackdown rate of a candidate.

suggest an answer 0 Answer
0 0
22. Explain the functioning and applications of Docker?

It is no longer difficult to fulfill your passion being in Docker software with the help of best Docker interview questions and answers. As they will completely assist you by providing the knowledge and specifications of the field. The set of questions and answers are also provided in an organized way considering the levels and increasing the chances of your selection.

Please enter your details to download Docker Interview Questions PDF
Click here to subscribe our email newsletter to receive updates on the interview questions and blogs.
Hey, care to share your feedback?
Visit our blog