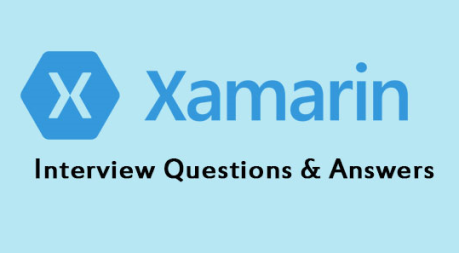 Founded in the year 2011 in the month of May, Xamarin is a cross-platform development company owned by Microsoft. It is a San Francisco based company that has created Mono, Xamarin.android and Xamarin.iOS in recent years. Xamarin has cross platforms that implement Common Language Infrastructure as well as Common Language Specifications. Codes can be shared on multiple platforms such as Windows and many more. With its growing popularity, there has been an increase in the level of Xamarin Interview questions. Xamarin has a C# shared codebase which makes it easier for the developers to write native Windows, Android and iOS applications with shared codes and native user-interfaces.

Here are some of the Xamarin Interview Questions which are frequently asked by recruiters during an interview to check the depth of knowledge of various tools and visions of the company.

Cross-platform App: Using a cross-platform, a developer can develop an app for all three mobile platforms. It uses a single code base wrapping in a native application layer. Customization of interfaces to native languages is always required.

Xamarin is basically a cross-platform technology that uses a single codebase with C# where the user can build suitable native user interfaces as well as native applications for platforms such as Windows, macOS, etc. It is a one-stop platform whose tools can be used in any of the operating systems and thus various applications can be developed which can run on these platforms without any kind of significant change in the code.

Xamarin is very unique as it uses only one language, and that language is C#, it has a class library and runtime that work throughout all the three platforms of iOS, Android and Windows phone( The native language of Xamarian is already C#). It also offers Xami support for creating a user interface.

There are several disadvantages of Xaml in Xamarin. Forms which can be explained by the following points

Using Xamarin Technology, there are two ways in which we can deliver native iOS, Android or Windows apps:

suggest an answer 0 Answer
2 0
7. Explain the working of Xamarin.IOS.

Xamarin uses a fully functional implementation of the .NET runtime known as Mono, which compiles the app into a native ARM which helps to execute the code using all the functionalities of C#. It uses all the features of C# and .NET such as memory management, .NET base class libraries, and reflection. Developers then use any of the features of the provided programming languages to create native APIs on iOS while taking care of Apple’s privacy policies.

suggest an answer 0 Answer
3 0
21. Differentiate between Editor and Entry.

Both the views help the user to enter text. But Editor, on the one hand, consists of a single line, whereas, Entry can consist of more than one line which allows pressing ENTER.

A technique that automatically synchronizes the user interface with its source of data is known as data binding. After data binding, any change made on the business model or data gets automatically reflected in the UI and vice versa.

It has gained huge popularity since its release. As of 2017, Xamarin has been observed to be used by over 1.4 million developers across 120 countries in the world. Developers wish to enter this firm for a handsome package and a huge scope of work at the same time. With proper preparation, command in coding, confidence, and presence of mind, one can bag a respectable post in this firm.