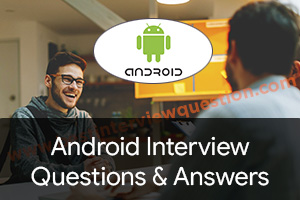 Android is a most popular mobile operating system which is not only used in mobile phone but on TV, cars, and smartwatches as well. Speaking of mobile phones, the primary function of android is to give the command to mobile applications to do the task. It’s like if you want to dial a number than android indicates Mobile to dial it. These Android Interview Questions are specially curated highly experienced industry professionals to help candidates in their future job success.

Same way, if you want to play games on the Android platform, then it’s android which gives the command to gaming application to perform accordingly. Android OS is mainly coded in Java language. All along, it is also written in other languages such as C and C++. Currently, Android could be used in more than 100 words.

Here below, we are mentioning a set of crucial Android interview questions best suited for experienced professionals as freshers to this niche.

1. What is Android? Explain

It is an open-source, Linux-based operating system which is used in mobile, phones, tablets, televisions, etc.

suggest an answer 0 Answer
2 2
3. What does ADB stands for & what is it’s primary function?

Android Debug Bridge is the full form of ADB. ADB could control sharing of files along with cut & copy function of any PC from your system with the help of a USB.

ANR stands for Application Not Responding. This pop-up comes when any application gets extra load , due to which it becomes unresponsive to open.

suggest an answer 0 Answer
2 0
5. Is it possible to share similar Linux user I’d & same virtual machine in Android . If yes how ?

Yes , it could be possible when applications are signed with one certificate.

suggest an answer 0 Answer
3 0
6. Should we change the name of a file after installing?

We should never change it as it could bring few errors in working of the application.

suggest an answer 0 Answer
2 0
7. Write down the syntax to get a view element in the program?

suggest an answer 0 Answer
0 2
8. Kindly name few of the last code given to android different versions?

Intent is sort of Instruction or information which is given to the components. Such as opening of any game, online page , send email & so on. Intent is further divided into 2 parts, which are Implicit & Explicit Intent.

Data could be moved from one activity to another with the help of bundles.
To know the coding, refer below :

suggest an answer 0 Answer
1 0
12. What is an Android Virtual Device?

An Android Virtual Device is a device configuration that is run with the Android emulator. Android virtual device is used to test an application without any mobile or a tablet. It works on Android Emulator which gives a virtual device facilities. It gives the platform to install & run the application in order to test it.

suggest an answer 0 Answer
1 0
13. What do you understand with an activity in Android?

An android toast is a form of message, which reflect for a user in terms of feedback. This message reflect for a very short time & goes away automatically.

suggest an answer 0 Answer
1 0
15. What are the storage facilities available on android?

Fragment is a section of an activity & usually called as sub - activity. Fragment functions in creating modular activity which enables multiple screen in a same time.

suggest an answer 0 Answer
0 1
17. What do you understand by ANR dialogue box?

ANR stands for Application not responding . This dialogue box appears when any application is no longer working .

suggest an answer 0 Answer
1 0
18. How could you show icon of an activity in manifest file?

To show icon in manifest file , open the ‘manifest’ & click on ‘AndroidManifest.xml’ . There we would find Application node . Just add the above code in application .

Android SDK is tool for app developers to create app for google. SDK performs the necessary actions of app development like debugging & testing.

suggest an answer 0 Answer
0 1
20. Could you name a few key components of Android?

suggest an answer 1 Answer
1 0
21. How to mention an activity in manifest file?

suggest an answer 0 Answer
1 0
22. How android is beneficial for app. developers?

Android is one of the most popular mobile platform today in the world. App. developer just needs to create and register his app on android platform. After this, any android user from across the globe could download and install his application. By just having presence on android platform, an app. developer gets huge market of ready customers.

suggest an answer 0 Answer
1 0
23. What is the core work of intent filter?

The basic function of intent is to identify & select the type of intent for any component.

suggest an answer 0 Answer
0 0
26. What do you mean by Service in Android?

A service in Android is a component which runs in the background even when the application is demolished.

suggest an answer 0 Answer
0 0
27. What do you mean by ActivityCreator?

It is a batch file and shell script which was used to create a new Android project. It is now replaced with "Create New Project" in Android SDK.

A unique Linux ID is assigned to each application in android and it is used for the tracking of a process.

It has following application components architecture.

Adb stands for Android Debug Bridge. It helps developers the power to execute remote shell commands. It's basic function is to allow and control communication towards and from the emulator port.

It is used to share information between Android applications.

Android Inc. creates an android, but Google later bought it in 2005. Currently, Android is lead by Google in Open Handset Alliance (OHA). OHA contains 84 companies around the globe, which could use the Android platform in their products.

Latest Version: Android 11.0 is the latest till date which was released on February 19, 2020