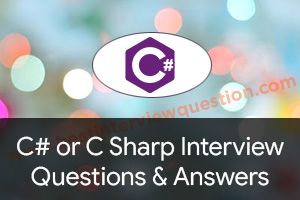 C#, sometimes also called as C sharp, is a component-oriented, general-purpose computer programming language that encompasses strong typing, declarative, imperative, and object-oriented disciplines. This information has been asked quite a few times recently in C# interview questions. It is a multi-paradigm language that was initially designed for Common Language Infrastructure (CLI).

C# allows the developers to build reusable components for a huge variety of applications. C# is an evolution or extension of C and C++ languages. However, it has taken much of its features from other programming languages as well, including Delphi and Java. When you analyze the basic syntax of C# and Java and C++, it will look very similar, which is intentional and not a coincidence.

Here in this article, we will be listing frequently asked C# Interview Questions and Answers with the belief that they will be helpful for you to gain higher marks. Also, to let you know that this article has been written under the guidance of industry professionals and covered all the current competencies.

C sharp is a component-oriented, general-purpose computer programming language that encompasses strong typing, declarative, imperative, and object-oriented disciplines. It is a multi-paradigm language that was initially designed for Common Language Infrastructure (CLI)

Why It is used for?

You can write desktop applications, Console applications, ASP.NET applications, and scalable cloud apps. These are only a few of the uses of C#; a skilled developer can do a lot more than this.

It was developed by Microsoft around the year 2000.

The term "sharp" is inspired by music notation that indicates that the musical note should be higher in pitch. This has been applied to the language C++, where "++" indicates that its performance will ideally be improved or increased by 1. The sharp symbol resembles four "+" symbols (in a grid of two-by-two), that may imply to some that C# is an advanced or improved version of C++. We have the most extensive question bank to help you answer C# interview questions.

Winforms, or Windows Forms, are a graphical user interface or application programming interface (API) that are included in Microsoft's .NET Framework.

This information is usually asked in C# technical interview questions. In C#, there are mainly three kinds of comments - single line, multiple lines, and XML comments.

This information can be asked during C# interview questions and answers.

A jagged array, also called an Array of arrays, contains different elements of a type array. The elements in a jagged array can be of different dimensions and sizes.

Value types in C# are stored in a Stack. For example, int, byte, double.

Reference types in C# are stored on a heap. For example, string, interface.

suggest an answer 0 Answer
1 0
17. How many types of constructors are available in C#?

A constructor in C# is a member function of a class that contains the same name as its parent class. This function gets automatically invoked when an object class gets created. A constructor constructs values in data members while initializing the parent class.

suggest an answer 0 Answer
0 0
18. Explain the access modifiers in C#?

This is one of the frequently asked C# interview questions.

This class is used for creating classes or objects that do not contain a specific data type. This kind of data type is assigned during the runtime.

It is a collection of keys or value pairs that contains values based on keys.

Converting a specific value type to a particular reference type is known as Boxing.

Whereas, explicit conversion of same reference types, that were created during boxing, back to the same value type is known as Unboxing.

suggest an answer 0 Answer
1 0
23. What do you mean by StreamReader/StreamWriter class in c#?

StreamReader and StreamWriter are two different classes in namespace System.IO. Both of these classes are used when the user wants to read or write charact90 and Reader-based data, respectively.

This is an essential topic in C# interview questions for experienced professionals. Some of the basic string operations in C# are Concatenate, Modify, Compare and Search.

A Delegate in C# is a variable, which holds a reference to a specific method. This also makes a delegate a function pointer of a reference type. All the Delegates are derived from the System. Delegate namespace.

Delegates are of three types -

suggest an answer 0 Answer
0 0
28. What do you mean by Synchronous and Asynchronous operations?

Synchronous is one of the ways to create a thread-safe code in C# where only one thread is able to access resources at any time.

Asynchronous call waits for a method to get completed before continuing with program flow. In an Asynchronous operation, the method call immediately returns so that the program can perform operations while the called method finished its task.

suggest an answer 0 Answer
0 0
31. What is Thread and explain states of a thread in C#?

Hiring managers will be impressed if you have this information during C# interview questions. A Thread in C# is a set of guidelines or instructions that are executed, and enable the program to do concurrent processing. The concurrent processing of a program helps the developers handle more than one operation at a given time.

The different states of thread are listed below-

In C#, you can sort an array using the Using Array.sort(array) function. This function will sort the elements in the entire one-dimensional Array using IComparable implementation for each element of the given Array.

Note: If you are preparing for a C# interview, you can read our C# technical interview questions for in-depth knowledge.

C# has grown very rapidly and is used widely. It is mostly because of its versatile syntax and cross-platform support. Developers who are trained in Java, C+ or C++ will be easily and quickly able to work in C#. We have updated our C# interview questions for freshers. The lambda expressions, nullable value types, direct memory access, delegates, and enumerations are powerful features that simplify the language C++; and on top of it, these add-ons are not available in other languages, such as Java.

Read more about recent versions if you are preparing for C# interview questions. The latest version, C# 7.3, was released in 2018.

C# was developed by Microsoft around the year 2000 within the .NET initiative. Later, this language got approved by Ecma (ECMA-334) as a standard. Designed by Anders Hejlsberg, the current development of C# is being taken care of by Mads Torgersen.

Please enter your details to download C# Interview Questions PDF
Click here to subscribe our email newsletter to receive updates on the interview questions and blogs.
Hey, care to share your feedback?
Visit our blog