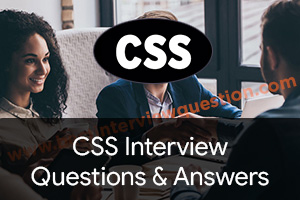 Cascading Style Sheets (CSS) is a style sheet language or a mechanism used for enhancing its style by adding colors, fonts, and spacing to your web documents. We have a collection of CSS interview questions that helps in crack your interviews. It is designed to enable the separation of content for improving content accessibility and providing more flexibility in the specification of presentation and reducing complexity in the structural content. The specifications of CSS are maintained and managed by the W3C.

Here in this article, we will be listing frequently asked CSS interview questions and Answers with the belief that they will be helpful for you to gain higher marks. Also, to let you know that this article has been written under the guidance of industry professionals and covered all the current competencies.

Cascading Style Sheets is a style sheet language which is used for describing the presentation of a document written in a markup language like HTML. It is a cornerstone technology of the WWW, alongside HTML and JavaScript. It handles the look and feel part of a webpage.

suggest an answer 0 Answer
2 0
2. What are the difference between Inline CSS & Internal CSS?

CSS can be applied to our website's HTML files in various ways. We can use an external css, an internal css, or an inline css.

Inline CSS : It can be applied on directly on html tags. Priority of inline css is greater than inline css.

Internal CSS : It can be applied in web page in top of the page between heading tag. It can be start with

A CSS selectors is used to select HTML elements based on their name,id,class and attribute. It is the part of a CSS rule that actually selects the content we want to style.

suggest an answer 0 Answer
4 0
4. How to write media query for mobiles?

In between @media screen and (max-width: 600px) { and } we can write our CSS. It can directly effect for mobile device.

suggest an answer 0 Answer
3 0
5. What is CSS Box Model and also explain its elements?

CSS Box Model is used when talking about design and layout. It is essentially a box that wraps around every HTML element. It consists of margins, borders, padding, and the actual content.

Related Article: HTML5 and CSS3 Interview Questions
suggest an answer 0 Answer
2 0
6. What is the use of @import?

@media can be used in media query to apply different styles for different media types or devices. It can be used to check many things, such as width and height of the view port.

suggest an answer 0 Answer
0 4
7. Explain the difference between CSS2 & CSS3?

CSS2 : It was released in 1998. In CSS2 designers could only use web safe fonts for being 100% sure to use fonts that would always display the same on every system. CSS2 had "simple selectors". In CSS2, the developers or designers had difficulty because the standard was not equipped with automatically breaking of the text so that it fits within a box.

CSS3 : It was released in 1999. In CSS3 designers can use special fonts like those available in Google Fonts and Typecast. CSS3 calls the components as "a sequence of simple selectors". In CSS3 has the capability to split text sections into multiple columns so that it can be read as a newspaper.

suggest an answer 0 Answer
0 1
8. What is attributes in CSS and how they used?

It is used to select elements with a specified attribute. It is possible to add css that have specific attributes or attribute values.

It is used to select elements with an attribute value containing a specified word.

suggest an answer 0 Answer
5 4
9. What are Advantages of CSS3 over CSS?

CSS3 is a new version of CSS that have various benefits from technical features and properties. From better maintenance, loading speed, and layout design properties CSS3 is much more versatile than CSS. Designers can use all these property in a simpler manner.

Tweening is a familiar term for those used to animating in Flash. With CSS animation we can use the latter, pose to pose.

With the help of !important we can override CSS properties.

It is an element which is used to style specified parts of an element. It can be used to either "Style the first letter, or line, of an element" or "Insert content before, or after, the content of an element".

There are three Types of CSS used to develop a web page.

Also Read: HTML5 Interview Questions and Answers
suggest an answer 0 Answer
0 0
15. What are the latest versions of CSS?

CSS3 is the latest version of CSS.

There are 3 font attributes which is used to write CSS.

It is used to select any type of elements in an HTML page. An asterisk ( * ) is used to denote a universal CSS selector. This is useful when we want to set a style for of all the elements of an HTML page.

Also Read: What are the Latest Features in Bootstrap 4
suggest an answer 0 Answer
0 0
20. What is float in CSS?

The float property in CSS places an element on the right or left side of its container, allowing text and inline elements to wrap around it.

suggest an answer 0 Answer
1 0
23. What are the difference between "display:none" and "visibility:hidden" in CSS?

visibility:hidden : Ithides an element, but it will still take up the same space as before. The element will be hidden, but still, affect the layout.

display:none : It hides an element as well as doesn't preserve the space.

suggest an answer 0 Answer
1 0
24. How to make scroll bars with the help of CSS?

The CSS overflow property specifies whether to clip content or to add scrollbars when the content of an element is too big to fit in a specified area.

Property of overflow is given below :-

CSS has various limitations as a programming language thats are as follows:

suggest an answer 0 Answer
0 0
26. What are the difference between "position:absolute" & "position:relative" in CSS?

Both Postions(absolute & relative) are having different features. Once we set Position then you can able to use top, right, bottom, left attributes.

An absolute position element is positioned relative to the first parent element that has a position other than static.

Absolute : In case of position absolute, an element searches for the nearest available coordinate axes among its parent elements. The element is then positioned by specifying offsets from this co-ordinates axis. It removed from document normal flow.

Relative : In case of position relative, an element creates its own co-ordinates axes, at a location offset from the view port co-ordinate axis. It is Part of document flow but shifted.

suggest an answer 0 Answer
1 0
27. What are the difference between Internal & External CSS?

nth-child(n) : It matches every element that is the nth child, regardless of type, of its parent.

It is about making a website look good on all devices like desktops, tablets, and phones etc. In responsive HTML and CSS is automatically resize a website.

The !important css rule is used for overriding the previously assigned CSS declarations.

suggest an answer 0 Answer
0 0
31. What are the difference between margin & padding?

It is a collection of images put into a single image. A page with many images can take a long time to load and generates multiple server requests. Using sprites will reduce the number of server requests and save bandwidth.

suggest an answer 0 Answer
0 0
35. What are difference between class selector and ID selector?

CSS was proposed by Hakon Wium Lie in October 1994. The first released was made public in December 1996.