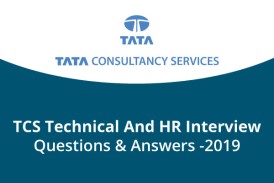 TCS stands for Tata Consultancy Services. TCS is currently the world's second-largest IT service provider. It is an Indian multinational company that particularly deals with consultancy services and information technology. The headquarters of TCS is currently situated in Mumbai, Maharashtra. It is one of the most trustable Indian brands worldwide. In 2018, TCS was ranked 11th on the Fortune India 500 list and 64th among Forbes’s Most Innovative companies all around the world (In 2015). TCS is one of the major private sector employers in India. Every year, TCS hires freshers from all over India and outside India.

Here in this article, we will be listing frequently asked TCS Interview Questions and Answers with the belief that they will be helpful for you to gain higher marks. Also, to let you know that this article has been written under the guidance of industry professionals and covered all the current competencies.

There are four basic pillars on which OOPS (Object Oriented Programming) is based. These are:

Inheritance is the process of creating new classes from the already existing classes. A coder can create a new class from one or more than one existing class taking some of their capabilities or combining all their capabilities. The already existing classes known as the parent class or the superclass and the class that is created from those parent class i.e., the new class is known as the child class or subclass. The subclass can have its own attributes and characteristics too they are not totally inherited from other classes.

Related Article Google Interview Questions
suggest an answer 0 Answer
0 0
3. How is class different from an interface?

Classes and interfaces are two different concepts which can be understood by the following points :

suggest an answer 0 Answer
0 0
4. Explain the normalization of the database, joins, and keys.

The organization of data in a database in a systematic and efficient manner is known as Normalization. There are two goals of normalization, the first one is to remove the data redundancy( removing duplicate data) and the second one is to ensure that the data dependency makes sense( only storing the data that is relevant in the tables). Both of these goals are very important because if these goals are fulfilled then the database will take less space and it will ensure that only logical data is entered in it.

Related Article Google Adwords Interview Questions
suggest an answer 0 Answer
0 0
5. What do you understand by loops?

Through loop, a statement or a block of statements can be executed several times. In a loop we can define the initial value from which the loop should start, the value till we want the loop to run and the increment or decrement counter. The process of the execution of the loop starts with the checking of the value that is going to be its key, we check if it is following the condition that we declared in the statement when we started it. Then the statement inside the loop is executed, the value is incremented or decremented accordingly. And then that value is checked again and the loop ends after the value falls out of the condition of the loop.

suggest an answer 0 Answer
0 0
6. What are Joins, Views, Normalization, Triggers?

Joins: Join is a keyword used in SQL statements to operate two tables based on the relationship between given tables in the database.
Normalization: The process used for organizing data in an efficient way is known as normalization. There are several normal forms in which data is reduced for the minimization of errors. The goal of normalization is to eradicate redundant data and to make sure that data dependencies make sense.
Triggers: A trigger can be defined as an SQL procedure that is used to initiate any action in the database through SQL command.

An Array can be defined as a data type that can store more than one element of the same type. The only condition of the data type Array is that all the elements that are going to be stored in it should be the same, for example, all of them should either be integers, floats, or characters. An Array has three basic parts, the first one is the data type that the array will follow, then the name and then size is defined, the example of how to declare an array is shown below:
int a[10]

There are several types of inheritance namely :

suggest an answer 0 Answer
0 0
10. What are the advantages of DBMS?

There are numerous advantages of DBMS :

Database Management System or DBMS is the system that is used to store and manage data in a systematic manner so that it can be extracted easily as per the need of its users and can be safe. The users can create the rules of their database according to their needs. In other words, DBMS can also be defined as the interface between the users and the application.

Data Abstraction is the process of showing only the information that is relevant for the users and hiding all the other information from them. All the software is based on the basis of the concept of Data Abstraction because there are many points that are not important for the users and if they are shown on the application console then the users will only get confused. This concept helps in showing only the essential parts of the system. There are three levels of data abstraction, Logical level, Physical level, and view level. At the logical level, we have the data administrators who deal with the data stored in the database, the physical level is the level where the data is stored physically in the database, and at the last, View level resides the end user.

suggest an answer 0 Answer
0 0
15. Explain the concept of Memory allocation in C/C++.

C/C++ uses calloc( ) function to allocate a particular amount of memory area. It comprises of two settings and the resulting length will be the product of its two parameters. Calloc works in C/C++ by filling the memory area with Zeros and then returning a pointer to the first byte. If the calloc() function fails to locate enough space it the CPU, it simply returns the NULL pointer.
The malloc( ) function is also used to allocate the memory area but its length will be the value which has been defined in the parameter. Also, memory initialization does not take place in this function.
The free( ) function is widely used to free the allocated memory once the job is done.

Please enter your details to download TCS Interview Questions PDF
Click here to subscribe our email newsletter to receive updates on the interview questions and blogs.
Hey, care to share your feedback?
Visit our blog