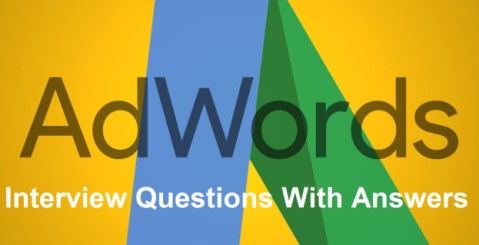 Digital Marketing has always been one of the key components in a company’s growth and development. This is one of the most emerging careers in the field of technology, as well as marketing and students from both the courses, can opt for it as their career path. Google AdWords has helped in the same by providing an opportunity to marketers in the field of SEM.

Here in this article, we will be listing frequently asked Google Adwords Interview Questions and Answers with the belief that they will be helpful for you to gain higher marks. Also, to let you know that this article has been written under the guidance of industry professionals and covered all the current competencies.

Google AdWords is an online initiative by google which focuses on advertising service which especially includes online advertising services which help the marketers and organizations reach their targeted customers instantly. When an individual searches on Google for any particular product, service or any other term, Google displays a list of results related to that searched term. But when observed closely, it can be clearly seen that the top and the bottom search results are generally advertisements of various companies related to the searched keyword.

Almost every type of ad can be run using the Google AdWords platform. Some of the categories of ads are as follows :

suggest an answer 0 Answer
1 0
3. How does Google AdWords work?

AdWords directly operated under a bidding system. The bidding system means the price of a particular advertisement. More the price, the higher will be the ranking of that Ad. The position and status of any ad are purely determined with the help of its ad rank, which is also known as the maximum Bid Times Quality Score). The ad which scores the highest ad rank gets the first position which means it will be displayed on top in ads whenever the provided keyword will be searched in Google. There is an exception in this process too.

When any marketer is the only bidder or the lowest bid in the Google Ads auction, then they have to pay their maximum ‘bid per click’. This can be understood by the fact that AdWords works on the ‘pay per click’ process. In other words, ‘pay per click’ can be defined as the terminology in which the marketer only pays the amount he/she has quoted, only if a visitor clicks their ad.

suggest an answer 0 Answer
0 0
4. What are the reasons behind using Google AdWords?

There are a number of reasons because of which Google AdWords should be used by big as well as small businesses. Some of them are as follows :

Ad Rank is a value that comes into use while determining the ad position of any particular ad. It has a specific formula and is calculated using several parameters such as bid amount, auction-time ad quality, Ad Rank thresholds, the context of the person’s search, location, device, time of the search, the nature of search terms, the other ads as well as the search results that show on the page. The Ad Rank is recalculated every time the ad becomes eligible to get displayed and completes an auction. This means the ad position fluctuates and is never permanent. It depends upon the competition in the market, the context of the users who are searching and the quality of ad at that moment.

Google ads decide what ads are to be given what position by a really fast auction that happens every time a user searches the mentioned keywords on Google search bar or visits any site which shows ads. There are several pillars on which Google Ad auction works. They decide the order as well as which ads are to be displayed and which are to be ignored or displayed later.

Considering these factors, Google AdWords creates an auction and then positions are given to various advertisements.

suggest an answer 0 Answer
0 0
7. What do you mean by Google Quality Score?

Google Quality Score is one of the most important parameters which defines the position of any ad in Google AdWords. It is the approximation of the quality of ads, keywords as well as landing web pages. It is a kind of rating of the quality and relevance of keywords and PPC ads. It enables marketers to ensure the viability of the ad to the user which is primarily based on the ad’s CTR (quality and landing page). Better the quality score, the more will be the probabilities of saving money and maintaining better ranking.

suggest an answer 0 Answer
0 0
8. What is an ad group in Google AdWords?

In Google AdWords, an Ad group is particularly the set of adoptions that operate under a specific set of keywords. Ad groups are basically used to keep the Google Ads organized. It can be considered as a huge vessel of keywords, advertisements and landing pages. If any marketer prepares AdWord Campaigns which are properly constructed, then they are rewarded by Google itself. It has always been advised to organize the keyword according to themes which gives a better structure to the account.

suggest an answer 0 Answer
1 0
9. Define conversion optimizer with the context of AdWords.

Conversion optimizer, also known as the Target CPA building, is a tool that is used for manipulating bids which decide as to which clicks on the ad can add more worth to it. Conversion optimizer usually helps in getting a better return on investment. If the advertiser or marketer sets a relatively low target CPC (Cost per conversion) for any campaign, conversion optimizer works in placing conservative bids only on those particular keywords that Google estimates to be sure in terms of their probability to convert them for the marketers. It will result in relatively cheaper conversions.

While on the other hand, marketers who specify a relatively higher CPC, the conversion optimizer may have the ability to bid more aggressively and can compete for a higher ad position with a broad range of keywords.

Related Topic: Google Interview Questions
suggest an answer 0 Answer
1 0
10. After creating an account, is there any possibility of changing options? Once a Google AdWords account is created, currency, as well as time zone, cannot be changed. Therefore it is highly recommended to fill the details carefully. As the status and success rate of an ad depends upon the geographical location as well as the country and currency to a large extent, it is very important to fill the details accordingly.
suggest an answer 0 Answer
2 0
11. How can conversion rates be improved?

Conversion rates can be improved with the help of creating ads that can match with keywords in a relevant and proper way. These can also be improved by creating tightly themed ad groups that can focus on targeting users to the campaigns which will eventually improve the conversions.

Google Ad Extensions are the add ons in Google AdWords which help in expanding the ads with additional information. This gives people more chances to choose the ad providers’ business or organization. Google Ad Extensions work in increasing the ad's click-through rate by a significant percentage. They can include any of the things such as the call buttons, location information, links to specific parts of the website, additional text information, location extensions, social annotations, seller ratings, mobile app extensions, offer ads, communication ad, review extension, Image and drop-down navigation ad extension and much more.

suggest an answer 0 Answer
0 0
13. What do you mean by brand modifier in Google AdWords? How can one denote a broad match modifier?

A brand modifier is a tool that helps the advertisement provider to create keywords that can have more reach to the target audience as compared to the phrase match. Including modified broad match keywords into the advertisement campaign can help marketers to make it relatively easier to get more and more clicks and conversions at a minimal ROI.

Broad match modifier can be denoted with the help of putting a plus sign in front of one or more than one word in broad match keywords. The words which contain a ‘+’ sign are mandatory to be there in the user search query to give the ads a boost.

suggest an answer 0 Answer
0 0
14. What are the factors that affect landing page quality?

There are so many factors that affect the landing page quality. The landing page must be of optimum and rich quality and capable of engaging a large audience because this is the main reason for building ad extensions like a landing page. Other factors are also present which include ad text and keywords in an ad group, page load times, original content, ease of navigation, contact information, privacy policy, etc.

suggest an answer 0 Answer
0 0
15. Explain the importance of the Impression share metric.

Impression share metrics are the rate of an impression of the total eligible impressions for a particular ad. These can be calculated using several major factors such as targeting settings, approval statuses, quality, etc. This data calculated can be accessed for campaigns, ad groups, product groups and for given keywords. Impression share metric is one of the most important ways to elaborate on whether the ads will contain a reach of a greater number of people if the budget or bid is increased. It is used to find out whether the ad is viable or not.

A seasoned digital marketing professional with experience in planning and executing 360 degree digital strategies for organizations in the travel & hospitality, construction, education, scientific communication industry. With 12 years of experience, Aakanksha has seen Digital grow in India from its infant stage to being a giant owning a sizable chunk of budget in every organization's marketing campaigns.

Please enter your details to download Google Adwords Interview Questions PDF
Click here to subscribe our email newsletter to receive updates on the interview questions and blogs.
Hey, care to share your feedback?
Visit our blog