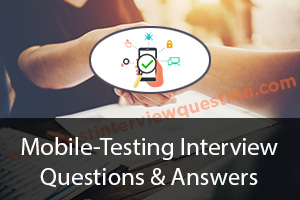 Mobile testing or mobile application testing is a process performed to test the functionality, consistency, and usability of an application software specially developed for different handheld devices and to support their operating systems, such as iOS, Android, Blackberry, Windows, etc. A thorough mobile testing process ensures that an application must best suit all the characteristics of a mobile device such as hardware & software capability, physical dimension, connectivity capability, etc.

Overviewing these Mobile Testing Interview Questions as well as individuals and the other crucial factors mentioned here can be extremely result-oriented for candidates and new learners to this niche.

For those who are looking for Mobile testing interview questions, we have also included some of the questions for them. Go through it.

Here in this article, we will be listing frequently asked Mobile Testing Interview Questions and Answers with the belief that they will be helpful for you to gain higher marks. Also, to let you know that this article has been written under the guidance of industry professionals and covered all the current competencies.

1. How A/B testing is performed for an iOS app?

The A/B testing for an iOS app includes three steps, which are:

suggest an answer 0 Answer
7 1
2. What is a Robo-electric testing framework?

The testing on Android Testing Framework for device or emulators is difficult, and sometimes may take a lot of development effort to run and build a test case, A Robo-electric framework will allow testers to run Android test directly on JVM without any need of emulator or real device.

suggest an answer 0 Answer
2 0
3. Explain the major criteria that a tester should take into consideration while performing end to end mobile testing.

Port testing is performed to test a single functionality on different devices with different platforms. There are two categories for this, Device Testing & Platform Testing.

suggest an answer 0 Answer
2 0
7. Mention some IPad and iPhone testing tools and their usability.

To test the web interface in an iPhone sized frame, we can use iPhone tester. The Appium testing tool can be used to test automation in native and hybrid iOS applications. Testers used iPad Peek to test a web application using an IPad interface.

suggest an answer 0 Answer
0 0
8. Is it possible to install an SD card in the simulator? If yes, then how?

Yes, it’s possible to install an SD card in the emulator with the below given a command.
MKsdcrd –I mySDCard 1024M mySdCardFile.img

suggest an answer 0 Answer
0 0
9. List out the networks to be considered while application testing.

The availability of defects tracking tool is just too many, but tools such as Jira, QC, Bugzilla and Rally can be used for best practices.

suggest an answer 0 Answer
0 0
11. What is the difference between a simulator and emulator.

suggest an answer 0 Answer
1 5
12. How to test the CPU usage on mobile devices?

There are various tools available in the market to record CPU performance. Testers can install apps such as Usemon, CPU Stats, CPU Monitor, and CPU-Z for best practices and receive some advanced options for help.

WAP stands for Wireless Application Protocol and it assures the reliability of the network. It makes sure that the targeted application can be deployed to other platforms for the testing purpose easily.

An automation tool should support the below-mentioned features:

The WEB testing is required for websites and portals, whereas the WAP testing is needed for the network application testing.

suggest an answer 0 Answer
0 0
18. What are the possible numbers of testings performed for a standard Android strategy?

A standard Android strategy could include unit testing, system testing, integration testing, and operation testing based on the features available within the tested mobile app. Other tests can be performed too if required.

suggest an answer 0 Answer
0 0
19. List out some of the best automated mobile testing tools available today.

suggest an answer 0 Answer
0 0
20. What are the segments of the Android testing framework?

We, testers work to find four types of common bugs; critical, block, minor and major. To example there, a phone system crash when testing a particular feature of the device will be classified as a critical bug. The GUI bugs will be categorized as minor bugs, and functional disability of a particular feature will be submitted to a major bug list. Certain performance unavailability through the device is ON will fall into the block bug list.

These also include Mobile Testing Interview Questions that can be extremely helpful for candidates soon expecting an interview opportunity in this niche. The mobile app testers either use a real device or an Emulator/Simulator for the application testing process. Both have their unique benefits, such as using a real device for mobile testing can benefit with faster processing and most accurate results, whereas using an Emulator/Simulator can be cost-effective, less latency, user-friendly, but also gets low-reliability score due to its deniability to stimulate all types of user interactions. Mobile application testing can be performed with both automation and manual modes.

To get into complete detail of mobile testing, we are mentioning some of the important Mobile automation interview questions. Go through the questions as they will help you.

For mobile application testing, these are the few primary testing procedures mostly performed:

Please enter your details to download Mobile Testing Interview Questions PDF
Click here to subscribe our email newsletter to receive updates on the interview questions and blogs.
Hey, care to share your feedback?
Visit our blog