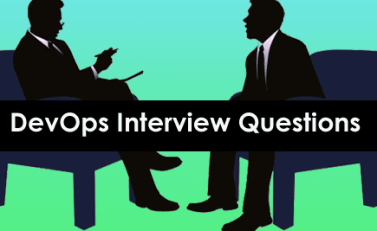 DevOps refers to a culture of software engineering which has a perfect combination of software development along with its operations. Due to its proficiency and operational philosophy, it is an incredible part of the IT segment. If you are the one looking for a profession in DevOps then you would essentially require the skills in software development as well as operations. In this article, you will get some of the best and mostly asked DevOps interview questions that are framed by experience. To build stability in this field you have to gain extreme skills and understanding with development as well as operations.

Here in this article, we will be listing frequently asked DevOps Interview Questions and Answers with the belief that they will be helpful for you to gain higher marks. Also, to let you know that this article has been written under the guidance of industry professionals and covered all the current competencies.

1. What do you understand by DevOps?

DevOps refers to the close association of development as well as operational tasks. It does not refer to a set of tools or any software framework rather it is a combination of specialized tools that help in the automation of the entire infrastructure. It also refers to the implementation of Agile methodology on development as well as operational upfronts.

suggest an answer 0 Answer
1 0
2. What is a Puppet manifest?

The basic component which is required for the Puppet configuration management policy is known as Puppet Manifest. Each of the Puppet nodes or Agents has your configuration details in their native language provided in Puppet master. The details are provided based on how resources should be configured and their terms. It also declared the resources by defining the state which needs enforcement on any note. To develop complex Puppet modules, they are considered the major building blocks.

Version control system or VCS refers to software which is utilized by the developers to work simultaneously maintaining the history of their previous as well as current actions.

Some of the salient features of VCS are-

suggest an answer 0 Answer
1 0
4. What is the significance of DevOps?

DevOps is actively used in the organizations to maintain application delivery and close alignment of services considering the business objectives. There are several reasons to adopt the technology offered by DevOps, some of them are-

suggest an answer 0 Answer
1 0
5. Can you name some core operations in DevOps for infrastructure as well as application development projects?

The core operations in DevOps for infrastructure are as follows-

For application development, the core operations are as follows-

suggest an answer 0 Answer
1 0
6. What are the performance indicators used in DevOps?

The majorly used key performance indicators (KPIs) in DevOps are-

Related Article: Python Interview Questions
suggest an answer 0 Answer
1 0
7. What are the major components and popular tools of DevOps?

The most significant tools in DevOps are-

suggest an answer 0 Answer
1 0
8. What are the significant adoptions of DevOps in the industry?

The most recognizable adoption of DevOps seen in the industry involves the utilization of agile and various developmental processes and methodologies. It also involves the demand for an increase in production release from a business point of view. Its other adoptions involve-

suggest an answer 0 Answer
1 0
9. What is the difference between DevOps and Agile?

It is almost always asked in the DevOps interview questions.

suggest an answer 0 Answer
1 0
10. What is Git, present a comparative note between SVN and Git.

Git is basically a source code management tool that can handle multiple projects with efficiency and perfection. It is utilized to store the repositories for remote servers.

Also Read: Ansible Interview Questions
suggest an answer 0 Answer
1 0
11. Can you explain Pair programming and its advantages in brief!

Pair programming is an engineering practice of the well defined and extreme programming rules. In these, two different programmers work simultaneously on one computer, on the same design, algorithm, code or test. Where one programmer acts as an "observer" while others act as a "driver", it is their shared responsibility to monitor the errors. Without any handoff, their roles can be exchanged or shifted at any point in the process.

Its significant advantage is that it helps in raising the theory among different points of view which can eventually help to increase our understanding of the same concept considering the code, algorithm or design.

suggest an answer 0 Answer
0 0
12. What do you understand by continuous integration in DevOps?

When it comes to DevOps continuous delivery and continuous integration are very important to consider and understand. Both of them are critical steps where continuous integration refers to an automated build-up that results as a generation. It is a software development practice in which members of the teams frequently line up and integrate their code which later undergoes the generation process. It is then verified carefully along with the code written by the members. Each of these integrations is then verified daily and tested as a significant part of the development process.

One of the core advantages of DevOps automation is that it manages the role of human error out of the CD equation.

suggest an answer 0 Answer
0 0
14. What do you understand by continuous testing and continuous monitoring?

Continuous monitoring is required when the application is developed and deployed in order to check for its performance. With its help, it is possible to find the loopholes or defects which might have been missed by the team earlier. Continuous testing is utilized to make the application out to reach the end-users. Without sufficient continuous testing or unit testing and automation, it is not possible to get the desired results. To validate the code and integrate them with developers it is essentially required.

suggest an answer 0 Answer
0 0
15. What do you understand by Git, mention some of its top commands?

Git refers to a distributed version control system that is used for recording the changes in source code during the time of development. It also monitors the set of project overtime and stores the required information in a structure called repository.

Some of the essential commands are-

Canary releases have the efficiency to roll out any specific feature to a subset for a developer. This release helps the developer to reduce the risk factor involved in the release of new features.

suggest an answer 0 Answer
0 0
18. What do you understand by containers, also list down their benefits?

Containers in DevOps refers to the operating systems' virtualizations. A single container can be utilized to run everything including from staging the environment into production. This also consists of the entire runtime environment for example libraries, necessary executables, configuration files, binary code and many more. Containers are streamlined in order to create, deploy, redeploy and test the applications in various environments.

There most prominent benefits are-

It is a general question asked in DevOps interview questions.

suggest an answer 0 Answer
0 0
19. What is continuous monitoring, can you name a few tools for it?

Continuous monitoring helps the developer to detect and analyze the security implications to get a better view of planned or unplanned changes. Continuous monitoring also helps to assess the vulnerabilities for errors that are in a space of threat. To deliver the information based on application performance and the patterns of usage it works better.

Some of the best continuous monitoring tools are-

suggest an answer 0 Answer
0 0
20. What do you understand by Chef Resources?

Chef resource defines a small segment of the operating system in its desired state. It also refers to a configuration policy statement that is utilized to represent the desired state of any node and then to the current configuration. All together it helps resource providers and developers.

The functions of a Chef Resource are-

If you want to build a strong career in DevOps and skills with structure approach and thoughtfulness to get certified as a DevOps engineer, we are here to help you. The industry of DevOps is advancing and hence there is an absolute requirement for a DevOps professional and engineer. With these detailed DevOps interview questions, you will be able to develop a bright career and knowledge regarding the same field.

DevOps has the efficiency to fulfill the delivery and performance requirements of companies. The companies which have adopted this technology are Google, Amazon, Etsy and the list goes on. By delivering world-class performance and security large numbers of platforms are using DevOps. Why not make your first step with the DevOps interview questions and answers and decide your journey.

Please enter your details to download DevOps Interview Questions PDF
Click here to subscribe our email newsletter to receive updates on the interview questions and blogs.
Hey, care to share your feedback?
Visit our blog