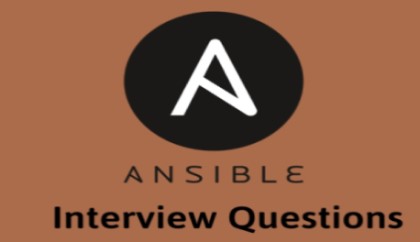 Ansible is actually configuration management and deployment tool which is largely used for a number of task automation, server configuration or application deployment procedures. If you are looking for a potential career in the same field then go through the best Ansible interview questions for better assistance. With the help of this tool number of business, segments get enhanced as it actively reduces the overheads and response time offering a number of advantages. In this guide, you will find some really helpful Ansible interview questions with answers which will help you gain more confidence.

Here in this article, we will be listing frequently asked Ansible Interview Questions and Answers with the belief that they will be helpful for you to gain higher marks. Also, to let you know that this article has been written under the guidance of industry professionals and covered all the current competencies.

1. What do you understand by Ansible please tell its utilization?

Ansible is a widely-used open source IT configuration management and deployment tool. This orchestration tool helps to provide maximum productivity gains for the majority of automation platforms also it helps in the setup and management of infrastructure and associated applications. Ansible is utilized to manage IT infrastructure and to deploy software applications directly to remote nodes.

Being an open-source deployment tool Ansible offers communication with configured lines initiating from the command line with the help of Ansible command. This phenomenon allows IT professionals to automate the configuration using any ansible-playbook command and in order to create any base directory structure, one has to use tool bundled with Ansible.

This structure is known as Ansible-galaxy. This is one of the most commonly asked Ansible interview questions.

suggest an answer 0 Answer
1 0
5. What are the available ways to install Ansible?

Using two different methods, it is easy to install Ansible.

Let us learn about the procedures in detail:

1. It can be installed using Linux's best installation architecture.

2. with the help of Python installer:

As soon as sensible that's installed on your system you can verify it with the help of command 'Ansible --version. This Ansible interview question has proved to be a tiebreaker in many conditions.

suggest an answer 0 Answer
0 0
8. Explain how do Ansible works?

Ansible also deploys modules to nodes with the help of SSH protocol and these modules get stored temporarily in remote nodes. These models can also communicate with the Ansible machines with the help of the JSON connection over the standard output.

suggest an answer 0 Answer
0 0
9. How to secure passwords in Ansible?

There is a feature named Vault in Ansible which helps IT professionals, to keep their sensitive data in encrypted files. The passwords or keys are secured extensively rather than in the form of plaintexts in Playbooks. A command-line tool named Ansible- vault tab is present in Ansible which is used to edit the files. Few common flexes are also used along with these command-line tools as ask-vault-pass or vault-password-file. In order to process the playbook containing vault encrypted files, you have to pass any of the two flags.

suggest an answer 0 Answer
0 0
10. What do you understand by Ansible inventory?

By default, Ansible has a file on /etc/Ansible/hosts containing a hostname or IP address of the targeted system. The inventory file can be specified with the help of -I

suggest an answer 0 Answer
0 0
11. What do you understand by Red Hat Ansible?

Ansible tower provided by Red Hat or Ansible, both are in the N2 and automation platform which has the capability to provide a number of features.

Ansible playbook is the actual building block supporting all of the use cases of the Ansible tool. The variety in YAML tags are divided into four major types which are known as-

Ansible playbooks are also a combined set of commands that has the capability to perform huge tasks and they are also written in YAML file format.

The web-based solution which makes Ansible an easy task for the IT professionals or teams associated with any project an easy task to operate is Ansible tower. Ansible tower is designed to act as half for the automation tasks and it is free for its uses up to 10 nodes.

This Ansible interview question comes under the advanced segment.

Ansible modules are idempotent which means it professionals can perform the task of RESTful service standpoint for idempotent operations. In this condition various identical requests became a single request end-user can create its own modules in Ansible.

There are two types of models present in Ansible-

suggest an answer 0 Answer
0 0
16. Can you explain Ansible facts?

Ansible fact is a way for tools to get data and complete information about a host and store them in the variables for their easy access. This information is stored in predefined variables that are available for use in the playbook. To generate the facts and simple techniques the setup module is as-

As soon as the statement gets executed it will print out a list of a dictionary of the facts which are available for a particular host. This is the way to access the list of available Ansible_variables. These facts can be seen as-

If a user wants to extract any particular part of the available information then the "set up" model can be used where an option is available to filter out the output and the facts which are required can behold.

Also Read: Django Interview questions
suggest an answer 0 Answer
0 0
17. What according to you is the proper way to make the content reusable?

The Ansible files can be made reusable in following ways-

In order to break or create the number of smaller files of any huge playbook imports and includes are used. Rolls are used to organize and manage multiple tasks following a package including plugin, variables, handlers and other modules. By using Ansible galaxy they can also be uploaded and shared directly.

Ansible offers a number of benefits

Please enter your details to download Ansible Interview Questions PDF
Click here to subscribe our email newsletter to receive updates on the interview questions and blogs.
Hey, care to share your feedback?
Visit our blog