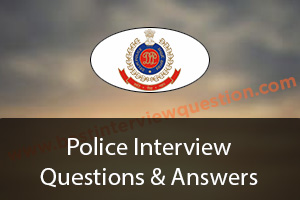 The police department is the civil force of a state which takes the responsibility of detecting as well as preventing the crime from the public. The officials working under the department, police officers or peace officers hold the duty of the maintenance of law and order in an area. These are the standard basics that are asked in Police Interview Questions and Answers. The students or the individuals must have the proper knowledge of the job responsibilities and the rules-regulations to be followed by being a part of this department.

1. What qualities make a good police officer?
suggest an answer 0 Answer
11 0
2. Why do you want to be a Police Officer?

In this Police Interview Question, the interviewer wants to judge the thought and the motive behind choosing your career as a police officer. You can begin talking about your passion, your commitment which you have towards serving the nation. You were able to see the intensity of the work and integrity required in the police department of our country. I always wish to help those people who are not capable of supporting themselves. Also, I don’t have the nature of seeing cruel people taking benefits from people with innocence. These are the main reasons for choosing this rewarding career as helping others give me peace.

suggest an answer 0 Answer
7 0
3. How do the police help the community?

Note: You can win a few more points answering this Police Interview Questions.

suggest an answer 0 Answer
9 0
4. What are the responsibilities of the police?

The primary responsibility of a policeman is providing safety to the residents of the place by enforcing the law as well as maintenance of the structure of the public safety. Also, tracking down the criminals, patrolling in the streets, directing the traffic and dealing with offenders is the other set of responsibilities of a peace officer. Out of all of them, at the top of it is working for local or state police departments and then covering all the duties which come under their job. The police officers are trained for all the job roles they need to cover while serving the nation.

suggest an answer 0 Answer
5 0
5. How long does someone have to report a crime?

There is no meaning of wasting a minute when you have witnessed or fallen victim a crime. You need to report the crime as soon as possible. There are some limitations as well in crime reporting. These are known as the statute of limitations; these are put for the proper governance of the time which goes in reporting a crime before it is “forgiven” in the eyes of the law.

The fear of being retaliated is common, but if you have fallen victim or have witnessed a crime, then you should report it without any fear.

Also Read: What is the best formal dress for men in an interview
suggest an answer 0 Answer
5 0
6. What tips would you follow to react normally in a hostage situation?

Being polite and calm are the essential skills which are required — other abilities which one should have been a police officer while witnessing a hostage situation.

suggest an answer 0 Answer
5 0
7. Tell me your reaction if a suspect offered money for you to "forget" his /her crime?

I would not tolerate any sort of corruption. If anyone would offer me any money or other related stuff, I will take strict actions against the person. It is because corruption is appreciated not from one side, but from both.

You need to be very creative and thoughtful to get good marks in this Police Interview Question.

suggest an answer 0 Answer
4 0
8. What factors influence a police officer’s use of discretion?

Police can use its discretion power in case of small offenses such as public urination and traffic incidents. Here, the officer can arrest as well as fine the offender. He can also leave him by giving only a verbal or written warning. The parameters on which Police discretion depends are as follows

If a suspect behaves disrespectfully, and does not cooperate with the policeman is more likely to get arrested. If an individual shows respect and remorse for the actions performed, then a police officer may give him a chance by only warning him against such activities. It is the most important parameter of the actions to be taken and the use of discretion as per the study conducted in the year 1964.

The more the number of criminal cases against an individual, the more intense the punishment is likely to be even on the first infraction with you. The number of convictions matters the most.

A complaint against an individual gives an idea of the situation. In that case, there might be an influence on the discretion of the police officer. Investigation with the offense has to be carried out with care when there is any complaint lodged against the individual.

The attitude of Parents/Guardians

It is another factor which might influence the level of the discretion of a police officer. It is evidence as per the study by Bynum and Thompson. The care, interest in cooperation with the captor by the parents can change the whole scenario, and the actions might become informal.

System variables are a part of the list of the influencers of the police officer’s discretion. A policeman becomes more lenient in case of the backlogging of the court and correctional systems. The police department gets into more strict actions when the city needs funds and revenue.

suggest an answer 0 Answer
4 0
9. What does police officer do on a daily basis?

Note: These are basic police interview questions and answers which are a must for candidates preparing for Interviews/jobs.

suggest an answer 0 Answer
5 0
10. Explain the various levels that a police officer must keep in mind while interacting with a criminal?

Here are some of the best practices police officers should follow while interacting with a criminal:

suggest an answer 0 Answer
5 0
11. What do police officers say when arresting someone?

Being a police officer, you can remain silent. You need to take care of your words at that point of time as your words can be used against you in a court of law. You can say that you can consult with a lawyer who can be available to you while questioning process. You can inform the availability of the lawyer in case of out of the affordability.

suggest an answer 0 Answer
5 0
12. Why do you think you are the best candidate for the police officer position?

Working with law enforcement is not everybody's dream job. There are many unpleasant scenarios a police officer has to go through. To make sure that you are the right candidate, you need to show your interviewer that you have what it takes to be a good police officer.

Start with some real-life experiences and how you think it reflects on you as a person fit for the job. You need to show them your respect for law enforcement and the police force. Try showing your previous experience if any, your ability to work with different kinds of people and most important of all, your willingness to learn and grow while on this job.

suggest an answer 0 Answer
7 0
13. Your supervisor gives you a direct order that you know is against department policy. What do you do? What if the order was against the law?

If you are ever in a situation where you are being forced/coerced by your supervisor to look away from the law/directly break a law, you must be alert about it and try to understand the reason behind it. Do not fret and directly file a complaint with the Department of Justice explaining them clearly as to what happened between the two of you and what does he expect you to do ahead.

suggest an answer 0 Answer
6 0
14. What challenges are you looking for in this position?

Challenges faced in a position for a police officer are many:

But, aside from these threats, you should explain to the interviewer how the honor of wearing that uniform supersedes all of those shortcomings and make you proud to be a police officer.

suggest an answer 0 Answer
5 0
15. What physical training activities are you currently involved in?

In order to pass as a police officer, you must be able to successfully complete the Physical Abilities Test (PAT) which would consist of the following physical activities:

suggest an answer 0 Answer
4 0
16. What would you do if you witnessed a robbery in progress?

If you are/have witnessed a crime follow these steps carefully:

suggest an answer 0 Answer
5 0
17. You are off duty. At a restaurant the owner recognizes you as a police officer that patrols the neighborhood. The owner says, "Good job. Keep my restaurant safe ok?", and then writes no charge on your bill. What will you do, if anything?

I respectfully decline his offer to waive my restaurant charges only because I’m the patrolling officer. I reply back to him “ Thanks for your offer, but as an officer of the law, it is my duty to protect citizens and their rights. I cannot accept this as it is my job to do so, but thanks again.”

suggest an answer 0 Answer
5 0
18. What actions would you take as a Police Officer to insure good relations with the public in the area that you patrol?

Police and community relations are vital to effective policing by law enforcement. You must think of these factors while communicating with the public in your area of jurisdiction:

Note: This is a type of most frequently asked Police interview questions.

suggest an answer 0 Answer
2 0
19. Would you arrest a police officer who is performing a crime?

Yes, being an officer of the law, it is your duty that each and every person follows the law. If you have reasonable doubt or have witnessed a law enforcement officer committing a crime, you have the right to arrest him/her.

suggest an answer 0 Answer
2 0
20. Would you follow an order by a superior, if you know it is against the regulations?

No, if the order given to me by a superior anyhow violates or breaks the law, I as a law enforcement officer must not only not follow that order, but, also report this incident to a superior officer or maybe even lodge a complaint as per the seriousness of the said crime.

suggest an answer 0 Answer
3 1
21. Would you give your sister a speeding ticket?

Yes, if my sister is found to have violated the speed limits while driving a vehicle, it is my duty to follow the law correctly and her a speeding ticket.

They don’t have any definitive number of working hours. Representing the civil authority of the government is the primary role that a police officer needs to play. Apart from that, taking the responsibility of public safety, investigation of the criminal activities is to be done by a peace officer.

The police force was created in the year 1822 by Sir Robert Peel in England who became the home secretary that year. Improving the public law for the enhanced quality and the security of life was the motive, and for that, the Metropolitan Police Act of 1829 was started. The developmental history of the police department is another Police Interview Question asked commonly.