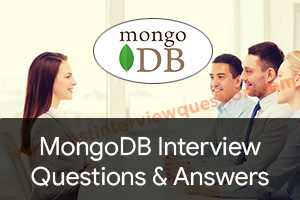 Based on the document-oriented NoSQL database, MongoDB is an open-source database management system (DBMS) that is used for high volume data storage. MongoDB is one of many non-relational database technologies that came up in the mid-2000s for use in big data applications and other processing jobs. Instead of using tables and rows as in other databases, MongoDB architecture uses documents and collections. We have an impressive collection of MongoDB Interview Questions and Answers that is a must-read for all developers!

Here in this article, we will be listing frequently asked MongoDB Interview Questions and Answers with the belief that they will be helpful for you to gain higher marks. Also, to let you know that this article has been written under the guidance of industry professionals and covered all the current competencies.

suggest an answer 0 Answer
0 0
2. What is MongoDB and how it works? Explain

MongoDB is an open source database management system (DBMS) that is used for high volume data storage. MongoDB is one of many non-relational database technologies that came up in the mid-2000s for use in big data applications and other processing jobs. Instead of using tables and rows as in other databases, MongoDB architecture uses documents and collections.

suggest an answer 0 Answer
0 0
3. What are the uses of MongoDB? Explain

MongoDB is used for high volume data storage. MongoDB is one of many non-relational database technologies that came up in the mid-2000s for use in big data applications and other processing jobs. MongoDB is more faster than others because it allows users to query in a different manner.

In MongoDB, a record is a document, which is a data structure composed of field and value pairs. It is similar to JavaScript Object Notation objects

suggest an answer 0 Answer
0 0
4. Is MongoDB better than Mysql? Explain

suggest an answer 0 Answer
1 0
5. When was MongoDB founded and why it is called MongoDB?

MongoDB originally dubbed “p”, the database was officially named MongoDB, with “Mongo” being short for the word humongous. After received many inputs about MongoDB, the company decided it scrap the Babble project and release MongoDB on its own as an open-source database platform in 2009.

In MongoDB, Binary Interchange and Structure Object Notation (BSON) objects are stored in a collection. The combination of collection and database names is called a namespace. All documents in MongoDB belong to a namespace.

An Index is a special structure in MongoDB. It stores a minimal portion of data belonging to a specific field in a form that is easy to traverse. This feature is ordered by the value of a field, which is pre-specified in the index.

The primary role of an Index is to offer great performance read operations for queries that are used frequently.

CRUD in MongoDB refers to the fundamental operations - Create, Read, Update, and Delete.

suggest an answer 0 Answer
0 1
13. What is sharding in MongoDB? Explain

MongoDB uses the method of sharding for enabling deployments of large data sets and operations that demand high throughput. This method allows data to be stored across different machines.

suggest an answer 0 Answer
0 0
14. How do I create a collection in MongoDB? Write it's syntax

In MongoDB, developers do not need to create a collection. It will get created automatically when a document will be inserted.

The syntax for creating a collection in MongoDB is: db.createCollection(name,options)

suggest an answer 0 Answer
1 0
15. How do I drop a collection in MongoDB? Write it's syntax

To drop a collection in MongoDB, connect to the database where you want to delete the collection.

Related Article: SQL Interview Questions
suggest an answer 0 Answer
0 0
16. How we can create an index in MongoDB?

You can use the db.collection.createIndex() method for creating Indexes in MongoDB.

suggest an answer 0 Answer
0 0
17. What is the command which are use to drop database in MongoDB?

The command - db.dropDatabse() is used for drop databases in MongoDB.

The limit() method in MongoDB is used for limiting the records in different databases.

Yes. You can use GridFS function in MongoDB for storing as well as retrieving large files such as Images, audio files, and video files.

suggest an answer 0 Answer
0 0
20. What are alternatives to MongoDB?

You can consider CouchDB, Cassandra, Riak, Redis, and HBase as some of the decent alternatives to MongoDB.

A Replica Set in MongoDB is a group of instances that maintain similar data sets. These type of sets are essential for production deployments as they offer high availability as well as good redundancy.

10gen software company started developing MongoDB in 2007 as one of the components of a platform as a service product. However, in 2009, the company moved to an open-source development model and changed its name to MongoDB Inc in 2013. The company made is first release public on February 2009.

Whether you are a fresher or an experienced MongoDB developer, these MongoDB interview questions and answers are all you need to succeed in your next interview.

Are you looking to impress your boss and grab the upcoming promotion at work? Here are the most common MongoDB interview questions to help you do that.

Please enter your details to download MongoDB Interview Questions PDF
Click here to subscribe our email newsletter to receive updates on the interview questions and blogs.
Hey, care to share your feedback?
Visit our blog