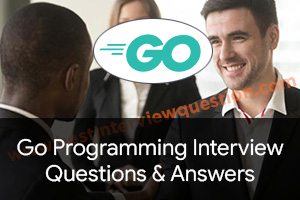 An open-source programming language developed by Google, Go is designed for building fast and reliable applications. It is a statically-typed language that has a similar syntax to C.  This information has been asked quite a few times recently in Golang interview questions. Some of its main features include dynamic typing, rich library, a documentation engine called GoDoc that is used by the entire Go community, static code analysis, and built-in testing tools that are simple and efficient.

Here in this article, we will be listing frequently asked Golang Interview Questions and Answers with the belief that they will be helpful for you to gain higher marks. Also, to let you know that this article has been written under the guidance of industry professionals and covered all the current competencies.

1. What is concurrency Golang?

Generally, large programs are made of many multiple small subprograms. For example, a server handles multiple requests made via web browsers and serves HTML web pages in response. In this case, each request made is considered as a small program.

Golang makes it possible to run smaller components of each of these programs simultaneously through concurrency. It has extensive support for concurrency using goroutines and channels

suggest an answer 0 Answer
3 1
2. How are interfaces implemented in Golang?

Golang language interfaces are different from other languages. In Golang, type implements an interface through the implementation of its methods. There are no explicit declarations or no “implements” keyword.

suggest an answer 0 Answer
6 1
3. How to swap two values in golang?

Golang's small syntax and concurrency model make it a without a doubt speedy programming language. Golang is compiled to machine code and its compilation system is very fast. Go additionally hyperlinks all the dependency libraries into a single binary file as a consequence putting off the dependency on servers.

To check if the array is empty follow these steps:

Check with the builtin len() function, for example, len(slice) <= 0. If the array is empty, skip the for a loop.

Note: This information is usually asked in golang interview questions.

suggest an answer 0 Answer
5 1
8. What are channels and how can you use them in Golang?

In Golang, a channel is a communication object which uses goroutines to communicate with each other. Technically, it is a data transfer pipe in which data can be transferred into or read from.

It is a function that runs concurrently with other functions. If you want to stop it, you will have to pass a signal channel to the goroutine, which will push a value into when you want the function to finish.

suggest an answer 0 Answer
0 0
12. How will you access command line arguments in a GO program?

The command line argument can be accessed using the os.Args variables.

In Golang, the Cgo lets all the Go packages call a C code. With a Go source file written on some special features, the cgo makes an output in Go and C files which can be then combined into a single Go package bundle.

suggest an answer 0 Answer
1 0
14. What is difference between concurrent and parallel in Golang?

suggest an answer 0 Answer
3 0
17. Why does my Go process use a lot of virtual memory?

The Go memory allocator preserves a significant portion of virtual memory for allocations, which is local to the specific Go process.

"false" is the default value.

Here are some of the built-in supports:

suggest an answer 0 Answer
2 1
23. What is the usage of break statement, continue statement and goto statement?

Continue statement: It helps the loop to omit the remainder of its body and retest before repeating.

Goto statement: It transfers control to the statement

Every GO program is built of packages that are used to organize source code for readability and reusability. Packages make it easy to maintain applications. The abbreviation for a package is “fmt”.

No. Maps are reference types.

It is used for loop to iterate over items of slice array, map or channel.

A particular type known as type switch is used to check variable type at runtime and switch.

When a pointer is assigned “nil”, it called a nil pointer. It is a constant with a “zero” value defined in standard libraries.

suggest an answer 0 Answer
0 0
30. How will you document libraries?

Godoc extracts package documentation from the source code that can be utilized on the command line or the web. An instance is golang.org/pkg/.

suggest an answer 0 Answer
0 0
31. How is actual parameter different from the formal parameter?

Actual parameters: Parameters that are sent to the function at the calling end.

Formal Parameters: Parameters that are at the receiving of the function definition.

Loop Control Statements: These statements change execution from the typical sequence. When an implementation leaves a scope, every programmed object gets diminished.

The Infinite Loop: A loop will turn into an infinite loop if its condition is never false. It is possible to create endless loops by keeping the conditional expression empty.

suggest an answer 0 Answer
0 0
33. What is a modular programming language?

It is a strategy for creating software by separating the functionality of a program into a different independent and exchangeable modules that are clubbed together to achieve the final software.

This is an essential topic in GO interview questions and Answers.

Go Array allows programmers to define factors that can hold information of a similar kind yet not give any strategy for building size or for getting a sub-exhibit. Slice takes care of this limitation. It provides utility functions needed on Array and is a part of Go programming.

It is one of the data types that allow programmers to combine data items of different types. There are two types of structure - type and struct. Once you set up a structure, you can use it to declare variables.

It is a way to identify the behavior of objects. Developed with the help of “type” followed by the name and keyword, it is used to represent a pair by furnishing information stored in interface and pointer.

It is used to check values that are held by interface type variable. It is also used to convert various GO types.

suggest an answer 0 Answer
0 0
38. What is the syntax for creating a function?

func function_name( [parameter list] ) [return_types] {
// the body of the function
}

suggest an answer 0 Answer
0 0
39. How we can print type of a variable in Go Programming?

A token is either a keyword, an identifier, a constant, a string literal, or a symbol in GO Programming used.

Are you looking for Golang Interview Questions? As a developer, you would want to know the best possible Questions that you might be asked in your Job Interview.