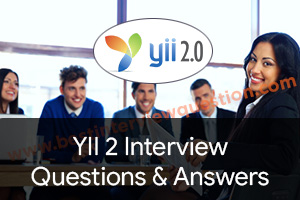 Yii 2.0 is a component-based and high-performance PHP framework for developing modern-looking and robust web apps. It is a generic programming framework and can be used for producing all kinds of web apps using the PHP framework. We will discuss a few of the most frequently asked Yii2 interview questions further here for your acknowledgment.

Similar to other PHP frameworks, Yii also implements the Model-View-Controller (MVC) architecture. Yii is based on the approach that code must be written in the most straightforward way possible. It is a full-stack framework that offers proven features, such as query builders, multi-tier caching support; RESTful API development support; etc.

Due to component-based architecture, this framework is appropriate for developing large-scale comprehensive apps such as online forums, e-commerce websites, portals, and content management systems (CMS). A vast variety of Yii2 interview questions are also available on our website.

Yii 2.0 is a rewrite of Yii 1.0 and adopts the latest features and protocols, such as Composer, namespaces, PSR, traits, etc.

Here in this article, we will be listing frequently asked Yii 2 interview questions and Answers with the belief that they will be helpful for you to gain higher marks. Also, to let you know that this article has been written under the guidance of industry professionals and covered all the current competencies.

It is a generic programming framework and can be used for producing all kinds of web apps using the PHP framework.Yii is based on the approach that code must be written in the most simple way possible. It is a full-stack framework that offers proven features, such as query builders, multi-tier caching support; RESTful API development support; etc.

suggest an answer 0 Answer
10 1
2. What is the directory structure of YII2?

suggest an answer 0 Answer
3 1
3. What are the new features acquired in YII2?

Some of the new features of Yii 2:

suggest an answer 0 Answer
1 0
7. What are the system requirements to install YII2?

It is a code-generator, web-based module in Yii 2, which helps the developers in creating and generating fully customized models, forms, and CRUD for databases.

Yii offers different classes that can simplify common coding tasks, including string and array manipulations or HTML code generation. These classes are called helper classes and are placed under the yii\helpers namespace. They are static, which means they only contain static properties and methods and you must never instantiate them.

Active Record offers an object-oriented interface that helps the developers access and manipulate data stored in the databases. This is associated with a database table and corresponds to a row of the same table. This is one of the common Yii2 interview questions.

suggest an answer 0 Answer
1 1
11. How to get current action & controller name in YII2?

Developers can get the controller name in Yii2 throigh this method -

We can also get current action through this method:
echo Yii::$app->controller->action->id;

findAll(): It gives us a list of active record models that match the specified conditions.

find(): It returns a single record using the primary key.

DateTimePicker is a widget in the Yii2 wrapper for Bootstrap DateTimePicker plugin. This plugin is specially styled for Yii 2.0 and is similar to DatePicker widget except that it adds time functionality. This widget also allows degradation to an HTML text input if your browser is not supporting JQuery.

A flash message in Yii 2 is used to keep a message in session through requests of the same user. By default, a flash message is removed from the session after it has been shown to the user. You can set the Flash messages through setFlash() Method

Unlike other frameworks, Yii is not created by a single individual. Its creation and development is the result of continuous support and feedback by a determined core team, as well as a vast online community of professionals.

In October 2014, The first stable release of Yii 2.0 was done. You may be asked this information in your Yii2 basic interview questions.

The latest version is 2.0.16, which was released in January 30, 2019. You must read in-depth about this if you are preparing for Yii2 interview questions for experienced developers.

My name is Umesh Singh having 7+ experience in Node.JS, React JS, PHP, Laravel, WordPress, MySQL, JavaScript, HTML and CSS etc. I have worked on around 20+ projects. I love programming, coding and most of my time goes in learning the best ways to write clean code. When I am not found coding, I can be seen helping out tech geeks. I am always open to help you.