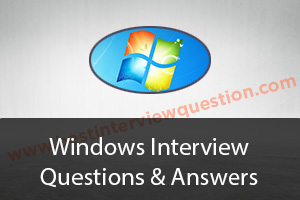 A series of Operating systems developed by Microsoft Corporation, Windows is widely used for PCs and laptops. It has a built-in graphical user interface and comes with a desktop to view files and folders in a more organized and more comfortable manner. Check out our Windows interview questions to know how Windows has revolutionized the computer industry and how it can be used both for home and professional purposes. Windows can be easily installed on various hardware systems. Starting Windows 7, the OS allows touchscreen features, which makes it usable on tablets and phones other than computers. Most organizations prefer Windows as their OS because of the ease of use and software availability.

Want to crack essential interviews? Check out our comprehensive list of Windows interview questions below.

Here in this article, we will be listing frequently asked Windows Interview Questions and Answers with the belief that they will be helpful for you to gain higher marks. Also, to let you know that this article has been written under the guidance of industry professionals and covered all the current competencies.

Five main functions of an OS are –

suggest an answer 0 Answer
7 0
4. Why do we need windows on the computer?

We need windows because it is

suggest an answer 0 Answer
5 0
5. What is the difference between window and windows?

Understand how Windows works, with our easy to understand answers about Windows interview questions.

suggest an answer 1 Answer
6 0
6. What are the types of Windows operating system?

There are 3 main types –

suggest an answer 0 Answer
2 0
7. What is a Windows server used for?

Windows server is used for machines that host websites and support more users at the same time. They can handle heavy loads that can be run as background processes, unlike windows PC that interacts directly with users.

How can I see all IP addresses on my network using CMD?

suggest an answer 4 Answer
9 11
10. What is Active Directory and how does it work?

Active directory is a domain service provided by Microsoft to store information about network objects. This information is then readily available to network admins and users. Active directory supports distributed environments. The objects can be users, devices, passwords, computers, etc.…

Please enter your details to download Windows Interview Questions PDF
Click here to subscribe our email newsletter to receive updates on the interview questions and blogs.
Hey, care to share your feedback?
Visit our blog