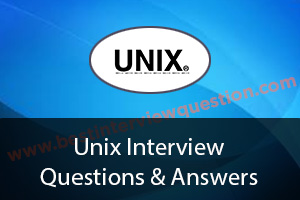 Unix is a stable and secure operating system that is capable of handling commands from multiple users at the same time. The innermost level of the Unix environment, Kernel coordinates the computer internals and allocates all the resources. Users can communicate with the kernel through a program known as a shell, which translates commands written by the user into a language that the kernel can interpret. Want to clear interviews in one shot? Read our Unix interview questions.

Here in this article, we will be listing frequently asked Unix Interview Questions and Answers with the belief that they will be helpful for you to gain higher marks. Also, to let you know that this article has been written under the guidance of industry professionals and covered all the current competencies.

1. What are the file permissions and access modes in Unix?

There are three types of permissions – owner, group and other (public), all of which can be listed using the command ls -l. Each user can have one or more of the following access – read (r), write (w), execute (x). Example, -rwxr-xr-- represent the file permissions for owner, members and everyone else as –

Unix is an operating system that supports multitasking and multi-user capabilities. Unix provides a simple and user-friendly interface for users. It is the first OS to be written in high-level (C) programming language.

The filter is a program that gets its data from the input stream and prints the results to the output stream. Examples – grep, sort, tail, head, cut, etc.…

The kernel is the central control of Unix. Kernel is the first part to be loaded when the OS loads and remains throughout the session. It executes processes, manages memory and handles interrupts and system calls. It provides drivers for controlling the hardware.

Unix can be installed on Windows 10 using VirtualBox, an open source virtualization tool.

Alternatively, you can install Unix in dual boot.

suggest an answer 0 Answer
0 0
7. How is Unix different from Linux?

suggest an answer 0 Answer
0 0
8. What are the essential features of the Unix operating system?

Continue reading our Unix interview questions list to know more about each of these features.

suggest an answer 0 Answer
0 0
9. What are different types of files in UNIX?

The different types of UNIX files are –

You can use the following commands to compare two files –

suggest an answer 0 Answer
0 0
12. How to find out what processes are running in the background in Unix?

Type the command jobs to see the processes running in the background.

Use the command kill along with the process id (PID) to kill a process.

Shell is a program that gives us an interface between the Unix OS kernel and user. By this interfacing, the user can execute utilities and applications using the shell. Each user gets a unique shell when he logs in or opens a console. The different shells are Bourne shell (sh), C shell (csh), the Korn shell (ksh), GNU Bourne-Again Shell (bash).

Some system variables set in Unix by default are HOME, USER, HOST, DISPLAY, and PATH. These can be environment variables or local variables enabled by the shell.

To find the path, use the command – echo $PATH

suggest an answer 0 Answer
0 0
19. What command is used to switching between users in Unix?

Use the ‘su’ command to switch between users in Unix.

You can check logs in the file syslog located in /etc/syslog.conf

A process, whose parent process terminates, finishes or crashes and doesn’t exist anymore is called orphan process. They are adopted by the init system process.

You can use the zip command to zip files in Unix.

To stop an infinite loop, kill the process using the ‘kill PID’ command.

In our list of Unix interview questions, we have covered all the essential aspects of Unix. Read on to know more.

Unix was developed at AT&T Bell Labs by Ken Thompson and Dennis Ritchie in 1979. The first portable version of Unix was V7. Check out our Unix interview questions list to understand how Unix processes command written by the user.

Please enter your details to download Unix Interview Questions PDF
Click here to subscribe our email newsletter to receive updates on the interview questions and blogs.
Hey, care to share your feedback?
Visit our blog