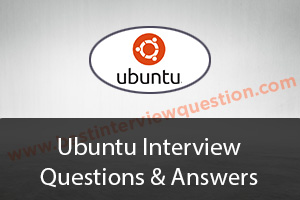 Ubuntu is free of charge, globally available and open-source Linux operating system, capable of web surfing, document creation, email read and more. This operating system is highly customizable and built on the ideas of Ubuntu Manifesto; the software should be available without any cost, the software tool should be available in the local language of the user and should be used despite any disabilities, and the freedom to customize the software according to their fit. All the popular ubuntu commands have been put together which will be handy if you want to crack an interview. Similar to other operating systems, Ubuntu has its own set of command lines at disposal to help users interact with the Linux interface. Ubuntu commands questions are common among IT sector interviews.

Here in this article, we will be listing frequently asked Ubuntu Commands and Answers with the belief that they will be helpful for you to gain higher marks. Also, to let you know that this article has been written under the guidance of industry professionals and covered all the current competencies.

1. How do I check my current version of Ubuntu?

To check the current version of Ubuntu, we have to follow these steps:

suggest an answer 0 Answer
0 0
2. What are the Minimum System Requirements to install Ubuntu?

The minimum system requirements for Ubuntu are as following:

Ubuntu is a South African ethical ideology which comes from the Xhosa and Zulu languages and roughly translates as “humanity towards others.” As the platform is based on free software and shares the belief of connectivity to all, the name “Ubuntu” is best suited for it.

suggest an answer 0 Answer
1 0
5. What are the basic commands in Ubuntu?

Advance Linux interview question and suggested answers for them to be followed by freshers and experienced.

suggest an answer 0 Answer
0 0
7. How do I get help in Ubuntu terminal?

We can use the following ways to get help in the Ubuntu terminal.

suggest an answer 0 Answer
0 0
8. What is sudo command in Ubuntu?

Sudo or “superuser do!”used to run commands in Ubuntu with elevated privileges, which are required to perform specific administrative tasks.

suggest an answer 0 Answer
0 0
9. How to use mkdir command in Ubuntu?

There are different commands to access the directory in Ubuntu.

suggest an answer 0 Answer
0 0
11. What is Ubuntu and how does it work? Based on Linux, Ubuntu is free to use the desktop operating system. The operating system is primarily intended for personal computers but can be used on the server also. Ubuntu employs GNU Network Object Model Environment, pronounced gah-NOHMor GNOME, which is a graphical user interface and set of applications on the desktop for Linux.
suggest an answer 0 Answer
2 1
12. What is the latest version of Ubuntu?

Ubuntu 18.10or Cosmic Cuttlefish is the latest version of this operating system, released on 18 October 2018. The Ubuntu 19.04, codenamed Disco Dingo, is the upcoming release for the operating system, scheduled for 18thApril 2019 release.

We have to follow these steps to install Ubuntu in PC:

Ubuntu terminal is an interface in which users can type and execute text-based commands. It is used because of faster work completion as compared to graphical applications and menus.

Now let’s discuss a set of most asked all Ubuntu commands related interview questions and suggested answers for them for your acknowledgment. Practicing these interview questions will help you grow your knowledge regarding the Ubuntu operating system and also increases your success chance for future interviews.

Please enter your details to download Ubuntu Commands PDF
Click here to subscribe our email newsletter to receive updates on the interview questions and blogs.
Hey, care to share your feedback?
Visit our blog