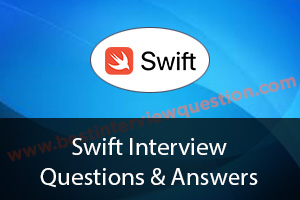 Swift is the latest, open source programming language from Apple, which is very easy to learn. The language is available for developing OS X, iOS, and watchOS apps. Apps built on Swift can be run on devices dating back to iOS 7 or later and OS X 10.9 or later. Swift allows developers to prototype and write apps faster and with fewer bugs than ever before.

1. What are the advantages of Using Swift for iOS Development?

It is fast, safe, modern, and enables a level of interactivity in development. Swift Programming contains a number of features such as closures, generics, and type inference that make it much easier to use.

suggest an answer 0 Answer
7 0
2. What do you mean by a Deinitializer?

When you are trying to perform extra clean-up of your classes, you can define a block called deinit.
Here is the Syntax:
deinit {
//Your cleanup statement here.
}

suggest an answer 0 Answer
5 1
3. How is Swift different from Objective-C?

UI in Swift are connected similar to the way we do in Objective-C. Binding process is the same, only core level has changed. You can select button/label on xib file and bind as is it.

suggest an answer 0 Answer
2 1
5. What is optional chaining?

It is a process of querying and calling various properties. You can chain multiple queries together, but if any link is nil, the entire chain will fail.

suggest an answer 0 Answer
3 1
6. How should errors be handled in Swift?

The way to handle errors in Swift is different from Objective-C. In Swift, you can declare that a function has thrown an error. A function that calls this method must do it from a try block. It is the caller's responsibility to handle the error. This process is quite similar to how we handle errors in Java.

suggest an answer 0 Answer
3 0
7. What is Swift Programming?

Swift is the latest, open source programming language from Apple, which is very easy to learn. The language is available for developing OS X, iOS, and watchOS apps. It allows developers to prototype and write apps faster and with fewer bugs than ever before.

suggest an answer 0 Answer
5 1
8. What is the latest version of Swfit Programming?

suggest an answer 0 Answer
4 1
10. What are functions different from methods?

suggest an answer 0 Answer
1 0
11. What collection types are available in Swift?

suggest an answer 0 Answer
0 0
12. Can you make a property optional?

You can make a property optional by declaring a question mark “?” in the code. If a property does not hold any value, then this symbol “?” can help in avoiding runtime errors.

suggest an answer 0 Answer
1 0
13. How can you write multiple line comment?

suggest an answer 0 Answer
1 0
14. What do you mean by Initialization?

It is the process of creating an instance of class, enumeration or structure. It involves setting an initial value for the existing property and performing initialization before the new instance is available for use. The initialization process can be done by defining initializers.

Open the storyboard file in Xcode and drag in a “Table View” object from the Library. Position it full screen and make sure the edges line up. Now, adjust the height by dragging the edge and creating space at the top. Try running the app in the simulator and you shall see an empty table view.

suggest an answer 0 Answer
0 0
16. What are Floating point numbers? How many types of floating number are there?

Floating point numbers have a fractional component and they represent a greater range of values than integer types.

The classes in Swift are not inherited from the base class. If you define any class without specifying its superclass, it automatically becomes the base class.

suggest an answer 0 Answer
0 0
18. What are lazy stored properties, and how are they useful?

Any property whose initial values are not calculated until the first time it is used is called a lazy stored property. Such properties can be declared by writing the lazy modifier. These properties are useful when the initial value of a property is dependent on external factors whose values are unknown.

These are control flow statements that can be a great addition if you are doing defensive style programming. These statements evaluate a boolean condition and proceed with the execution only if the evaluation is real. Such statements always have an else clause.
guard let courses = student.courses! else {
return
}

suggest an answer 0 Answer
0 0
21. How many Access Levels are present in Swift?

suggest an answer 0 Answer
0 0
22. What are Adapter and Memento Patterns?

Adapter pattern allows the classes with incompatible interfaces to work together. An adapter pattern wraps itself around the object to show a standard interface for interacting with that object.
Memento pattern is used in iOS as a part of state restoration. These patterns are especially used for archiving in Apple.

suggest an answer 0 Answer
0 0
23. What will you do if your App is prone to crashing? First of all, we will determine the iOS version of the device. Next, we need to collect enough information to reproduce the issue and if possible, acquire the device logs. The last step is to create a unit test and start debugging once we understand the nature of the issue.
suggest an answer 0 Answer
1 0
24. What is tuple?

It is a group of values represented as one value, which can be used to return multiple values from a single function call.

Tuple are of two types - Named and Unnamed.

suggest an answer 0 Answer
0 0
26. Why is inheritance not desirable in Swift?

3 reasons inheritance is not good: