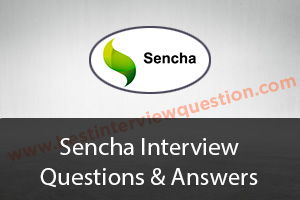 Here in this article, we will be listing frequently asked Sencha Interview Questions and Answers with the belief that they will be helpful for you to gain higher marks. Also, to let you know that this article has been written under the guidance of industry professionals and covered all the current competencies.

The Ext JS or Extended JavaScript is a JavaScript framework which can be used to develop web-based desktop applications with rich UI. However, the Sencha Touch framework is optimized to create web-based mobile applications such as smartphones and pads. This is the prime difference between these two.

It’s a comprehensive Java framework which can be used to build feature-rich web applications. The framework uses the GWT compiler. This allows developers to produce an application in Java and compile them into cross-platform HTML5 code which is highly optimized.

suggest an answer 0 Answer
0 0
3. What are the GUIs supported by Sencha Touch?

The GUIs supported by the Sencha Touch are:

The question is asked in many Sencha Touch Interviews. Go through it twice and don’t miss it the next time you face this interview question.

suggest an answer 0 Answer
0 0
5. Why is Sencha Cmd required?

The Sencha Themer tool helps users to style Ext JS 6 applications with a better user interface. Custom themes can be created with it using graphical tools, without writing any code. App developers will get access to all Ext JS inspection tools and components to set fine-grained styles and generate dynamic stylesheet including theme packages.

suggest an answer 0 Answer
0 0
8. Why is the Sencha Architect tool used for?

This tool empowers app developers to build HTML5 applications merely using drag and drop features. This saves a lot of valuable project time for developers which they use for manual coding. The code available here is also optimized to achieve high-level performance.

suggest an answer 0 Answer
0 0
9. What is the Sencha Inspector tool?

It’s a debugging tool used to get direct access for classes, components and more for applications using the Sencha framework. The Sencha Inspector tool lets developers analyze their code for issues and eventually helps in improving the performance of applications.

The app developers use Sencha MVC to separate the control code, the application data, and view. This separation helps large scale web applications to be flexible and maintain easily.

It’s a complete UI asset kit available for Sketch, Adobe Illustrator and Balsamiq. The package is also available as PNG/SVG so that it can be used with other programs. Stencils contain all of the styles and components used in the Ext JS Classic, ExtReact components and Modern toolkits.

suggest an answer 0 Answer
0 0
12. What is the latest version of Ext JS and how it’s associated with the Sencha Touch?

x-Credit is a virtual form used to meter Support Tickets or request other assistance available under the Sencha support plan. At the time of buying a Sencha support plan, the user will be provided with a certain number of x-Credit balance. The premium support plans of Sencha do not use any x-Credits.

With the use of Sencha Touch, the developers will face the following drawbacks:

The API doesn’t have access to any devices’ contacts, camera and accelerometer sensor.

Users don’t get push notification facility. They have to use long polling or web sockets to avail this.

According to its general public license policy, Sencha Touch is free for all open source applications; however commercial applications will need paid subscriptions.

It’s not appropriate for extreme animation and graphics apps such as gaming applications.

Point to be noted: The question mentioned above has always been a favorite question of Interviewers. This is among the best Sencha Touch Interview Question and Answers for both fresher and experienced as well.

suggest an answer 0 Answer
0 0
15. What if your embedded device has a browser built in?

Distribution of Sencha Touch applications is free of charge through a general-purpose browser, regardless of device. Thus, an embedded license will not be required. The general purpose web browser has a general browser “Chrome” and a URL bar.

The following types of data integration are available with Sencha Touch:

It’s a set of rules to be followed by the identifiers. The Naming convention also makes the code readability easy and understandable for other programmers. Sencha Touch’s Naming convention follows the standard JS convention, which a good practice but not mandatory.

suggest an answer 0 Answer
0 0
18. What are the advantages of using Sencha Touch?

The following are the advantages of using Sencha Touch:

These Sencha Interview Question for both Experienced and Freshers. To know more details about it, get in touch with us.