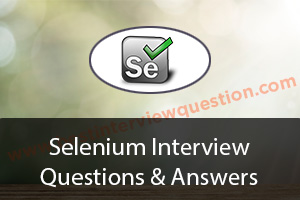 An open-source and free to use automation test tool, Selenium is used to test web applications. Developers use this tool to run test cases directly in web browsers. Selenium supports most of the popular web browsers, including IE, Chrome, Firefox, Safari, and Opera. Developers are free to use programming languages such as Java, Javascript, Python, and PHP to write a test case in Selenium and then running the script to verify test cases in most of the popular web browsers. We have added an interview -specific information to our Selenium Interview Questions. Do not forget to read them!

Developers can run automation test scripts in Windows, Linux an Mac, and can be deployed on Android, iOS and Windows. Selenium is recognized as the most portable, open-source test tool for web application automation. You can now read our updated and huge collection of Selenium Interview Questions.

Here in this article, we will be listing frequently asked Selenium Interview Questions and Answers with the belief that they will be helpful for you to gain higher marks. Also, to let you know that this article has been written under the guidance of industry professionals and covered all the current competencies.

1. What are the advantages of Selenium as a test tool?
suggest an answer 0 Answer
3 0
2. What are the different components in Selenium?

1. Selenium Integrated Development Environment (IDE): It is a record and playback tool, which is distributed as a Firefox Plugin.

2. Selenium Remote Control (RC): It is a server that allows users to create test scripts in the programming language of their choice. It also allows developers to execute test scripts cross browsers.

3. Selenium WebDriver: This tool communicates directly with the browser and uses native compatibility to automate.

4. Selenium Grid: It is used to distribute test execution on multiple platforms and environments

suggest an answer 0 Answer
1 0
3. What are testing types supported by Selenium?

suggest an answer 0 Answer
3 0
4. What is the purpose of Selenium IDE?

It is the easiest and simplest tool in the Selenium Package. Two features - record and playback - make this tool very easy to learn with minimum knowledge of other programming languages. Selenium IDE is the best tool for new users.

It is the language for writing test scripts in Selenium IDE.

suggest an answer 0 Answer
2 0
6. How many types of locators are there in Selenium?

The locator is an address that identifies a web element within the page. Different types of locators are used to identify different web elements accurately in Selenium:

XPath can help the developers locate web elements based on their XML path. The logic behind establishing HTML elements using XPath is the crossing between different parts across the page, which enables a user to find the item through the reference to another aspect.

If you are preparing for Selenium interviews, you can have a look at our Advanced Selenium Interview Questions for better insight.

suggest an answer 0 Answer
1 0
9. How are Selenium IDE, WebDriver and Selenium RC different from each other?

You are expected to know this information during Selenium Interview Questions With Answers.

suggest an answer 0 Answer
0 0
12. Name the different types of waits in WebDriver.

Two types of waits are available in WebDriver - Implicit Wait and Explicit Wait.

Implicit waits provide default waiting time between each consecutive test step across the test script. Therefore, subsequent test steps will execute only when the waiting time has elapsed after the previous test step.

Explicit waits halt the execution till the time a given condition is met or the maximum wait time has elapsed. Unlike Implicit wait, the explicit wait can be applied only in particular instances.

suggest an answer 0 Answer
1 0
13. What are the uses of findElement() and findElements()?

findElement(): This is used to find the first element on the existing web page matching the specified locator value. You must remember that only first matching element will be fetched.

findElements(): This is used to find all of the elements in the existing web page matching the specified locator value. You must remember that all of the matching elements will be fetched and saved in the WebElements list.

No. Selenium is an automation testing tool that only supports web application testing. It cannot handle Windows pop-ups.

This is one of the frequently asked Selenium Interview Questions.

suggest an answer 0 Answer
0 1
16. How are web-based pop-ups handled in Selenium?

suggest an answer 0 Answer
0 0
17. Explain Junit. What are annotations?

It is a unit testing framework, which was introduced by Apache. This framework is based on Java.

suggest an answer 0 Answer
0 0
18. How is TestNG better than Junit?

TestNG is an advanced framework that helps both developers and testers leverage the benefits. An open source framework, it is distributed under the Apache Software License.

Selenium is a collection of different test tools, and therefore different developers played a role in its development. But primarily, Selenium is the brainchild of Jason Huggins who built it in 2004. With a goal to avoid repetitious manual testing of a web application, Huggins created a JavaScript program to control the browser's actions. This program was called JavaScriptTestRunner, which later became Selenium Core. This information can be asked during Basic Selenium Interview Questions.

The latest version of Selenium available is 3.14, which was released in August 2018.

Please enter your details to download Selenium Interview Questions PDF
Click here to subscribe our email newsletter to receive updates on the interview questions and blogs.
Hey, care to share your feedback?
Visit our blog