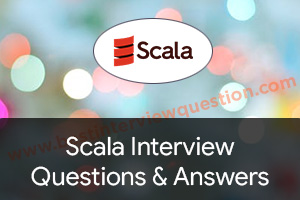 Scalable Language, or Scala, is a general-purpose, hybrid functional programming language. Integrating the features of other technical and object-oriented languages, Scala is designed to run on JVM (Java Virtual Machine). This means Scala will enable you to use all the classes of Java SDK, including custom classes, of your Java open source projects. This information is often asked in Scala interview questions. Being used in most of the enterprise-level web apps, Scala provides lightweight syntax that helps developers define anonymous functions. The language supports high-level functions and allows nesting of those functions. Scala will enable developers to write general programming patterns efficiently by reducing the number of lines. This language also empowers the developers to write immutable codes, thus making it easy to apply parallelism and concurrency.

If you are preparing for the Scala language job interview, we have one of the biggest collection of Scala Interview Questions and Answers.

Here in this article, we will be listing frequently asked Scala Interview Questions and Answers with the belief that they will be helpful for you to gain higher marks. Also, to let you know that this article has been written under the guidance of industry professionals and covered all the current competencies.

1. What is the difference between Java and Scala?
suggest an answer 0 Answer
2 0
2. What do you mean by Option in Scala and why it is used?

Option in Scala is a container that holds zero or one element of a specific type. It represents values that either exist or do not exist. The Option is used to wrap missing values and is a replacement to return null values. This question has the most likelihood of being asked in Scala interview questions for experienced professionals.

suggest an answer 0 Answer
2 0
3. What do you mean by Trait in Scala and when it is used?

A trait in Scala is a unique kind of Class that enables developers to use multiple inheritances. Although a trait can extend to only one class, a class can have many traits. However, unlike classes in Scala, you cannot instantiate traits.

Traits are often used when the user requires dependency injection (DI). In Scala, you do not have annotations or special packages for import. You must initialize the class with trait and dependency gets injected.

suggest an answer 0 Answer
2 0
4. What is tail recursion in Scala?

There are times when programmers have to write functions that are recursive, where the critical problem that such functions eat up the entire allocated stack space. To overcome this challenge, Scala provides a “tail recursion” mechanism.

This mechanism optimizes recursive functions so that they do not create new stack space and use the existing stack space.

Akka is a runtime and toolkit for building concurrent, fault-tolerant and distributed applications on Java Virtual Machine. Though Akka is written in Scala, it contains language bindings for both Scala and Java. Its approach to handling concurrency is built on Actor Model.

suggest an answer 0 Answer
0 0
7. What is the main drawback of Scala language?

Here are some of the limitations of Scala:

REPL in Scala, or Read-Evaluate-Print Loop, is pronounced as ‘ripple.’ It acts as an Interpreter for executing code from the command prompt. This is the reason REPL is called as Scala Command Line Interface (CLI).

The key use of REPL is to develop and test snippets of code for practice purposes. It is useful for Beginner developers to practice low-level programs.

suggest an answer 0 Answer
0 0
9. What is the latest version of Scala?

suggest an answer 0 Answer
5 0
10. What are the advantages of Scala over Java functional programming?

Here are some of the points here Scala scores over other programming languages:

These are key features:

Scala Map is a collection of elements in pairs of key and values, where values can be retrieved using keys. Values are not unique, but the keys are unique. Scala supports two types of maps - mutable and immutable. By default, the language supports the immutable map. You can create a Scala map in two ways – by using comma separated pairs or by rocket operator.

Type Interface is one of the unique features in Scala that help reduce the amount of coding for developers. Type Interface may be defined as the process used by the compiler to determine the type of value, variable, or return value of a function - based on the statement in which they are found.

A bitset is a collection of non-negative integers that are depicted as arrays in Scala. Variable in size, these arrays are packed into 64-bit words. In a bitset, the most significant number determines the memory footprint.

It is a method in Scala that allows the developers to create multi-dimensional arrays. We can prepare you for Scala Interview Questions and Answers by informing you of the latest developments.

Streams are the type of lazy collections, or lazy lists, that get created when starting an element and then generate recursively using the same parts. This feature enhances program performance. Streams are similar to Lists, except that in Streams, the items get added only after being accessed.

A Monad can be described as an object that wraps another object. In Scala, a class object is covered with a monad. Monads wrap objects and offer two operations - Identity through units, and bind through flatMap.

A Monad determines the best way to apply the program to underlying objects. A lot of recent Scala interview questions were based on this information.

There are four types of identifiers:

suggest an answer 0 Answer
0 0
22. What is lambda expression in Scala?

suggest an answer 0 Answer
0 0
23. What are higher-order functions in Scala?

In Scala, Closure is a function in which the return value of a service is based on the amount of variables, which have been declared outside that function.

Currying is a way to transform a role with multiple arguments into a series of different tasks with a single discussion each. This feature helps the developers when they are working with higher-order functions.

A data type in Scala instructs the compiler about kind of value that needs to be stored in a specific location. In Scala, there are no primitive data types because everything in Scala is treated as an object.

Here are the data types:

suggest an answer 0 Answer
0 0
27. Explain Operator and explain types of Operators in Scala?

Operators in Scala are symbols that operate on values. These values are called operands. Operators are essential elements of any programming language, as they allow the developers to perform various types of activities on operands.

This is one of the frequently asked Scala interview questions.

Scala has the following operators:

The foldLeft method in Scala is a member of the TraversableOnce trait. Using this method is essential in a recursive function and helps the developers prevent stack-overflow exceptions. This method also allows the developers to specify an initial value.

suggest an answer 0 Answer
0 0
29. What is the diamond problem in scala?

The problem of Multiple inheritances in Scala is referred to as the diamond problem. This problem occurs when a Class extends more than one Traits of the same method definition. The inability to decide on the best implementation method to choose leads to Diamond Problem. In Scala, the diamond problem gets resolved through the mechanism of Traits and the class linearization rules.

The unique feature that makes Scala standout from the rest is its ability to scale and expand. It has almost eliminated the common problems associated with other popular languages.

Classes and inheritance - two features that stand out in object-oriented programming (OOP) language - are supported in Scala. This enables the development and maintenance of modular software. Some other key features include objects, traits, and case classes.

The unique feature that makes Scala standout from the rest is its ability to scale and expand. Considered as one of the “future-proof” languages, it has almost eliminated the common problems associated with other popular languages. Regardless of the nature of the project you are handling, trust Scala to handle it.

Designed to compensate for the faults of Java, JVM views Scala and Java as same languages.

Martin Odersky started the design process of Scala at the EPFL in Switzerland in 2001. Odersky followed the work dome on Funnel, a programming language that combined ideas from Petri nets and functional programming. After an internal delay, the first version of Scala was publicly released in 2004 on the Java platform.

Please enter your details to download Scala Interview Questions PDF
Click here to subscribe our email newsletter to receive updates on the interview questions and blogs.
Hey, care to share your feedback?
Visit our blog