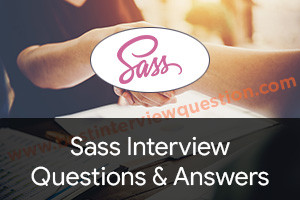 SASS stands for Syntactically Awesome Style Sheets. It is a style sheet language, in other words, it is a scripting language which is compiled into CSS (Cascading Style Sheets).In short, SASS is the CSS pre-processor, and it is a more stable and powerful CSS extension. SASS is an open-source pre-processor which is coded in Ruby. We are mentioning some of the SASS Interview Questions that will give you the detail of the topic.

Natalie Weizenbaum developed SASS, and Hampton Catlin designed it. SASS was developed to reduce the coding time by using only a few codes for ant HTML elements.

SASS was developed in such a way that it is compatible with any CSS because it contains all the features of CSS and secondly the document it provides is in a structured format only.

Get into complete detail and knowledge of SASS through SASS advanced interview questions.

Here in this article, we will be listing frequently asked Sass Interview Questions and Answers with the belief that they will be helpful for you to gain higher marks. Also, to let you know that this article has been written under the guidance of industry professionals and covered all the current competencies.

1. What is Sass? Explain

SASS stands for Syntactically Awesome Style Sheets. SASS is the extension of the CSS which describes the document in a structured format. SASS provides more powerful syntax than CSS.

suggest an answer 0 Answer
7 1
2. Is bootstrap LESS or SASS? Explain

SASS and LESS both are the preprocessor of CSS that enhance the development of CSS but SASS is powerful as compared to LESS. Bootstrap provides a whole framework for creating the user interfaces that include the widgets, the grid layout system, the typographic styling, the Interactive Menu bars and many more. Bootstrap have used many preprocessors in the past for the CSS source code but out of SASS and LESS, Bootstrap uses LESS pre-processor and it has also included various customisations by using the fewer variables and the fewer components.

But Recently BOOTSTRAP 3 has also given the SASS codebase as an alternate option but BOOTSTRAP 4 is being built completely on SASS codebase and this is the first time Bootstrap has using SASS.

SASS (Syntactically Awesome Style Sheets) was developed by Natalie Weizenbaum and it was designed by Hampton Catlin.

SASS (Syntactically Awesome Style Sheets) can be used in the following three ways.

suggest an answer 0 Answer
5 1
6. Explain the features of SASS?

Here are some of the feature of SASS:-

SASS @import directive is used to include one stylesheet inside another stylesheet and in other words, we can say that it imports the .SASS and .scss files.The location of the stylesheet can either be in the same server or it is written with the URL to the directory of another server. For Example:-

Above points clearly prove that the SASS is better CSS pre-processor than the LESS.

SASS has the following Data Types:-

By using @extend function same style can be copied to the other classes also and there is no need to rewrite the code again.

@if directive <and its other companions like @else if, @else allows the code to run only if the conditions are met

The @include derivative is related to mixins that means it includes @mixin code. It allows the coder to create reusable code.

suggest an answer 0 Answer
2 1
19. What is the use of @at-root directive in SASS? Explain

The @at-root directive in SASS was introduced in the Ruby SASS 3.3 in order to emit a style block at the root of the document, In spite of being nested beneath in its parent selectors.

Mixin function helps in making the group of the CSS declarations that need to be used throughout the coding and as result the length of the code reduces.

Please enter your details to download Sass Interview Questions PDF
Click here to subscribe our email newsletter to receive updates on the interview questions and blogs.
Hey, care to share your feedback?
Visit our blog