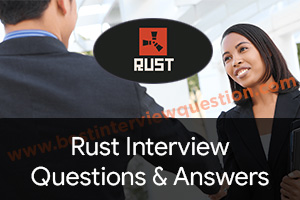 Rust is a system programming language that works beamingly fast, prevents system or the platform from being crashed and eliminate the chances of data races. Rust is a platform that endorses you with both control and safety. In general, Rust Programming Language endorses you with some of the great features like a good control over allocation, the garbage collector is not much required, minimum runtime and close to metal.

Here are some the Rust Interview Questions and Answers for Experienced as well as for those who want to be in that line:

It's beamingly fast system is actually supported by it's compilation to an executable binary, LLVM Optimization Suite, Competitive with C/C++ and LLVM backend. It has undoubtedly a safe & strong abstraction and it guarantees ownership. It also projects great memory management feature that means all the variable have a scope that is valid for. Once it goes out of scope, it gets automatically deallocated. The latest available version is Version 1.31.1

Here in this article, we will be listing frequently asked Rust Programming Language Interview Questions and Answers with the belief that they will be helpful for you to gain higher marks. Also, to let you know that this article has been written under the guidance of industry professionals and covered all the current competencies.

1. What are the advantages of using rust?

It is a choice of developers. To understand advantages, let’s compare Rust with the similar programming language. However, if you want to get into complete details about Rust programming language, we are also mentioning some of the Rust Programming Language Interview Questions and Answers for all. Go through it and feel like you learnt so many things today.

Rust provides safety where C++ is not even capable enough to provide protection to its own abstraction and even the programmers to protect theirs. If any mistake is committed in C++, it shows arbitrary behaviour - technically, it means it has no meaning. Rust isolates you from that part and lets you concentrate you on the problem that you are trying to solve.

Automatic garbage collection provides rust with an edge over Java. Java is faster but even it can’t match with the speed of C in some domains.

Note it: Rust programming language can do it easily.

Good Design gives an edge to Rust over Python. Lambda can’t even hold any statement. In Rust, everything is defined in expressions, which means Language part composes in a much better way.

suggest an answer 0 Answer
4 6
2. How is Rust’s Garbage Collection?

Rust uses a static garbage collector. It works on the principle of automatic memory management which means it automatically recycles the memory that will not be used again.

suggest an answer 0 Answer
1 14
3. How do you get a command line argument in Rust?

suggest an answer 0 Answer
2 3
4. Could you describe some crucial features of Rust?

No, Rust doesn’t guarantee TOC (Tail Call Optimization). Not even the standard library is required to compile the rust code. In these cases, the run time is similar to that of C programming language.

suggest an answer 0 Answer
3 0
6. Does Rust include move constructors?

No, the values of all types in Rust are moved via memcpy. It moves everything that doesn’t have a copy constructor or doesn’t implement the copy trait.

suggest an answer 0 Answer
3 0
7. How to write and run a Rust program?

It's a build system and package manager built for Rust users to manager projects in it. The Cargo system manages three things for users, building code, downloading the libraries, and rebuilding those libraries.

When a user runs cargo build command it automatically creates a file named as Cargo.lock to keep track of dependencies in the user application.

suggest an answer 0 Answer
0 0
10. What string type should you use with Rust?

By far, quite a number of string types are available to be used with Rust, choosing one from these, CStr, str, Slice, CString, OsString, OsStr and Owned type, would be more preferable.

The most vital advantage of using Rust over C languages is its emphasis on producing safe code. As manage memory or pointer arithmetic is necessary in C programs, Rust doesn’t require any of it beginning to end. Rust allows programmers to write unsafe code, but defaulting to its safe code.

We have to use read_to_string() method, which defines the on the Read trait in std::io

suggest an answer 0 Answer
0 1
13. How does a user asynchronous input/output in Rust?

suggest an answer 0 Answer
0 0
14. What’s the relation between Rust and its reusable codes?

Rust allows developers to arrange code in a way that fosters its reuse. By easy organization of modules available in Rust, which contain various structures, function and even other modules which users can use privately or make public according to their

The cargo new command is used to create a new project in Rust. Rust users can use below syntax create a sample project using Cargo.

suggest an answer 0 Answer
0 1
16. How does a user read file input efficiently in Rust?

The following function can be used to read file input efficiency in Rust.

suggest an answer 0 Answer
1 1
17. Explain the rule of using &self, self and &mut self in the declaration method?

&self : when Read-only reference is required to the function.

self : When a value is to be consumed by the function.

&mut : When a value needs to be mutated by the function with consuming it.

suggest an answer 0 Answer
0 0
18. Explain the significance of unwrap() everywhere function in Rust?

This function is used to handle errors that extract the volume inside an option. It’s also extremely useful for instant prototypes with any errors.

We can use gdb or lldb to debug Rust programs as like C and C++ programming.

suggest an answer 0 Answer
0 0
20. What are the Error Handling procedures in Rust?

suggest an answer 0 Answer
0 0
21. Is it possible to write a complete operating system in Rust?

suggest an answer 0 Answer
0 0
22. How to express platform-specific behaviour in Rust?

The following attributes can be used to express platform-specific behaviour in Rust.

suggest an answer 0 Answer
0 0
23. Is it possible to cross-compile in Rust?

Yes, it is possible to have cross-compilation in Rust but certain coding is required to do the cross compilation.

suggest an answer 0 Answer
0 0
24. Explain the significance of deref coercion and its functioning.

Some examples of deref coercion are:

The history of Rust is basically categorized into 4 parts called EPOCHS:

Every 2-3 years, a new version of Rust Programming Language is produced.