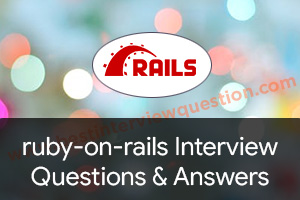 Ruby on Rails is an open-source web development tool that is built on top of Ruby programming language. Designed around productivity and simplicity, this framework gives developers a structure for writing code for building websites and web applications. Ruby on Rails is interpreted like Python, Perl, Tcl/TK, and is object-oriented like Eiffel, Smalltalk, Ada, and Java. If you have read our Ruby On Rails Interview Questions, you can easily find your next dream job.

Here in this article, we will be listing frequently asked Ruby on rails interview questions and Answers with the belief that they will be helpful for you to gain higher marks. Also, to let you know that this article has been written under the guidance of industry professionals and covered all the current competencies.

Ruby on Rails is an open-source web development tool that is built on top of Ruby programming language. Designed around productivity and simplicity, this framework gives developers a structure for writing code for building websites and web applications.

suggest an answer 0 Answer
7 0
2. Who Developed Ruby on Rails?

suggest an answer 0 Answer
2 0
5. What are class libraries?

suggest an answer 0 Answer
4 0
8. What is the difference between false and nil in Ruby?

False indicates a Boolean datatype, and Nil is not a data type and it have an object_id 4.

suggest an answer 0 Answer
1 0
9. What role do sub-directory app/helpers and app/controllers play?

App/controllers: A Controller handles the web request from the user. Rails search the controller sub-directory for controller classes.

App/helpers: This sub-directory holds helper classes that are used to assist the controller classes.

suggest an answer 0 Answer
1 0
10. How are String and Symbol different?

Symbol belongs to the immutable objects category whereas Strings are mutable objects. Both symbol and strings act similarly, but they differ in behavior. The difference lies mainly in the memory object_id and process tune when you use them together.

It is the ORM layer that is supplied with Rails and it follows the ORM model as follows:

Ajax-powered pages retrieve the page from the server. This page is unlike other web pages where you have to refresh the page to see the latest update. Rails trigger Ajax in the following ways:

suggest an answer 0 Answer
1 0
13. What is the process for creating a controller for the subject? What is its role?

Use the following command for creating a controller:

The Rails controller is the center of the application that facilitates the interaction between users, views, and model. It also routes external requests to internal actions and handles URL. It also regulates helper modules and sessions.

Rails Migration enables to make changes to the database, allowing it to use a version control system for synchronizing things with actual code. It can perform the following functions:

suggest an answer 0 Answer
1 0
15. When are self.up and self.down methods used?

self.up is used for migrating to a new version, while self.down is used to roll back changes.

suggest an answer 0 Answer
1 0
16. What is Cross-Site Request Forgery (CSRF)? How is Rails protected against it?

It is a form of attack where a hacker submits a request on your behalf to a website, causing damage or revealing sensitive data. In order to protect from attacks, you must add “protect_from_forgery” to your ApplicationController. This will require a CSRF token to process the request.

suggest an answer 0 Answer
1 0
17. How can you run Rails without creating databases?

You can run your application by uncommenting in environment.rb

suggest an answer 0 Answer
0 0
18. How are Observers and Callbacks different from each other?

Observers are the same as Callback, but they are used when the method is not directly associated with the object. The observer lives longer, and can be detached or attached at any time.

Callbacks are methods that can be called only at certain moments of an object’s lifecycle. Callbacks live shorter.

It is a Ruby Make or a utility that is used for administrative tasks such as migrating the database through scripts and loading schema into the database. In Rails, it substitutes the Unix utility ‘make’ and uses ‘Rakefile’ and ‘.rake files’ to build up task lists.

Redirect is used to issue the error message when the page is not found in the browser. This function tells the browser to issue a new request.

Render is used to make the content and it only works when the controller is being set up with the variables that require rendering.

It is a template that produces JavaScript. This javaScript then runs in an eval block in response to an AJAX request. Sometimes, this template is also used to define JavaScript, Prototype and helpers offered by Rails.

suggest an answer 0 Answer
1 0
24. How is calling super() different from the super call?

A call to super() initiates the parent method without any disputes.

Float is used when the function changes constantly.

Dig is used when you want to show a float in decimal digits.

Max is used when there is a need of Float.

suggest an answer 0 Answer
1 0
26. How many types of variables are available in Ruby Class?

suggest an answer 0 Answer
1 0
27. How are the key differences between Python and Ruby?

David Heinemeier Hansson released Ruby on Rails in 2004. Even today David is working on Rails with a massive group of open-source contributors to make it faster and better. Before you head for your next interview, have a look at these Ruby On Rails Interview Questions.

Latest Version: Latest version is 6.0.0.rc1, which was released in April 24, 2019. Do summarize this information if you are looking for Ruby Programming Language Interview Questions