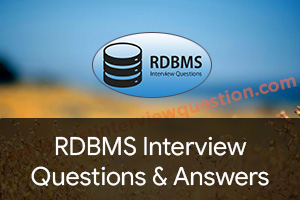 Relational database management system(RDBMS) is the DBMS which was designed for the relational databases. In other words, RDBMS is a subset of DBMS. In RDBMS, the relational database indicates that the data is stored in the structure format using the rows and the columns, i.e., tables and the values in each table are related to each other. RDBMS software executes the queries on the data like adding and updating the data. The application which comes under the RDBMS category is MySQL, Oracle, Informix, IBM DB2 and Microsoft SQL Server. RDBMS Interview Questions we are mentioning below will help you to gain enough knowledge about RDBMS.

All your questions related to RDBMS will be answered in the RDBMS interview questions for freshers mentioned below.

1. How is RDBMS different from DBMS?
suggest an answer 0 Answer
2 0
2. What is RDBMS and also explain its components?

RDBMS stands for the Relational Database Management System.RDBMS is the DBMS in which the data is stored in the tables, i.e., the values are stored in the rows and columns.

The components of RDBMS are:-

suggest an answer 0 Answer
4 1
3. What is the difference between primary and foreign key?

Point to be noted:- Go through this Q&A very thoroughly as this is one of the critical RDBMS interview questions.

An Entity-Relationship model is primarily used to represent the real scenarios as entities. E-R model clearly defines the objects and the relations between the entities

An Object-oriented Model is mainly used to represent the real scenarios as objects. The objects with similar functions are grouped and linked to the other different purposes.in this model, the data can be reused in various missions.

Codd's rules or Codd's law are the set of 12 states which was developed by E.F. Codd in the year 1969-1970. Codd's law tells what is required from the database management system so that it can be considered relational.in other words, Codd's rules are rules for designing the RDBMS.

suggest an answer 0 Answer
1 0
8. What do you mean by super key, primary key, foreign key and candidate key?

This particular RDBMS Question explains the importance of keys in the database.

suggest an answer 0 Answer
1 0
9. Explain the difference between physical and logical data independence?

suggest an answer 1 Answer
1 1
10. What do you mean by cardinality and its types?

In the context of data models, cardinality means the relationship between two tables.

The connection can be of 4 types

In the context of Query Optimization, Cardinality refers to the uniqueness of the column in the table. A column having unique value will have high cardinality and vice-versa.

Some of the most popular RDBMS software are SQL Server, Oracle, PostgreSQL, SQLite, ThinkSQL, Cubrid.