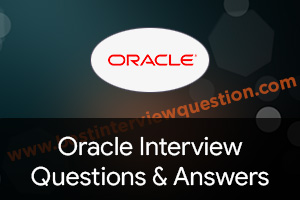 ORACLE is primarily a relational database management system. Oracle is also known as Oracle DB or Oracle RDMS. By using Oracle, the user can directly access the objects through the Structured Query Language(SQL).

Oracle is designed to support multiple data models. The best part about Oracle is that it has its network component which allows the communications across the networks. Oracle runs on Windows, UNIX, Linux, and Mac OS. Oracle is written in Assembly language, C & C++.in today's world Oracle database is considered as one of the most reliable database engines in the world. Oracle interview questions we are mentioning below will help you to gain enough of the knowledge about Oracle.

Here in this article, we will be listing frequently asked Oracle Interview Questions and Answers with the belief that they will be helpful for you to gain higher marks. Also, to let you know that this article has been written under the guidance of industry professionals and covered all the current competencies.

Because of the following reasons Oracle is the most used database software.

suggest an answer 0 Answer
0 0
3. What is Oracle latest version?

The latest version of Oracle Database is 18c. This version got released on 16th February 2018.

suggest an answer 0 Answer
0 0
5. Explain the features of Oracle?

Here are some of the features of the ORACLE:-

PL/SQL is the language which is used to write the codes in the database.

For Example - PL/SQL is used to write the ORACLE database.PL/SQL is basically to combine the SQL and the procedural feature of the programming language. This language was developed to enhance the characteristics of the SQL language.

Some of the features of the PL/SQL are:-

An INSERT statement is used in the ORACLE database to insert the single record or the multiple records in a table.

This particular ORACLE interview question explains the importance of keys in the database.

suggest an answer 0 Answer
0 0
11. Write a syntax for update query in Oracle?

An UPDATE statement is used to update the records that already exist in the table.

ORACLE 12c created the change in the architecture of the ORACLE database. In this version came with the concept of the Container Database (CDB) and the Pluggable Database (PDB)

This is the favorite interviewer question in Oracle interview questions for experienced.

The trigger is the procedure which is implicitly executed by the Oracle server when the INSERT, UPDATE, DELETE statement is executed against the associated table in the Oracle database.

Based on the event these are the types of trigger:-

The compound trigger was in introduced in Oracle 11g. This single trigger on a table enables the user to specify the actions for each of the four timing points:

In other words, Compound trigger merges all the four triggering events into the single piece of code, and as a result, the performance of the database server is improved during the bulk operations. The Compound trigger is only for the DML triggers.

suggest an answer 0 Answer
0 0
25. What are the various constraints used in Oracle?

Once the table is created, then the user can add any value in the table, but the values have to be validated. In this case, the constraints act as a validator which checks the data validity.

There are five types of constraints:-

Drop constraint is used for removing the constraints from the table.

When the data required by the user is in more than one table, then Join comes into the picture. Oracle Join is used to combine the rows from more than one tables. Join also retrieves data from multiple tables and creates a new table.

suggest an answer 0 Answer
0 0
31. Explain self joins in oracle?

Here, the standard JOIN command is used in which both the tables in the join are the same tables.

All your questions related to Oracle will be answered in the Oracle interview questions for freshers mentioned below.

Oracle was developed by Lawrence Ellison and his co-workers Bob Miner and Ed Oates in the year 1977. The first version ORACLEv2 was released in the year 1979 which was the first available SQL based RDBMS.

Oracle Database 18c is the newest version which got released on 16th February 2018.

Please enter your details to download Oracle Interview Questions PDF
Click here to subscribe our email newsletter to receive updates on the interview questions and blogs.
Hey, care to share your feedback?
Visit our blog