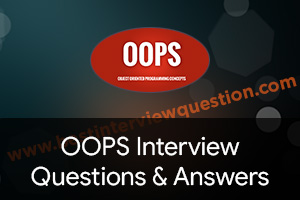 OOPS Stands for Object-Oriented Programming System. It refers to the languages which are using objects in programming. The objective of OOPS is to carry out practical entities such as hiding, abstraction, polymorphism, and more into coding.

While implementing these entities, OOPS aims to increase the efficiency of code by binding the data and its functions needed for operation in such a way that accessibility to data remains limited to the functions which need them, thus, keeping your code extremely organized.

Here in this article, we will be listing frequently asked OOPS interview questions and Answers with the belief that they will be helpful for you to gain higher marks. Also, to let you know that this article has been written under the guidance of industry professionals and covered all the current competencies.

OOPS stands for Object Oriented Programming system. It is a programming technique which is used to design your application. In this programs are considered as a collection of objects and each object is an instance of a class.

Class is a user-defined datatype that contains variables, properties, and methods. It defines properties of an Object

An object is an instance of a class. It has its own behavior and identity.

suggest an answer 0 Answer
5 3
5. What is Encapsulation?

It is an attribute of an object, and it contains all data which is hidden. That hidden data is restricted to the members of that class.

suggest an answer 0 Answer
8 4
6. What is Polymorphism?

It takes more than one form. It is nothing but assigning behavior or value in a subclass to something that was already declared in the main class.

suggest an answer 0 Answer
3 3
7. What is Inheritance?

It is a technique in which one class acquires the property of another class. With the help of inheritance, we can reuse the fields and methods of the existing class.

Inheritance has three type, are given below.

But PHP supports only single inheritance, where only one class can be derived from single parent class. We can also use multiple inheritance by using interfaces.

suggest an answer 0 Answer
5 0
8. What is constructor and destructor?

Constructor and Destructor both are special functions which are automatically called when an object is created and destroyed.

suggest an answer 0 Answer
2 2
9. What is different types of Visibility?

PHP have three access modifiers such as public, private and protected.

suggest an answer 2 Answer
5 0
10. What is final class and final method?

It's properties can not be declared final, only classes and methods may be declared as final. If the class or method defined as final then it cannot be extended.

suggest an answer 0 Answer
2 2
11. What is static keyword ? When a variable or function declared as static then it cannot be accessed with an instantiated class object. It is treats as public if no visibility is defined. It can also be used to define static variables and for late static bindings.
suggest an answer 0 Answer
1 1
12. What are the difference between overloading and overriding in oops?

Overloading : It occurs when two or more methods in one class have the same method name but different parameters.

Overriding : It means having two methods with the same method name and parameters. One of the methods is in the parent class and the other is in the child class.

It refers to the current object of a class.

suggest an answer 0 Answer
3 0
14. What are the difference between abstract class and interface in OOPS?

Thera are many differences between abstract class and interface in php.

1. Abstract methods can declare with public, private and protected. But in case of Interface methods declared with public.

2. Abstract classes can have constants, members, method stubs and defined methods, but interfaces can only have constants and methods stubs.

It allows us to use the same function or class name in different parts of the same program without causing a name collision.

Magic methods are special names, starts with two underscores, which denote methods which will be triggered in response to particular PHP events.

The magic methods available in PHP are given below:-

Member variables defined inside a class. Data of member variables will be invisible to the outside of the class and can be accessed via member functions. These variables are called attribute of the object once an object is created.

Member function defined inside a class and are used to access object data.

My name is Umesh Singh having 7+ experience in Node.JS, React JS, PHP, Laravel, WordPress, MySQL, JavaScript, HTML and CSS etc. I have worked on around 20+ projects. I love programming, coding and most of my time goes in learning the best ways to write clean code. When I am not found coding, I can be seen helping out tech geeks. I am always open to help you.