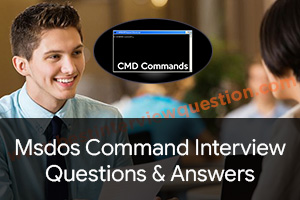 MS-DOS (Microsoft Disk Operating System) is 86 DOS-derived non-graphical command lie operating system specially created for IBM compatible computers. Although the use of MS-DOS is not more used, its command shell or commonly known as Windows command line is still in use largely due to their convenient user acceptance as it allows the users to navigate, manipulate and open files on their computer systems from a quick command line instead of GUI like windows. Even though MS-DOS commands are not a specific niche for interviewers, DOS commands with examples are standard interview questions to be asked for almost every interview associated with IT sectors. We will discuss a set of MS-DOS commands further here for your acknowledgment, ensuring success for your upcoming interview.

Here in this article, we will be listing frequently asked MS-DOS Commands and Answers with the belief that they will be helpful for you to gain higher marks. Also, to let you know that this article has been written under the guidance of industry professionals and covered all the current competencies.

Abbreviation of Microsoft Disk Operating System, MS-DOS is used by computer users for non-graphical command line operating system, which is derived from 86-DOS and created for IBM compatible computers. It performs the crucial housekeeping functions on disk, which includes organizing, moving, copying, locating, storing and retrieving information that resides in the disk.

CD or Change Directory is a syntax or command line used t change the working directory in an MS-DOS operating system. The command line or chdir can be used for both batch file and shell scripts. It is an internal command.

In MS-DOS, the booting is process including a number of steps that a DOS system that includes performance whenever it is rebooted or turned on with the rest of the options available. The initiation of booting always starts with the special program software that is present in the system BIOS ROM.

We have to follow these steps to change drive in DOS using the command prompt.

There are plenty of DOS commands available to be used according to their preference. Here is the list of most used ones:

Here are a list most used external commands of DOS:

suggest an answer 0 Answer
0 0
13. What is an external DOS command?

The external DOS command is not included in the command.con and requires large requirements and not commonly used.

It’s a character based text editor present on MS-DOS and can be used as a substitute for Notepad. It can edit file up to 65,279 lines and up to approximately 5 MB in size.

To create a directory in DOS, we have to follow these steps:

suggest an answer 0 Answer
0 0
17. How do I change directories in DOS?

To change directory in DOS, we have to follow these steps:

To delete a file using the DOS command, we have to follow these steps:

suggest an answer 0 Answer
2 0
20. What is the DOS command to copy a directory?

We have to use the copy command to perform this task. It’s an internal command which can be used to duplicate one or more files at the same time to the same location with a different name or to other place with the same name or used the preferred name.

Written by Tim Paterson and introduced by Microsoft in August of 1981, MS-DOS was last updated in 1994 to its version 6.22. Here are a few advantages of using MS-DOS commands