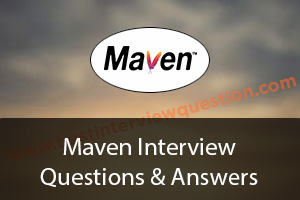 Maven is a powerful software project management tool used for managing projects developed in programming languages such as Java, Ruby, and C#. We can produce documents, SCM, distribute and report the documentation along with the management of dependencies. The tool also compiles projects within the IDEs. If you are looking for other best Maven Interview Questions, then you find them here. This software project management tool was created in the year 2002 by Jason Va Zyl. It was a part of Apache Turbine project and converted to Apache Software Foundation in the year 2003.

Here in this article, we will be listing frequently asked Maven Interview Questions and Answers with the belief that they will be helpful for you to gain higher marks. Also, to let you know that this article has been written under the guidance of industry professionals and covered all the current competencies.

1. What do you mean by Maven and why it is used?

A maven is a tool used for software project management and comprehension. Most of the times it is used with projects or software developed in Java, and other programming languages such as Ruby and C#.

This software project management tool is used for-

POM, Project Object Model is the fundamental work unit in Maven. Basically, it is an XML file containing details of the configuration and project information with the help of Maven for building the project. The best thing is the availability of the default values for the projects.

Maven install is used for framing a project configuration-based dependency tree such as pom.xml. On an mvn install, framing project is done on all the subjects under downloads/compiles and super pom.xml for all the required components in the directory

suggest an answer 0 Answer
0 0
6. What is the use of Maven repository?

It is the directory of the JAR files which are packaged and that too with some metadata which are POM files. These are the files used for downloading dependencies of your dependencies till the time when all of them are downloaded. These are put into the local machine.

suggest an answer 0 Answer
0 0
7. What are the types of Maven repository?

There are three types of Maven repository, namely-

suggest an answer 0 Answer
0 0
10. What is Maven's order of inheritance?

It is one of the most common Maven Interview Question and most accessible to answer and remember.

The order of Maven inheritance is as below-

suggest an answer 0 Answer
0 0
11. How do you check if you have Maven installed?

Follow the below-written steps to check the proper installation of Maven:-

Learn more about Best Maven Interview Questions with us.

In Maven, snapshots are used for active projects. You can entirely rely on the snapshot release when you have software development projects are active. Here, Maven attempt to download the snapshots, when the user runs the build, from a repository.

The latest version of Maven is v3.0

Please enter your details to download Maven Interview Questions PDF
Click here to subscribe our email newsletter to receive updates on the interview questions and blogs.
Hey, care to share your feedback?
Visit our blog