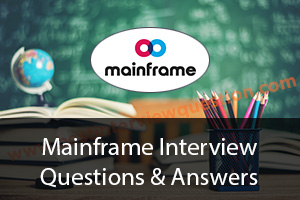 Mainframe testing is somewhat similar to web-based testing. It is actually defined and designed for mainframe system testing. It has a major role in application development. It comes into action to test the test case which is developed. To get into complete the complete details about the mainframe interview questions we are mentioning Questions and Answers that can be a help to you. Mainframe testing action usually takes place over the code which has already been deployed. Various sets of data combinations are used in the input file. A terminal emulator is usually used to access the applications running on the mainframe. The only thing that is required in the client’s system is Emulator installed in it. The tester must be aware of the CICS screen navigation while starting Mainframe testing.

You will get to about the complete details of Mainframe Testing in Mainframe interview questions that we are mentioning below.

1. What is the difference between HDAM and HIDAM databases?
suggest an answer 0 Answer
2 0
2. What is meant by referential integrity?

Referential integrity is a rule that states that there needs to be followed between the primary and foreign keys. This means that every foreign key needs to have a specific primary entry key

suggest an answer 0 Answer
1 0
3. List the type of locks and explain each of them.

There are primarily three types of locks:

suggest an answer 0 Answer
1 0
4. What is INSPECT and what is it used for?

INSPECT is termed as a COBOL verb and it is used to discover the number of times a certain string shows up to supplant a certain segment of an information thing.

suggest an answer 0 Answer
1 0
5. What is NEXT SENTENCE and CONTINUE unique?

DRDA means Distributed Relational Database Architecture, It is essentially a protocol for connection for relational database processing which many vendor databases and the IBM database use.

This is one of the most important mainframe developer interview questions.

The LIKE table can be created It can be made by the use of the LIKE parameter in the statement CREATE. These tables are generally required for testing the production environment.

suggest an answer 0 Answer
1 0
9. In a test environment, is there a need to run a runstats?

It is required to run a runstats because you have to clear the default values from the catalog columns. The existence of a default value in a column may result in an unexpected answer

There are mainly three types of tablespaces

suggest an answer 0 Answer
0 0
12. Explain the meaning of SPUFI

SPUFI stands for SQL Processing Using File Input. It is basically a tool driven by menus that the developers use to create objects in the database

An alias is an alternative or a substitute to a synonym. They are created especially for distributed environments so that the developers can avoid using location qualifiers for tables or views.

The VSDM KSDS is placed at the BSDS. This question acts as a mainframe support interview question

suggest an answer 0 Answer
0 0
15. What is meant by an isolation level?

There are four file OPEN modes, they are:

Yes, the order of the WHEN clause is significant in an EVALUATE statement. It has to take place from the top to the bottom and thereby, the order of the values has an effect on the results and may impact the outcome

suggest an answer 0 Answer
0 0
18. Are scope terminators compulsory? If they are, when?

Scope terminators are mandatory for EVALUATE statements and in-line PERFORMS. These are always declared with complete transparency to improve its readability

suggest an answer 0 Answer
0 0
19. What do you mean by linkage section?

The linkage is a part of a program that maps to the specific data in the program's working storage.

A linkage section is an area where any shared data item is defined and declared.

suggest an answer 0 Answer
0 0
20. Explain how you can characterize tables in COBOL

The happens condition is used to characterize exhibits or tables in COBOL. The components of the table can be eluded by using INDEX or SUBSCRIPT

suggest an answer 0 Answer
0 0
21. What is the usage of COMP fields in COBOL?

suggest an answer 0 Answer
0 0
22. In which area will you utilize 88 level items in COBOL?

88 level items indicate restrictive factors and it helps in making choices for specific conditions in a program. You can use SET to increase the incentive for 88 level elements

suggest an answer 0 Answer
0 0
23. Is it possible to move an alphanumeric incentive to a numeric field?

Yes, it is possible to move an alphanumeric incentive to a numeric field with a MOVE statement.

Yes, it is possible. If the field is used as part of the computation, you may face an information case problem (S0C7). This data provides a solution to COBOL queries with information development of many factors

suggest an answer 0 Answer
0 0
27. Can Min or Max be used with alphanumeric data?

Yes, you can use MIN or MAX with alphanumeric information

A deadlock is a situation when an independent process is contended for a reserved or the same resource of one another. -911 and -913 are the SQL codes for a deadlock.

A bolt dispute is said to happen when an excess of one protest asks for consent for its execution simultaneously. The DBD passage only allows one question at a time

A linkage segment is a part of a program that maps to information things in the working stockpile of the program.