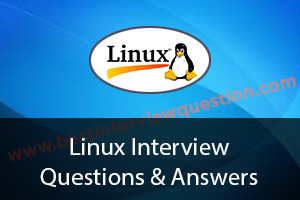 A genuinely free and open source operating system, Linux is one of the most liked operating systems. It was designed keeping in mind the Unix compatibility. Read our detailed Linux interview questions to know more about the features and commands of Linux. Usually, it is called as the clone of Unix. Linux was developed by Linus Torvalds. While working on the Unix OS, he felt the need to improve Unix, but the designers of Unix rejected his suggestions. Hence, he founded the Linux in 1991 as a kernel first, which was later launched as a full-fledged OS.

Here in this article, we will be listing frequently asked Linux Interview Questions and Answers with the belief that they will be helpful for you to gain higher marks. Also, to let you know that this article has been written under the guidance of industry professionals and covered all the current competencies.

1. How to stop a process running in Linux?

You can kill the process using –

An open-source operating system, Linux is currently one of the best OSs. It can be considered as software that sits underneath and communicates with the other software on a computer and passes on requests from those software programs to the hardware.

Linux is used because it is –

If a Linux server runs out of memory, the kernel moves some inactive processes from Linux server to a disk that acts as the virtual memory. This disk space is called a Swap.

suggest an answer 0 Answer
0 1
5. What are the essential features of the Linux operating system?

Read details about the security features of Linux in the next question of our Linux Interview questions list.

suggest an answer 0 Answer
0 0
6. How is Linux more secure compared to other operating systems?

There are multiple reasons for this –

suggest an answer 0 Answer
0 0
7. What is the structure of Linux?

Linux has a layered structure –

suggest an answer 0 Answer
0 0
10. What is the virtual desktop in Linux?

You can use the key combination Ctrl+Alt+T to open a command prompt in Linux.

It is an environment variable that contains a list of paths that are used to resolve the library dependencies at run-time (dynamic libraries). This path is checked before the standard paths /lib or /usr/lib.

Graphical User Interface or GUI makes it easier for a Linux user to execute programs via a desktop, similar to Windows. The desktops in Linux are KDE, Java, GNOME.

Puppet is a Configuration Management tool. It is used to

suggest an answer 0 Answer
0 0
19. How to enhance the security of password file in Linux?

For enhanced security, a shadow copy of the password file is made, which stores hashed passwords of all the users. The hashed password is a long string of characters, generated based on the hashing method used.

Read further for more questions on security in our list of Linux interview questions.

A program that gets executed in the background because of the occurrence of a specific event, process or condition. Daemon processes are managed by the Kernel. The operations are given unique PIDs.

Use chmod 777 to give full permission to reading, write and execute.

suggest an answer 0 Answer
0 0
27. How to Uninstall Software with the Command Line in Linux?

Use the command apt-get as –

There are 80 system calls in Unix that are used to control processes, manage filesystem and for inter-process communication. System calls occur in the kernel.

suggest an answer 0 Answer
0 0
29. Which command in Linux is used for the description of any command?

For this access the individual command’s manual page. For instance, to know the description of

This will display a description of the said command.

suggest an answer 0 Answer
0 0
30. How many types of bond are there in Linux?

There are 3 main components in Linux

Check out all the Linux interview questions to understand how Linux is a more improved version of Unix.

Please enter your details to download Linux Interview Questions PDF
Click here to subscribe our email newsletter to receive updates on the interview questions and blogs.
Hey, care to share your feedback?
Visit our blog