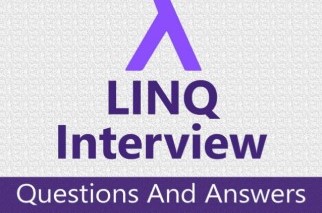 LINQ is an abbreviated form of Language -integrated Quer. It is an innovation that is used to bridge the gap between two platforms, namely Visual Studio 2008 and the .NET framework. There is a number of LINQ queries that are used to retrieve data from the data sources. In this, blog, we are providing a collection of LINQ interview questions that will help you in cracking interviews. Traditionally, the queries against data can be expressed in the form of simple strings without supporting IntelliSense. Likewise, users can use the coding patterns for the purpose of transforming data in XML documents, ADO.NET datasets, .NET collections, SQL databases and another format for which LINQ provider is available. We are providing a vast collection of LINQ interview questions, which will help you in achieving success factors.

Here in this article, we will be listing frequently asked LINQ Interview Questions and Answers with the belief that they will be helpful for you to gain higher marks. Also, to let you know that this article has been written under the guidance of industry professionals and covered all the current competencies.

suggest an answer 0 Answer
9 2
2. What is the best way for retrieving single record in LINQ?

Use the First() or FirstOrDefault() command to retrieve single row records in LINQ.

suggest an answer 0 Answer
8 1
3. What is the difference between Linq and lambda expression?

Following are the difference between LINQ expression and LAMBDA expression

LINQ is of five types namely-

suggest an answer 0 Answer
7 1
6. What is Query and Sequence operators in LINQ?

The query is an expression which is used to recover data from a variety of data sources and query can be expressed in specialized languages.

Three types of actions can be performed on LINQ query namely

Action in LINQ is a delegate type that is used to declare delegate variables without any need to define a custom type. The Action types that represent delegate without return value are the Action types in the System namespace

suggest an answer 0 Answer
4 0
8. How LINQ is beneficial than stored procedures?

LINQ is beneficial than stored procedure due to-

In LINQ, an Expression tree is nothing but expressions systematically organized in a tree-like data structure. Here, each node in an expression tree relates to expression. This is just like an in-memory representation of a lambda expression in which only the actual elements of the query are held and not the result of the query.

suggest an answer 0 Answer
2 0
11. What are compiled queries in LINQ?

A compiled query in LINQ is actually a cached version of the original query which is used to get similar results. After writing the query, for the first time it is parsed for any errors in LINQ and then converted into its SQL version and finally added as cache.

suggest an answer 0 Answer
1 0
12. What is PLINQ and how it is different from LINQ?

PLINQ stands for Parallel LINQ which is a query execution engine that drives and manages their operations on the top of the managed environment of .NET.

LINQ is an abbreviated form of Language Integrated Query, which is a part of the language used to used provide seamless and consistent access to a number of data sources such as XML and databases. LINQ is categorized into three varieties namely LINQ (C#), LINQ providers (LINQ to SQL, LINQ to XML and LINQ to Objects), and data sources (collections, SQL and XML)

LINQ is used to make the code readable and compact and it is used to query different types of data sources. likewise, it is familiar language, required less coding, readable code, compile-time safety, IntelliSense support and shaping up of data support.

suggest an answer 0 Answer
5 0
14. What is the difference between SQL and LINQ?

Following is the difference between SQL and LINQ queries-

1. SQL- The main return type of local variable that holds query in SQL is IQueryable. Moreover, it is a Structured Query Language used for the manipulation of data.

2. LINQ- The main return type of local variable that holds query in LINQ is IEnumerable. Moreover, it translates the query into equivalent SQL queries and sends them for processing to the server.

suggest an answer 0 Answer
4 0
15. What is the difference between the Take and Skip clause in LINQ?

Following are the difference between TAKE and SKIP clause

1. Take clause- Take clause in LINQ is used to return a specific number of elements.

2. Skip clause- Skip clause is used to skip the specified number of elements in the query and return rest all of the present elements.

In LINQ, a Deferred Execution basically means that there is a delay in the evaluation of an expression and shall be realized only when the user needs it.

Entity classes are the fundamental building blocks of systems developed on LINQ. In this, the entity classes, which are basically an object wrapper for any database table, have a stereotype of the entity.

suggest an answer 0 Answer
1 0
21. What are Quantifier Operations in LINQ?

Quantifier operations in LINQ are those which return a Boolean value, i.e. True or False on execution.

Here are the type of Quantifier Operations in LINQ:

The LINQ interview questions that most probably asked during the interview are providing in this blog that will help you in order to achieve the desired goals.

Please enter your details to download LINQ Interview Questions PDF
Click here to subscribe our email newsletter to receive updates on the interview questions and blogs.
Hey, care to share your feedback?
Visit our blog