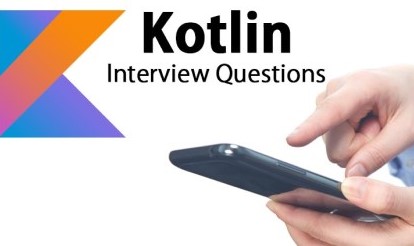 If you are about to attend the Kotlin interview it is highly recommended that you go through the advanced Kotlin interview questions for your reference. Kotlin is one of the latest JVM programming languages and Google has also declared it is the official language for Android development aligned with Java. It is also suitable for developing server-side applications through which a developer can build and execute expressive coding. Kotlin also supports Android application development functioning hence there is a wide range of scope learning the same. If you are looking for a parcel of opportunities from all across the organization then polish your skills and consider the resources.

Kotlin supports multiple programming paradigms, such as internal, object-oriented, and functional programming. Our collection of Kotlin Interview Questions shall help you to understand the basics of this language.

1. What do you understand by Kotlin, explain its working?

Kotlin is an open-source programming language that entirely runs over the virtual machine for its proceeding. This language executes utilizing the Java platform and it was developed by JetBrains. This language is quite simpler than most of its variants specially Java.

All of its codes are converted into native quotes that are processed by the byte code conversion where it refers to the object-oriented programming language.

suggest an answer 0 Answer
4 0
2. Why Kotlin is better than Java? As Kotlin is an open-source programming language it significantly refers to a general language serving all the purposes. It also offers code redundancy in which most of the features are included which are not available in Java. It is also a perfect combination of features like null safety, primary constructors, extension functions, properties, inline expressions, lambda expressions and various other types of interference are included in it. Kotlin also serves for all the major properties and its variables.
suggest an answer 0 Answer
2 0
3. What do you understand by structural expressions?

Structural expressions refer to the representative form of the loops in Kotlin. There are three important expressions which are:

If you are looking for a decent set of questions then you can categorize it under the best Kotlin interview questions for experienced professionals.

suggest an answer 0 Answer
2 0
4. Please elaborate on the modifiers in Kotlin?

Developers which are used to personalize declarations are known as modifiers and there are four types of modifiers available in Kotlin.
These modifiers are

suggest an answer 0 Answer
2 0
5. Can you mention some of the extension methods used in Kotlin?

Some of the significant extension methods used in Kotlin are-

suggest an answer 0 Answer
2 0
6. What do you understand by data class in Kotlin?

The classes which are used to hold the data or content are known as data classes. Earlier these data classes were only used to build the codes in Java but following the explicit implementation of its higher and greater set of properties, it is significant in kotlin as well. Along with this language, functions like tostring, equals are also combined with it. Kotlin offers a variety of these functions by implementing them along with the component functions.

suggest an answer 0 Answer
2 0
7. Mention the type of strings present in Kotlin?

Basically, strings refer to a collection of various characters altogether. There are two types of strings present in Kotlin which are-

Under these strings, templates can also be evaluated easily and this evaluation is known by term as string template interpolation.

suggest an answer 0 Answer
2 0
8. List down the basic data types in Kotlin?

Data types are the instances of consonants or variables tending to decide the type of variable. It also specifies the space required for the storage of these variables.

The data types are-

Note: This is one of the significant kotlin interview questions asked in most interviews.

suggest an answer 0 Answer
2 0
9. What are constructors, explain its types?

There are two types of constructors in Kotlin which are-

kotlin android interview questions have always helped the experience’s to build their career in Kotlin's development and functioning. The references are incredibly marked for students to grow their careers exponentially with reputed organizations. Kotlin is preferred as a general-purpose programming language which is also a cross-platform service having type interference. Using Kotlin is convenient and safe to use and code also it is interoperable. Due to its utility, most of the organizations are actively hiring Kotlin professionals. This article actively contains Android kotlin Interview Questions who are willing to build their career in Kotlin.