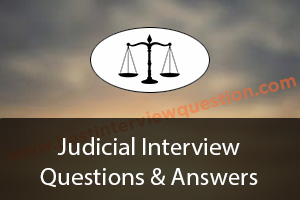 Here in this article, we will be listing frequently asked Judicial Interview Questions and Answers with the belief that they will be helpful for you to gain higher marks. Also, to let you know that this article has been written under the guidance of industry professionals and covered all the current competencies.

1. What are qisas and diyat?

It is one of the punishment forms in traditional Islamic criminal jurisprudence. It is available to the victim or the heir of the victim against the one who has committed any injury or any murder.

Under the Islamic Law, it is money-related composition which the victim or its heir gets when subjected to any property damage, any bodily harm or murder. It is the opposite of the punishment covered under Qisas.

suggest an answer 0 Answer
1 0
2. What is the central role of the judicial branch?

Out of three branches of the federal offices, the judicial branch involves civil as well as criminal courts. The primary role is the interpretation of the Constitution and then limiting the power of the other departments.

suggest an answer 0 Answer
2 0
3. What is meant by the First Information Report(FIR)?

It falls under Section 151 of the Code of Criminal Procedure. A police officer many arrests the suspect in case of any cognizable offense without any warrant or orders from Magistrate. It is one of the frequently asked Judicial Interview Questions and Answers.

suggest an answer 0 Answer
2 0
5. What are the inherent powers of the High Court?

These are the powers which empower the court in doing complete justice between the parties. The inherent powers cannot be taken away from the courts. Some of the intrinsic power of the court is peculiar in criminal jurisprudence. It is the power which removes the province of criminal law jurisdiction from the malicious influences and moral corruption. The context of the issue is the limitation of power, scope, and the extent.

suggest an answer 0 Answer
0 0
6. Can FIR be quashed after charge sheet?

Under Section 482, an FIR can be quashed, no matter if there is a charge sheet or not. There is a prevention of the abuse of the miscarriage of justice or the process of the court.

suggest an answer 0 Answer
1 0
7. What is a summary trial in magistrate court?

In the summary trial in a Magistrate court, the main focus is on trying and disposing the case at once. The complicated and complex cases which require more time and inquiry process are beyond the area of such summary trials

suggest an answer 0 Answer
0 0
8. What is hearing before charge?

It is also known as preliminary hearing in criminal law which get to know if the person has been charged with any serious crime that is punishable in the state prison and then if he is charged for the crime and if there were any shreds of evidence for the same.

CPC Act is Civil Procedure Code Act is there to amend and integrate the laws as per the procedure of the Courts of Civil Judicature. Memorizing these sections and acts can help get good marks in Judicial Interview Question and Answer.

suggest an answer 0 Answer
0 0
10. Which are the directive principles of state policy?

DPSP or the directive principles of state policy are the rules and the guidelines which are required for framing of the laws used by the government. Part III constitutes these rights of the Constitution. These rights are applied irrespective of the place of birth, race, creed, gender, religion, etc. The courts enforce these rights, and they are subject to the specific limitations.

Duties of an agent include-

suggest an answer 0 Answer
0 0
13. What is the discharge of a contract?

When the primary obligations of a contract come to an end, then it occurs. With the end of this contract, there also comes the end of the contractual relationship. These are the prime obligations which are to be fulfilled; otherwise the parties may need to terminate the contract.

This Judicial Interview Question and Answer can assist you in making a good impression over the interviewer.

FIR is the report lodged in the written form by the Police after receiving any information about the offense.

The complaint is filed by Police when the victim himself lodges it or if anyone from his behalf lodges it.

Under this section of CrPC, the court can quash any criminal proceedings which might not have the proper details of the inherent powers of the court.

Please enter your details to download Judicial Interview Questions PDF
Click here to subscribe our email newsletter to receive updates on the interview questions and blogs.
Hey, care to share your feedback?
Visit our blog