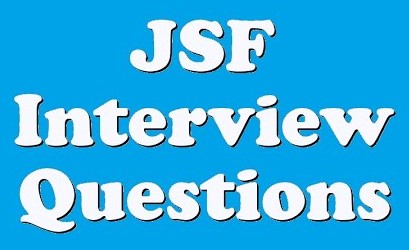 JSF is known as Java Server Faces, and it is an MVC web-based framework. It mainly simplifies User Interface (UI) construction for server-based applications. The UI components are reusable in a page in JSF. It provides a set of standard UI components and gives an Application Programming Interface (API) for the developing elements. All the popular JSF interview questions and answers have been put together which will be handy if you want to crack an interview.

These top JSF Interview Questions will be helpful in clearing job interviews and getting a promotion at work.

1. How can you call multiple listeners in JSF?

When there is a need to attach multiple listeners, a JSF tag for value change listeners and the action listeners are used to attach more than one listener to the element. When you make use of the tag syntax, you specify the class which implements the listener interface.

suggest an answer 0 Answer
0 1
2. What are facelet JSF tags?

JSF provides special tags in order to create a standard layout of a web application called Facelets tags. These tags provide a flexible approach to manage common parts of the multiple pages in one place. You need to make use of the following namespaces in the URL HTML mode: Xmls- “http://www.w3.org/1999/xhtml.”

The Render kit refers to the collection of a renderer which renders the Java faces. These are kits specialized for some clients to perform specific purposes. A typical Java server renders more than one renderkit instances applications.

JSF provides a standard HTML tag library. These tags are rendered into the corresponding HTML tag.

The method expression allows the users to involve a public method of the bean which returns the result that is important for validation of the data component and for handling the events.

The full form of JSF is Java Server Faces. This is a server-side component based on the user interface framework. It is mainly used for developing web applications. It gives a programming model which is well-defined. It has rich API and tag libraries. JSF 2 is the latest version which is using Facelets as a default templating system.

The primary purpose of JSF is to make the construction process of the user interface simple. This UI is used for server-based applications, and the components can be reusable in a page. It connects the UI widgets with data sources. It provides the standard UI components and API (Application Programming Interface) majorly for developing components.

The JSF life cycle begins when the client makes an HTTP request for a particular page. It generally ends when there is a server respond with the page. This life cycle is divided into two primary phases: Execute Phase and Render Phase.

suggest an answer 0 Answer
0 0
13. What is the difference between struts2 and JSF?

The difference between struts2 and JSF are:

suggest an answer 0 Answer
0 0
14. What is managed bean and backing bean in JSF?

Managed Bean: It is a basic bean java class of JSF. This java bean is being managed by the JSF framework. It consists of getter and setter methods and business logic. Managed beans generally work for UI component as a model. It can be easily accessed from the JSF page. Backing Bean: It is a subpart of the managed bean. It contains all the properties of UI components in a JSF page.

This bean is used in UI conversion, component validations, and event handling. Almost all the features of UI components binds with a backing bean in JSF page.

suggest an answer 0 Answer
0 0
15. What is Resource bundling in JSF?

Resource Bundling mainly stores the UI date, label, status messages, and UI textual elements separately in the properties file and does not do any hardcoding in the page. It is one of the most convenient methods. Resource bundles are stored in .inproperties file extension because they are key-value pair of strings. This maintenance keeps the messages in a single place.

@ViewScoped: -As long as the user is interacting with a similar JSF view, the beans are alive. It is usually created on an HTTP request. The bean gets destroyed when the user post-backs to a different view.

@SessionScoped:- Beans are there as long as HTTP session lives. This gets created with the first HTTP request. This bean is destroyed when the HTTP session is invalidated.

@CustomScoped:- This bean is there when it enters in the map of custom. It is created for a particular scope live.

@RequestScoped: -Beans are there as long as the HTTP request-response lives. This usually gets created when an HTTP is requested. It gets destroyed when the HTTP request is over.

suggest an answer 0 Answer
0 0
18. Which tag is used to upload a file on the website in JSF?

suggest an answer 0 Answer
0 0
19. What is the difference between JSF and JSP?

The difference between JSF and JSP are:

The different types of JSF events are:

suggest an answer 0 Answer
0 0
21. Explain the different kinds of bean scopes in JSF?

suggest an answer 0 Answer
0 0
22. What is h: output Text tag in JSF? A h: output Text Tag in JSF is used for rendering a plain text. The presence of "styleClass", "style", "dir" or "lang" attributes are present, then it renders a "span" element. If the "styleClass" attribute is present, then it renders its value as the value of the "class" attribute.
suggest an answer 0 Answer
0 0
23. Explain the differences between a Managed Bean and Backing Bean in JSF?

The Backing bean is similar to the Managed bean in JSF. The difference in the two merely pertains to the usage of the two.

The programmer should create a new XML file and put the managed beans detail inside and declare the XML file in the javas.faces.CONFIG_FILES. This is done to initialize the parameters which are there inside the WEBINF/web.xml. file.

suggest an answer 0 Answer
0 0
26. How to declare the Message Bundle in JSF?

You can declare the message bundle in two ways. The first way which is the simplest way is to state the message bundle by a supply file name faces-config.xml in the Web INF category. Another way is to use a global resource bundle declaration. You can add the f: load Bundle element to each element.

JSF was developed in the year 2001 and was written in Java.

All the popular JSF interview questions and answers have been put together which will be handy if you want to crack an interview. This will be helpful in clearing job interviews and getting a promotion at work.