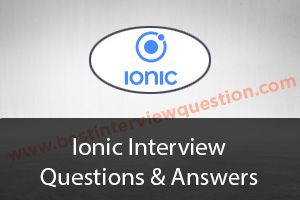 A front-end, HTML5 mobile application development framework, Ionic is designed to build hybrid apps. You can think of Ionic as the framework that manages the look, feel and UI an app needs to be attractive. The ionic structure uses web technologies such as CSS, HTML5, and Sass for developing hybrid mobile apps. These apps can then be distributed through native app stores on individual devices through Cordova.

With built-in native mobile elements and layouts, Ionic offers powerful ways to build mobile apps that are both attractive and have high performance. Ionic being an HTML5 framework, it requires Cordova or PhoneGap to run as a native app. We have recently updated our ionic interview questions. Do read them before your next job interview.

Are you an ionic programmer? Read our ionic interview questions and answers to stay updated.

Here in this article, we will be listing frequently asked Ionic Interview Questions and Answers with the belief that they will be helpful for you to gain higher marks. Also, to let you know that this article has been written under the guidance of industry professionals and covered all the current competencies.

1. How are PhoneGap, Ionic, and Cordova different from each other?
suggest an answer 0 Answer
6 2
2. In Ionic applications, how can data be passed from one view to another?

Ionic apps use UI-router and AngularJS. This means we can use Angular services to pass data from one view to another. Angular services are singletons and therefore data stored can be accessed across controllers.

suggest an answer 0 Answer
6 1
3. Is it possible to render a 5000 item list without affecting its scroll performance? In Ionic, there is an option for collection-repeat directive which renders items that are visible in the DOM. Therefore, even when your lists are long, only items that will be visible in the viewport will be rendered without disturbing the scroll performance.
suggest an answer 0 Answer
2 0
4. What are the benefits of caching views in Ionic applications?

In Ionic, caching of up to ten views is done by default. This improves performance and assists in maintaining different states simultaneously in the views. For instance, cache maintains scroll position in the views or the active state of buttons.

suggest an answer 0 Answer
1 0
5. Is it possible to access mobile phone native functionality, for example, a camera, in Ionic apps?

Ionic does not offer camera API out of the box. But since Ionic uses plugins architecture, you can use Cordova plugins in your applications. Ionic offers a set of Cordova extensions that come with Angular wrappers. You can find them at ngCordova.

Ionic apps are built on AngularJS, which has a rich set of test libraries and frameworks. You can use these frameworks to write unit tests for your apps. In addition, the live reload feature in ionic-CLI can be used to test your apps in the browser. Chrome Developer Tools or Mozilla Firefox can be used to debug and inspect Ionic apps.

suggest an answer 0 Answer
1 1
7. Why is the performance of Ionic apps bad on older Android devices? Can this be improved?

Ionic uses the default web browser available in the device to run hybrid applications. The older versions of Android devices use Android’s default browser, which has less performance and compliance as compared to modern browsers.

This can be resolved by using crosswalk with Ionic. Crosswalk will enable you to pack a Chrome webview so that your application is not relying on native Android browser.

suggest an answer 0 Answer
1 0
8. How is ionic build different from ionic prepare? You may be asked this question during your ionic interview questions and answer.

Ionic prepare copies files directly from the www folder into the www folder of the target platform. Ionic build builds the app’s source code to enable it to run on an emulator/ simulator/device.

suggest an answer 0 Answer
0 0
9. Is it possible to persist data between app launches?

As Ionic builds HTML5 based applications behind the scene, localStorage and sessionStorage API can be used to persist data on mobile devices. However, since localStorage only stores strings, the objects need to be stringified before saving them. It is critical to remember that localStorage has a size limit of 5MB.

suggest an answer 0 Answer
0 0
10. Explain the process for detecting platforms at the runtime?

suggest an answer 0 Answer
0 0
11. How are service/providers used in Ionic?

Services play a vital role in Ionic as it provides information to the application and performs different tasks. Some of the critical services are Simple Alert, Connectivity Monitor, Google Maps and data. If you are using, remember that importing a service and adding a provider to it are the most crucial aspects.

The services should only be imported into the classes where you will be using them.

suggest an answer 0 Answer
0 0
12. What are storage options available in Ionic?

Storage is the easiest way to store key, values and JSON objects in the Ionic Framework. Engines are used in storage. In a web application, storage will use WebSQL, IndexedDB, and local storage. Here are some of the storage available in ionic:

suggest an answer 0 Answer
2 0
13. How will you use observables?

Observables are not specific to Ionic or Angular. These are provided by RxJS library and can do a lot of tasks. They can deal with multiple values simultaneously and can manipulate the data associated with it. However, Observables will not get executed until you subscribe to them.

It is a Typescript wrapper for PhoneGap/Cordova plugins. Its purpose is to ease the process of adding native functionalities to your Ionic app.

Ionic was developed by Adam Bradley, Ben Sperry, and Max Lynch in 2013. They released the first version in 2013, which was built on Apache Cordova and AngularJS and. Potential candidates must know this information if they are preparing for ionic framework interview questions.

Please enter your details to download Ionic Interview Questions PDF
Click here to subscribe our email newsletter to receive updates on the interview questions and blogs.
Hey, care to share your feedback?
Visit our blog