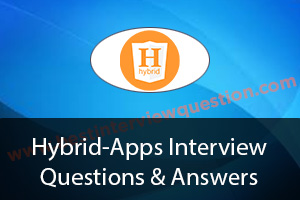 The ANR or Application Not Responding is a dialog box that appears when an application doesn’t respond for more than 10 seconds. The dialog box gives users the option of whether wait till the app finish its running or to close the app.

suggest an answer 0 Answer
5 0
2. How a hybrid mobile application scoped and specified?

Scoping for a hybrid mobile app starts with a long, hard review at the device as mobile devices offer different screen size, form factors, resolution, functionality and computing power. The developer has to understand the invention and how it can be used to achieve the best advantages while ensuring excellent user experience.

suggest an answer 0 Answer
3 0
3. How an operating system improves its battery life while running an app?

This will also help with improving the user experience with the foreground app.

This is a good question concerning hybrid apps interview questions and answers.

suggest an answer 0 Answer
1 0
5. What are the limitations of a native mobile app compared to a hybrid app?

A native mobile application has the following disadvantages compared to a hybrid mobile app:

suggest an answer 0 Answer
2 0
6. Explain the difference between PhoneGap, Ionic, and Cordova?

PhoneGap is a library which exposes native mobile phone functionalities as JavaScript API. After Adobe overtaking PhoneGap, it’s open source core was donated to Apache Software Foundation with the Cordova name. Ionic used Cordova as for its core tools. Ionic offers all the native mobile phone functionalities and provides code and structural scalability to JavaScript applications by using Angular JS.

suggest an answer 0 Answer
2 0
7. How can you render a huge item list in Ionic without affecting the scroll performance?

suggest an answer 0 Answer
0 0
8. Explain the difference between PhoneGap and AIR.

The principal difference between PhoneGap and AIR is that developers can build PhoneGap application using HTML, JavaScript, and CSS, but developers make AIR applications using tools rooted in the Flash Platform.

suggest an answer 0 Answer
0 0
9. What are the limitations or Cordova?

The Cordova has few limitations that we can expect with every hybrid mobile app framework.

The manifest file is a must-have recorded in the root directory of every Android app named as 'AndroidManifest.xml'.

This file includes crucial information about the app, including the application’s Java packages name.

An Intent can be described as an ‘intention’ to do an action. It’s a message to inform developers about the activity they did or if something that to happen. Applications and OS will react accordingly to the intent.

Android has two types of intent:

suggest an answer 0 Answer
0 0
12. How to test an Ionic application?

As AngularJS is used Ionic applications, it has a rich set of test libraries such as Jasmine and Karma available to support the testing functionalities. These available frameworks can be used by developers to write the unit tests for Iconic applications.

suggest an answer 0 Answer
0 1
13. Explain the difference between ‘ionic prepare’ and ‘ionic build.’

The ‘ionic prepare’ function copies all the files from the WWW folder to the target platform’s WWW folder, whereas the ‘ionic build’ function performs the same while building the app’s source code so that the app can be run on an emulator/simulator or a device.