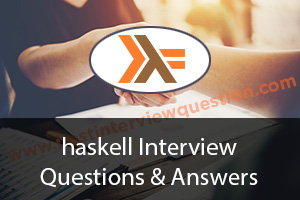 Here in this article, we will be listing frequently asked Haskell Programming Interview Questions and Answers with the belief that they will be helpful for you to gain higher marks. Also, to let you know that this article has been written under the guidance of industry professionals and covered all the current competencies.

Haskell is a statically typed and purely function programming language, especially used for its built-in concurrency, easy integration with other languages and highly feature including libraries. The language is evolved to best evaluating expressions rather than executing instructions.

The latest version of Haskell is version 8.6.3, released in 2010. A group of develop is currently working on the next advance standard named “Haskell2020”.

suggest an answer 0 Answer
0 0
4. What are Monads in Haskell?

There are five types of operators available in Haskell:

suggest an answer 0 Answer
0 0
8. What is lazy evaluation in Haskell?

It’s Haskell program evaluating method in which expressions are not evaluated when they are bound with variables, but the program evaluation is going to defer until their results are required by other computations.Simplifying it, this means call-by-name plus sharing, which is opposite to eager evaluation.

suggest an answer 0 Answer
0 0
9. What is currying in Haskell?

In Haskell, currying is a fact where a function takes n arguments and returns it with a function with n-1 arguments. The fact works when only one argument is applied.

Haskell Zippers are akin to cursors and allow users to traverse trees in an ordered manner. The usual operations of Zippers are up, down, right, left and edit. They are variant of a datatype and unfolds the type into its local context and its all direction extents.

suggest an answer 0 Answer
0 0
11. Explain the types of Modules used in Haskell

Total of five types of modules available for Haskell. Here is a short and brief list of them:

Prelude is a standard module present in Haskell and is imported by default into every Haskell module unless there is an explicit import statement present in the module or module’s NoImplicitPrelude extension is enabled.

In Haskell, functions a functional representation of different types which can be mapped over. It’s a high-level concept of implementing polymorphism — the instances of Haskell functorincludes List, Tree, Map, etc.

Please enter your details to download Haskell Programming Interview Questions PDF
Click here to subscribe our email newsletter to receive updates on the interview questions and blogs.
Hey, care to share your feedback?
Visit our blog