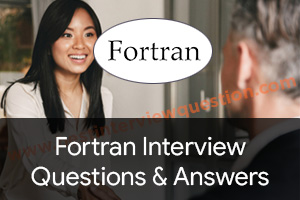 1. What is Fortran? Explain

Fortran stands for FORmula TRANslation.Fortran is the first widely used high-level programming language. Fortran language is used for doing high-level scientific computing, and until today it is one of the widely used languages for this purpose. Fortran was release in the year 1957 which 62 years now. The popular language BASIC is based on Fortran II.

suggest an answer 0 Answer
0 0
2. Why we used Fortran language?

Fortran is nowadays used very rarely but for numerical simulation and large scale, for example, to use it compute scientifically, Fortran has always been a choice of programmers that’s the only reason why it is known as the sophisticated simulation code that is written in Fortran.

suggest an answer 0 Answer
0 0
3. What are the advantages of Fortran Programming language?

Some of the advantages of Fortran are:-

Fortran was developed by John Backus and IBM in the year 1957.

Every computer is limited in magnitude and precision. REAL has a specific number of significant digits. If for a calculation number of significant digits are required then DOUBLE PRECISION is used. For a 32-bit computer range REAL number can be up to 7 decimal digits and will have a magnitude ranging from 10-38 to 10+38. Now, DOUBLE PRECISION REAL numbers have the size ranging from 10-308 to 10+308 and twice the number of decimal digits.

Point to be noted: Go through this Q&A very thoroughly as this is one of the essential Fortran interview questions.

suggest an answer 0 Answer
1 0
6. What do you mean by the array in Fortran?

An array is the collection of datatype or variables. An array is stored in a consecutive memory location. Mostly array is used to store the same data types. In Fortran, up to 7-dimensional arrays can be created. Here the arrays are declared with dimension attribute.

suggest an answer 0 Answer
0 0
8. Why is Fortran faster than C? Explain

Fortran is faster than C in case of numerical tasks. During the execution of the mathematical functions, Fortran handles memory references very well. In C pointers are challenging to optimize while doing mathematical tasks. The Matlab and Numpy are still till date written in Fortran.

suggest an answer 0 Answer
0 0
11. What do you mean by a subroutine in Fortran?

When a programmer writes the subroutine statement in a program, then subroutine can modify its arguments, but it does not return a value.

suggest an answer 0 Answer
0 0
12. What do you mean by the module in Fortran?

This is the favorite interviewer question in Fortran interview questions.

suggest an answer 0 Answer
0 0
13. What do you mean by implicit none in Fortran?

suggest an answer 0 Answer
0 0
16. How to declare variables in Fortran?

The variables in Fortran is declared by using the type statement at the beginning of the program. The syntax for declaring a variable is:-

Here type-specifier can be: -INTEGER, REAL, COMPLEX, LOGICAL AND CHARACTER and the list is the name of the variables that can be separated with commas