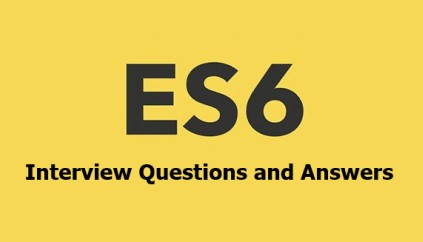 For a few years, ES6 interview questions have been a debatable topic among aspirants. The reason is, of course, its possibilities and functionalities. ES6 is the sixth version of the ECMAScript programming language. The standardized name for JavaScript is the ECMAScript whose version 6, popularly known as ES6, was released in the year 2011, after the success of version 5 of the same. ES6 brought major enhancements to the JavaScript language by adding interesting and new features. ES6 Interview questions for experienced have been tough too since it has been developed due to its huge list of features and applications.

Here in this article, we will be listing frequently asked ES6 Interview Questions and Answers with the belief that they will be helpful for you to gain higher marks. Also, to let you know that this article has been written under the guidance of industry professionals and covered all the current competencies.

1. Explain the difference between ES5 and ES6?
suggest an answer 0 Answer
9 0
2. What do you mean by IIFEs?

IIFEs or Immediately Invoked Function Expressions are the expressions which are immediately executed as soon as it is created. IIFEs are used to avoid the excessive use of global namespace because all the variables which are used inside the IIFE cannot be viewed outside its scope. In other words, IIFEs are design patterns also known as Self Executing Anonymous Functions because it executes on its own.

suggest an answer 0 Answer
8 0
3. Why are arrow functions used in ES6?

Arrow functions are one of the major reasons for the popularity of ES6 due to the reasons mentioned below:

suggest an answer 0 Answer
6 0
4. Explain the motivation behind Symbols to ES6.

Symbols are a particular kind of object, newly added in the sixth version of ECMAScript which can be used as a unique property name in the objects. Using Symbol in the place of String (as it was done in the previous versions) allows the programmer to use different modules that can create properties that will not be problematic to each other. Another huge benefit of Symbols is that they can be made private and the properties defined cannot be accessed by any user or developer who does not have direct access to the Symbol. They comprise of a function that can be used to create different symbols that can work differently. But they do not have any literal syntax, unlike the other primitives of JavaScript.

suggest an answer 0 Answer
4 4
5. Explain the benefits of using spread syntax in ES6. How is it different from the rest of the syntax?

While on the other hand, the rest syntax feature of ES6 is used to pass an arbitrary number of arguments to a function. It can also be considered as a shorthand in JavaScript programming. Rest syntax can be considered as the opposite of spread syntax. It takes data and stuffs it into an array instead of unpacking the data. In addition to that, it works suitably in function arguments, arrays as well as to object destructuring assignments.

Note: This question is asked in almost all ES6 Interview Questions.

ES6 classes have been found to be very useful to the developers. Some of the major uses of ES6 classes are as follows:

suggest an answer 0 Answer
5 0
9. What is a generator in JavaScript?

With the launch of ES6, a new way of working with functions and iterators came into work. These are called generators. A generator is nothing but a function that can stop at the point of time when the user commands it to do so and then continue working just from the point where it stopped. In other words, a generator has properties of a function but also works as an iterator. It does not work like other lines of code which need to be completed for execution.

Generators work on a run-to-completion model which makes it easier for the developers to compile a program. Generators can also be defined as a special class of functions that work to simplify the task of coding iterators in a program. It produces a sequence of results rather than producing a single value. It enables the developer to generate a series of values at a time.

suggest an answer 0 Answer
2 0
11. What is spread, default and rest parameter?

Spread Operator- Donated by ‘...’ and is followed by the variable. The syntax of the spread operator would look like this for example:- ‘...X’. Spread operators manipulated objects and arrays which is the prime reason it is used in ES6. It is used for copying the property of one object to another.

Default Operator- In order to initialize a function using default values, the default operator is deployed. The parameter’s value can be anything- a number or a function or null.

Rest Parameter- This operator is used for recovering all the arguments that are required to invoke a function. This allows us to put items belonging to different categories separate. The rest parameter allows combining the parameters in a common array parameter.

suggest an answer 0 Answer
3 0
13. What is the advantage of using Webpack?

The advantage of a web pack is explained through its description above. It helps in making a bundle of the project modules into a single javascript file. Webpack combined the Dev server which helps in updating the code and asset management.

suggest an answer 0 Answer
3 0
14. What are the classes and proxies?

Class- You can use the patterns easily with OOP based class declaration. It works readily with constructors, supports base class access, inheritance and static methods. OOP refers to Object-Oriented Programming.

Proxies- With proxies, you get to create objects and you can host the objects with a huge behavior diversity. Proxies can help in profiling and logging as well.

You can call the immutable variables as constants. The value of a constant once defined remains the same and we cannot change it. This is the value that you introduce during the declaration. For example, const Y= 6.0. This value of Y would continue to be 6 throughout and it won’t be changed.

The main aim of developing ES6 is to make large scale software development easier and less complex. ES6 helps the developers to write codes in a cleverer way which culminates in the resultant code being more modern and easily readable. It solely focuses on writing less code and doing more work with. ES6 has been observed to have great performance and less consumption of memory which has made it favorable among developers all around the globe. It has also introduced various new revolutions in JavaScript like the arrow functions, template strings and template literals, const, let default parameters and many more. Some of the ES6 interview questions and answers are as follows :

Please enter your details to download ES6 Interview Questions PDF
Click here to subscribe our email newsletter to receive updates on the interview questions and blogs.
Hey, care to share your feedback?
Visit our blog