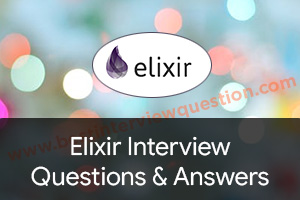 Elixir is a functional and dynamic language that is designed for building scalable applications. It is based on Erlang language VM which is known for running fault-tolerant and low-latency systems. Erlang was written in 1986 by Ericsson to help address fault-tolerance and concurrency. Offering useful tooling and extensible design, Elixir is supported by meta-programming and polymorphism.

Elixir was created in 2012 by Jose Valim on top of the Erlang VM called BEAM.

Latest Version: he latest version is 1.7.3 which was released in August 2018.

Here in this article, we will be listing frequently asked Elixir Interview Questions and Answers with the belief that they will be helpful for you to gain higher marks. Also, to let you know that this article has been written under the guidance of industry professionals and covered all the current competencies.

1. What is Elixir? Explain

Elixir is a functional and dynamic language that is designed for building scalable applications. It is based on Erlang language VM which is known for running fault-tolerant and low-latency systems. Offering useful tooling and extensible design, Elixir is supported by meta-programming and polymorphism.

suggest an answer 0 Answer
2 3
4. How many types of data types does Erlang provide?

suggest an answer 0 Answer
0 4
5. What is Open Telecom Platform (OTP)?

An open source platform, OTP is a huge set of Erlang libraries to do all kinds of tasks, from assembling ASN.1 to providing a server.

suggest an answer 0 Answer
2 0
6. How is run time error handled in Erlang?

Using Catch or Try can help prevent run-time errors from causing the process to terminate. Catch Expr throws value of the expression, except when an exception occurs during the evaluation phase. Try Exprs is nothing but the enhancement of catch with the added ability to identify and handle the desired exception class.

suggest an answer 0 Answer
0 2
7. What are the modules? How can a module be stored?

Erlang enables to put together code into modules, which consists of functions. A module introduces local scope of functions, both Public and Private. A module is stored in a file named “.erl.” Make sure the file basename and the name of the module are the same.

A process is created by calling spawn, which forms a process and returns the pid. Here’s how you can do it:

suggest an answer 0 Answer
1 1
9. What is guard sequence?

suggest an answer 0 Answer
1 1
10. What are some of the valid guard expressions?

suggest an answer 0 Answer
0 0
11. How is a message sent and received in Erlang?

For receiving a message, you can use Pattern Matching from the message queue receive a statement.

Spawn/ 1l3 creates a new process and return pid. In the system scheduler queue, the new process is created so that it runs later.

Spawn_link/1l3: provides the same functionality as spawn/1l3 but with an additional link that gets automatically created between the caller and the new spawn process.

suggest an answer 0 Answer
0 1
13. What is the syntax to write Macros?

suggest an answer 0 Answer
1 1
14. What are some of the pre-defined Macros in Erlang?

Here are the pre-defined Macros:

The data structure that is used for storing a fixed number of elements is referred to as a record. Expressions are then translated into tuple expressions during the compilation record.

The Record is defined by the name of the record, which is followed by the field names. The record and field names should be atoms.

suggest an answer 0 Answer
0 0
16. What is the command for accessing record field?

Expr#Name.Field. This command returns the value of the mentioned field. To return the position of the specified field, you can use the command #Name.Field.

It is a small server that is used for establishing distributed communications. This name server is responsible for mapping the node names to the machine addresses.

suggest an answer 0 Answer
0 0
18. What are the main operators in Elixir?

Following are the main operators:

suggest an answer 0 Answer
0 0
19. What is String Interpolation?

It is a way to build a new string value where the code is wrapped in curly braces and ‘#’ function.

You can define Structs by using the defstruct. Here is how you can do it:

Please enter your details to download Elixir Interview Questions PDF
Click here to subscribe our email newsletter to receive updates on the interview questions and blogs.
Hey, care to share your feedback?
Visit our blog