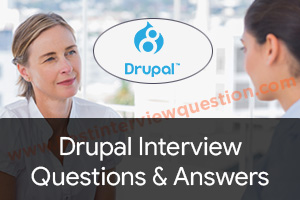 Drupal is an open-source PHP content-management framework distributed under the GNU General Public License. The frame provides a back-end framework for a lot of websites worldwide. It offers a sophisticated API, and the basic installation and administration require no programming skills. It runs on any platform that supports a server capable of running PHP and a database for storing content. To get into complete the complete details about drupal interview questions we are mentioning Questions and Answers that can be a help to you.

Q. 1.What is DRUSH used in Drupal?

It is a very useful tool as it helps you perform various admin tasks using one or two commands in the terminal, replacing the need for many clicks and page refreshes in the UI. "DRUSH" is an awesome shell interface for managing Drupal right from our cloud server using command line.

Hooks are how modules can interact with the core code of Drupal. They make it possible for a module to define new urls and pages within the site like hook_menu, to add content to pages like hook_block, hook_footer, to set up custom database hook_schema and more.

It is a powerful core module, gives our sites use of the organizational keywords known in another systems as categories or tags, or metadata. Taxonomy allows you to connect, relate and classify your website's content. These terms are gathered within "vocabularies". It is the practice of classifying content.

It are just like any other theme, with one difference:

They inherit the parent theme's resources.

It has no limits on the chaining capabilities connecting sub themes to their parents.

suggest an answer 0 Answer
2 2
Q. 8.How to modify the form validation in Drupal?

suggest an answer 0 Answer
2 1
Q. 9.Why we used template.php in Drupal?

It allows you to override a theme function. It is available in the theme directory.

Drupal does not allow adding PHP code directly inside a post or in a block by default.
To do this, we need to activate a drupal module called PHP filter via Administer Site building Modules.

Adding regions to a theme requires two things that's are given below :-

It is a Content Management Framework, from which we can build a CMS tailored specifically for our needs.

suggest an answer 0 Answer
2 1
Q. 23.What is the latest version of Drupal?

suggest an answer 0 Answer
1 2
Q. 24.What is caching in Drupal Framework? Explain

Caching is a popular technique to optimize the website. Caching is a process that stores HTML, CSS, Image in some accessible space. It allows us to speed up our website using different configuration like page caching, block caching and lifetime for cached pages.

It is an acronym for PHP Data Objects. It is a lean, consistent way to access databases. PDO is just like a data access layer which uses a unified API.

To enable PDO, configure --enable-pdo and --with-pdo-sqlite --with-pdo-mysql or whatever database needs supporting by PDO

For windows users : For Apache, you will need to make sure php_pdo.dll and php_pdo_mysql.dll exist in the php/ext directory, un-comment or add the appropriate lines in php.ini, after that you have to restart the web server. In windows it may no longer be required to enable PDO when using newer versions of PHP, PHP version 5.3 and later. It refers to php_pdo.dll. However, you still need to activate php_pdo_mysql.dll for MySQL or for whichever database you are using.

suggest an answer 0 Answer
2 0
Q. 26.What is module and List out some of the modules used in Drupal?

A Module is a collection of files which containing some functionality and is written in PHP because the module code executes within the context of the site.

In Drupal some of the modules recommended here :-

Some of SEO modules available in Drupal thats are given below:-

suggest an answer 0 Answer
3 0
Q. 28.What are the Databases Drupal supports?

It is an advanced web-based course and collaboration environment. It is a set of tools designed to help instructors, researchers and students create course websites and project websites. It include Views and Panels.

It is a structured file that consists of a list of differences between one set of files and another. All code changes, additions, or deletions to Drupal core and contributed modules or themes between developers are done through patches in Drupal.

Drupal was written as a message board by Dries Buytaert. In the year 2001, it became an open-source.

Latest Version: The latest version is Drupal 9.0.x released on 2nd December 2019 but might be this is not stable. The current stable version is 8.7.10 which released in 13th November 2019. This question was frequently asked in drupal 8 interview questions.

The following are the Drupal Interview Questions and Answers for Experienced that are most likely to be asked: