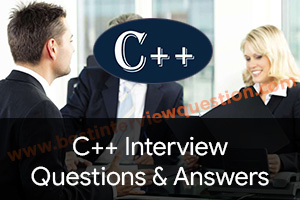 Developed as “advanced” version of C, C++ works on similar concepts of C language while making significant performance gains in hardware. C++ is one of the top words STILL used on the world’s high web applications like facebook.com, google.com, youtube.com. C++ is also used to make games, and it is a hugely popular language in legacy system applications. We are also highlighting some of the C++ Interview Question and Answers for freshers and experienced as well.

C++ is the object-oriented programming language.C++ is considered as one of the most esteemed languages to work with when it comes to Operating systems, and games.C++ language is a middle-level programming language designed by Bjarne Stroustrup in the year 1979 in Bell Laboratories. It is an object-oriented language that has features like Inheritance, Polymorphism, Encapsulation, and Abstraction.

It is used to teach the graphics libraries in high-level applications and the applications that are used to communicate with devices over the network.

The benefits of C++ language are:-

C++ is called OOPs because it supports Object-oriented Programming which means C++ look into the problem regarding objects rather than the procedure for doing that problem.

Class:- Class is the collection of the same type of objects and objects are the variables of the type Class and once the Class has been defined any number of objects can be added to that same class. For examples Eagle, Sparrow, Pigeon, Crow are the objects of the Class Bird

Objects:- Object is the collection of the entities, and the objects occupy the space in the memory. An object contains data and code. When any program is executed the objects interact with each other by sending the messages without knowing their data and code.

The simple meaning of polymorphism is more than one form. In C++ a program can have more than one function with the same name that can perform different activities

Types of polymorphism in C++

In C++ loop is used to perform specific repetitive tasks until a condition is satisfied.

1.FOR LOOP
for ( variable initialization; condition; variable update ) {
// Code to execute while the condition is true
}

A member function of a class in C++ is a function that has its definition or its prototype within the class like any other variable. Member function operates on an object of the quality of which it is a member, and it has access to all the members of a class for that object.

C++, a general-purpose object-oriented language was developed by Bjarne Stroustrup of Bell Labs in the year 1979. When C++ was developed its name was C with classes, and it was built as an extension to the C language, but later it was named C++ in 1983 which means the increment of C by 1.C++ has the features like Classes, Abstraction, and Inheritance.C++ is considered to be a little complex language

Here are some of the essential C++ interview questions and answers that will support you in learning the C++ language basics.

Since it is a complex language, it is essential to know the basics accurately to start doing the programs, and therefore we have given you some essential C++ technical interview questions and answers so that you can learn the basics very well.