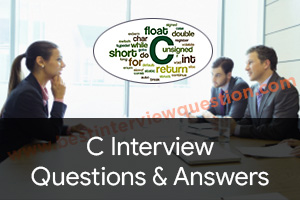 C is a robust, powerful and fast general-purpose programming language. For fresher developers, C can be an excellent choice to start their programming journey. If you are preparing for the C language job interview, we have one of the biggest collection of C Interview Questions.

It is portable and available on all platforms. A lot of programming language such as PHP, Java, and JavaScript that made their entry after the C language has directly or indirectly borrowed features and syntax /features from it. C++ language is almost an extension of the C language. A lot of recent C programming interview questions were based on this information.

Here in this article, we will be listing frequently asked C Interview Questions and Answers with the belief that they will be helpful for you to gain higher marks. Also, to let you know that this article has been written under the guidance of industry professionals and covered all the current competencies.

1. How is a NULL pointer different from a Dangling pointer?
suggest an answer 0 Answer
2 0
2. What are local static variables? How can you use them?

A local static variable gets defined in a specific block and is accessible locally inside that block only. However, because it is static, its value is persistent. Its lifetime does not end when a function call is declared. Instead, its lifetime extends throughout the program. Local static variables can be used for counting the number of times a particular function is called.

It is a mandatory step to create an algorithm before writing any program in C. An algorithm gives step-by-step guidelines on how a solution can be achieved and also serves as a blueprint on how a program should start or end, including what processes and computations must be involved.

suggest an answer 1 Answer
0 0
8. What is an array? What the different types of arrays in C?

An Array is a group of elements having similar data types under a common name. In an array, the two-dimensional elements are stored in rows as per the memory locations. An element's array name represents the address of that element. It must be noted that the size of size is always constant and never a variable.

suggest an answer 0 Answer
1 0
9. What do you mean by dynamic memory allocation in C? What functions are used?

It refers to the mechanism by which storage or memory gets allocated dynamically to variables during the runtime. This mechanism uses malloc(), and calloc() functions to allocate memory dynamically.

These structures are statements that are used to control the flow and direction of the execution of a program in C. It brings together instructions and logical unit. Control structures have two main classes - conditionals and loops.

There are three different types of control structures are - Selection, Sequence, and Repetition.

C is a robust, powerful and fast general-purpose programming language.C is a robust language with a rich set of built-in features and functions that can be used to build any complex web program. The C compiler has the potential of an assembly language and functionalities of a high-end language.

Developers can use C language for developing system applications that are forming a huge portion of OS such as Windows, Linux, and UNIX. Most of the OS, C compiler and application programs in UNIX today are written in C.

suggest an answer 0 Answer
0 0
14. Who developed C language and when?

One of the biggest benefits of learning the C language is that it is recognized worldwide and used in hundreds and thousands of applications worldwide, including scientific operating systems. This language combines the features of high end and basic languages. As a result, you can freely use it for starter-level programming as well as high-level programming such as scripting for complex applications.

Recursion is a function that calls itself. It is easy to write in the program, but it requires a lot of memory space and execution time. The advantage of using recursion is that developers can avoid unnecessary calling of functions by substituting with iteration.

You can use pointers in a C program for getting the location of a variable, or for achieving pass by call reference. This is because pointers allow various functions to modify and share the local variables. You can also use a pointer for implementing “linked” data structures, such as lists and binary trees. Have you read our rest of the Interview Questions on C?

suggest an answer 0 Answer
1 0
22. What is static memory allocation? Explain

Structures are a collection of various data items of different data-types. Like an array, each member in a structure is located next to each other.

suggest an answer 0 Answer
0 0
25. In C language can we compile a program without main() function?

Certain reserved words in C, which are known and understood by the compiler are called keywords. The meaning of these keywords is already known to the compiler. Keywords are always written in small case letters, and cannot be used as the names of variables as that may change their meaning. Some of the standard keywords are – auto, case, break, float, extern, etc.

In C language, data types mean an extensive system that is used for declaring the functions or variables of different types. The kind of a variable used will determine how much space it will occupy in the storage and how the stored bit pattern will be interpreted.

Some of basic data types in C are:

suggest an answer 0 Answer
0 0
32. How many types of errors are there in C language? Explain

This is a typical Embedded C Interview Questions. There are three error types in C language – Runtime, Compile and Logical.

Runtime errors may occur when the program is being run, usually due to illegal operations performed.

Logical errors occur in the output due to errors in the logic applied in the C program.

The modifier is a prefix for a basic data type that is used for indicating the modification required in the storage space allocated to the variable. A total of five modifiers are available in C programming – Short, Long, Signed, Unsigned, and long. This information is critical for Embedded C Interview Questions.

Strings are an array of characters that end with a null character (‘\0’). The presence of null character specifies the end of a string. Remember, strings should always be enclosed by double quotes.

Most used functions in the string library are listed below:

Comments are an amazing way to insert remarks in a program that can serve as a reminder of what a given program is all about. Get more knowledge of this topic if you are preparing for Interview Questions on C. You can also add a description of why a certain function or code was placed in the first place.

Comments begin with /* and end by */ characters. Comments can be single or several lines and can be placed anywhere in the C program.

C is a robust language with a rich set of built-in features and functions that can be used to build any complex web program. The C compiler has the potential of an assembly language and functionalities of a high-end language. The programs written in this language are robust and efficient, mainly due to its unique data type and strong operators. Much faster than BASIC, it is one of the most widely used languages in OS and embedded system development. On our website, we have provided potential C interview questions.

As a programming language, C is one of the best languages known due to its simplicity of syntax coupled with fantastic functionality. Despite being 40 years old, C language is still trendy. One of the biggest reasons is that the source code written in C works in another OS without a single change. This language is a perfect mix of ease of use with robust features, which makes it an ideal language to be taught to even fresher developers, with an aim to introduce the programming world to them. We can help you prepare for C Interview Questions and Answers by educating you in-depth about this language.

Initially developed during around 1972 - 1973 at Bell Labs by Dennis Ritchie, mainly for writing OS like UNIX. Some people call it a successor of the B language that was written in the early 1970s. This information is mostly asked during C interview questions.

Many candidates were asked about the features in the latest versions during about their C Programming Interview Questions. C18‎ is the latest stable version, which was released on June 2018.

Please enter your details to download C Interview Questions PDF
Click here to subscribe our email newsletter to receive updates on the interview questions and blogs.
Hey, care to share your feedback?
Visit our blog